The rain was pitter-pattering down from the sky, cascading from the dark grey clouds. Peeking through the clouds was the orange light of the setting sun, the burnt sienna tint a small streak across the dark silver sky. Underneath the leaf, Eric shook, his plastic body freezing under his camouflaged jacket. The stump was flat, but it wasn’t flat enough. He looked over, and Mary was still stuck in the rain, the leaf above her head weighted down by the pouring rain.


“This is horrible,” she grumbled.


“No, I’m not cold,” she chattered through clattering teeth, “I’m freezing, my hair is wet, it’s completely knotted, and I can’t-“


She turned to look at Eric, and he was unzipping his jacket, revealing a skin-tight black tank top pressing against his chest, with every raindrop patting the cloth tighter and tighter against his torso.


“It’s okay,” she smiled, half-attempting to push the jacket aside, “I really-“


“I’m not cold, Mary, I swear.” He scooted closer to her, looking into her dark azure eyes, and letting out a little puff of air. A little cloud fizzled up from his lips, and Mary giggled, blood rushing to her cheeks.

“It’s raining, it’s only going to rain harder, and I don’t want you getting sick.” A weight in Mary’s stomach lightened as the warm cloth fell over her shoulders. Delicately, she wrapped her hands around the cuffs of the jacket and pulled it over her thin silk top, wet and weakened by the rainwater. She let out a long breath, her own little cloud of air fizzling in front of her face, and she stared at Eric, feeling a warmth run down her back.


The rain began to fall heavier, and the sounds of the forest began to pick up. The echoes of the cicadas rang out in a soft harmoniousness, and the drip-drops of the pitter-pattering rainwater began to pick up its tempo like a snare drum, a million chords of the orchestra of the forest resounding all at once. Biting the edge of her lip, she sighed, slowly moving towards Eric.


Mary tucked the jacket tight around her shoulders, and felt a warmth start to flow down her body. Ripples upon ripples of goosebumps started to form along her arms, and she blushed, trying to hide her arms under the jacket. She pulled the sleeves down more and more, but she couldn’t manage to cover her arms.
Suddenly, Eric’s hand was on her shoulder, and she stopped.


“Thanks for the jacket.”


“No problem.” He smiled, slowly moving his hand from her shoulder to her other shoulder, his fingertips dancing across the back of her jacket. Mary felt warmer, secure, she felt a new feeling. Here she was, sitting underneath a leaf in a middle of some random forest, surrounded by impossibility and unpredictability, and yet, there was something within her that felt fixed, attached, almost protected.


“My hair is so knotted, this is disgusting.” She ran her hand through her hair, and her hand kept getting caught; she couldn’t push her fingers through. “I can’t even work my fingers through it-“


“I might be able to help.” She felt his fingers run through her hair, and she let out a long, exhausted breath.


“My fingers are longer than yours. I might be able to push the knots out.”


“Are you okay?” She felt a hand rest on her shoulder, and she felt another run down the back of her spine. She nodded.


“I’m fine.” With a gulp, she nodded again. His hand was soft on her shoulder, and if anyone was going to run his hands through her hair and make her feel delicate, special, like she was worthy of something, it was going to be Eric. She flipped her hair over her shoulder and shut her eyes. “Go for it.”


Carefully, Eric wove his hands into her hair. It’s just wet silk, he told himself, this shouldn’t be so hard. Never before had Eric woven his hands through anything, let alone someone else’s hair. He pressed his fingers along the silk, letting it balance between his fingers like fine cloth. When his hand met the first knot, he wove his fingers through, and pulled.


“Ow!” Mary shot her hand back and grabbed her hair, wincing in pain.


Leaning back, Mary shut her eyes. The way that Eric’s hands moved through her hair, felt like white caps rolling across the ocean. It was therapeutic, the way his hands danced through her hair, and once again she felt safe, entranced by the way his hands moved. The knots weren’t painful anymore. Every time one of the knots broke, a pulse of energy went through Mary, and she would breath out. She was relaxed, comfortable, and as the last knot was split in two, the corners of her mouth had folded into a smile.


“There.” Eric sat back, and ran his hand through her hair one last time. “That should do it-“


As his hand reached her shoulder, she wrapped her hand around his, interlacing her fingers with his.


She turned around, smiling, and let out a long breath.


It was Eric’s turn to blush. He felt his cheeks to warm, and he walked towards Mary. She stood up to meet him, moving out from under the leaf and into the pouring rain. The water soaked into her blonde hair as it fell over her shoulders, and the jacket’s color grew damper and damper.


Slowly, Eric wrapped his other hand around hers, and soon, they were entangled. Mary shut her eyes, and smiled, her teeth whiter than fresh ivory. Before Eric could say anything, as the rain pounded against the two of them, Mary sighed, tossing the jacket from over her shoulders onto the ground below.


Mary gripped the front of Eric’s shirt and pulled him close, kissing him. And so the rain kept falling. Eric’s shirt was a tight cloth strapped to his chest, and Mary gripped the white cotton as tight as she could with the tips of her fingertips, pressing Eric’s lips to hers like the first kiss of wedding bells. And Eric was no different, the butterflies in his chest swirling and dancing like a lead in the wind. And the rain kept falling, and falling, and falling, and Mary pulled him tighter, and tighter, until she pulled back, her emerald eyes gazing into his cerulean pupils.


And they stood, hand in hand, her hair dampened by the pitter-patter of the plummeting raindrops. She looked down at her hands, and quickly stepped back, rubbing her right hand up and down her left arm.


“Sorry,” she whispered, gazing off at a tree stump way off to the left. “I-“


“That was amazing,” he blurted, staring off into the distance. His head felt weightless, like a helium balloon had been released in his gut. There was no tension, no worry, and no anxiety plaguing the atmosphere like an airborne plague, but instead a feeling of wonder, a sense of bewilderment that had struck Eric like some emotional epiphany.


And there she was, sitting in the pouring rain, her silk white shirt sticking to her top and her torn blue jeans faded, tattered, and beautiful in the cascading rain. Slowly, he walked back towards Mary, and let out a long exhale that echoed off the walls of the forest. He opened his mouth to speak, but before a sound could come out, Mary gripped his hand, and smiled.


“I like you.” The warmth returned to her cheeks, but it wasn’t an uncomfortable warmth anymore, it was the warmth of a fireplace during a cold winter, the warmth of a hug after years of separation. “A lot, actually.” She giggled, and ran her hand through her soaking-wet hair. “You’re different, and you have been since I met you.” She looked down towards her side, and tightened her grip. “You’re comforting, you’re sweet-“

“Stop.” When she looked up, Eric was smiling, but his cheeks weren’t red and his eyes weren’t wavering. The light-blue reflection of his eyes glowed radiantly, and he gently raised his hand to Mary’s cheek, running his fingers down her cheek.

He pulled her in, and she gripped his triceps, and pressed her forehead to his, and they kissed.And they kissed, and they kissed. It was a long kiss, passionate, the tumultuousness of the forest melding into a quiet tranquility, the world surrounding the two melting away as they embraced the other, as they kissed, the world quieted down, the world stopped spinning and time slowed to a steady andante, the orchestral symphony quieting to a whisper, as she pressed herself against him, wishing to pull the world away and leave them to be, as he ran his hand through her golden blonde hair and delicately run his hand down the cusp of her shoulder blade, and they broke away, and they stood in awe at each other, the gems in their eyes like shining stones in a cavern of jewels.


Then, encompassed by the sounds of the forest, in the dark of the night under the cradle of stars, the two lovers kissed again. 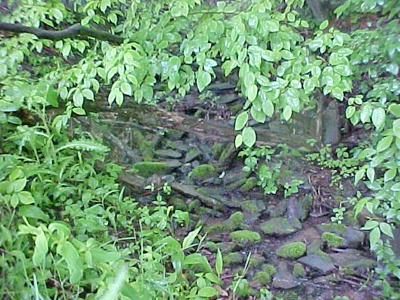 WolfWhisperer0911 BRONZE said...
on Mar. 3 2017 at 10:04 pm
WolfWhisperer0911 BRONZE, Austin, Texas
1 article 0 photos 623 comments
View profile
Metalhead36, that's is the best romantic story that I had ever read! I really give a full 5 stars for that and would love to read the full book about it. Now that you made this story, I am now getting an idea for a story. Thanks and have a God-Blessed Day!
valkyrie1212 BRONZE said...
on Feb. 5 2017 at 12:37 am
valkyrie1212 BRONZE, Adelaide, Other
2 articles 0 photos 34 comments
View profile
Btw, I put spaces between the pointers, but I guess when you post the comment, it doesn't show. So my comment might be confusing to read ://
valkyrie1212 BRONZE said...
on Feb. 5 2017 at 12:35 am
valkyrie1212 BRONZE, Adelaide, Other
2 articles 0 photos 34 comments
View profile
@Metalhead36 This was a very nice, romantic story. I especially loved the imagery - it had a lot of flow, and I could visualise everything perfectly. Here are some pointers: - What I think your story needs is a little backstory. There are heaps of space in there where you can add some backstory for the characters, for example when Eric imagines the hair as silk - maybe he could remember back to the time when... This will give characters a more rooted feeling, and readers will get to know them better. - Why are they standing out in the rain? - It will be great to see more characterisation. Readers want to get to know characters, and also subconsciously root for them! Other than that, I think this was really good. It captured a very special moment that became the driving force all the way through. Great romantic story, and I can't wait to read more!