The flowers bloom around the granite gravestone.

I sigh, and plant a tulip. It?s the third tulip. Each time I bring a different color for him. Today I have a yellow one.

I wipe my hands of dirt and squint at the stone, futilely trying to hold back my tears. It?s useless. They stream down my face. They?ve engraved a path in my face now. It?s nothing new.

You were a great husband.


?You were a great husband,? I whisper, hoping he hears me. I know he?s here. ?And father,? I add, which causes an epidemic of more tears.

I look down at my stomach, still flat, and back to the flowers. ?John,? I whisper, ?we?re going to be parents.? I smile sadly, and place a protective hand over my abdomen.

He smiles. His eyes are here with me now. They stare into me. They reach into my soul and know everything. They know everything about me and more. ?I love you too,? he murmurs softly.

He?s wearing his blue basketball jacket, the one he used to wear in college. I used to go to all of his games. In my junior year I volunteered to be the team manager. The coaches laughed in my face. I said I?d do anything. So, that?s how I became the water girl for the Blue Devils.

I accidentally bumped into John during practice one day. He forgot something in the locker room, where I was clearing up. That was my second job, laundry girl. I can feel he sweat on my forehead now, just thinking about it. Running at full speed, he knocked me down onto the tile floor. I can?t remember what happened next, but I remember when I woke up in the trainer?s office, he was there sitting next to me. I slowly got up, and his hand was clasped around mine. He noticed me staring and smiled.

?Are you okay?? he asked, sincerity ringing in every ounce of his voice.

I nodded, speechless. He was beautiful up close. His warm brown eyes searched my eyes. Finally, I smiled back at him. ?Yes, I?m fine. What happened??

He chuckled. ?I sort of tackled you.? He explained the whole story to me, until his words wipe the puzzled expression off my face. He introduced himself as John Turner, a fact that I already knew, but gladly kept to myself.

I smiled at him, ?Emily McCarthy.?

He grinned back. ?It?s a pleasure to meet you Emily.? I remember the way he said my name that first time. That was when I knew. I knew he had me hooked like a drug. I was addicted to John Turner from that moment on.

He smiles sadly now. He is reminiscing as well.

?I miss you,? I admit, though I?ve admitted this to him many times. It?s not a secret to him, or to anyone else.

?I miss you too,? he confesses. This is the first time he?s told me this. I smile.

His sad smile looks even sadder, because he knows deep down he wants this too. ?Emily,? he says softly. ?I?m always with you. Forever.?

This is what he usually says before he vanishes, but I act quick. ?What about the baby?? I ask. ?Our baby.? I say more softly.

?What about him?? he asks, grinning.

?Remember to tell him that his daddy loves him. Forever.? He says solemnly before leaving me.

?I love you, John,? I sob into the empty, unsatisfying air. He?s gone.

April fifteenth of 2008 was no doubt the worst day of my life. Some could argue that April sixteenth was, but they all mush together for me.

It was exactly four weeks ago:

We were drinking our daily morning coffee together at the table. John was reading the newspaper, like he did every day. When we were in college, he vowed that as soon as we had our first real apartment he would read the paper everyday, just like his father had.

John was a sports journalist. His biggest goal was to be broadcast on ESPN.

?So, Mr. Roberts thinks I may have a good chance of making front page sports one of these days,? he said, ecstatic.

He beamed at me, his cheeks red. He blushed whenever he was embarrassed.

?That?s not even the best part,? he admitted. He waited for me to urge him to continue.

?He said Sports Illustrated is interested in me! He said they saw my article on the Devil Rays and they might call me this week. So, if anybody calls, just, you know, let them know that I?m interested.?

My grin spread from cheek to cheek until it hurt to smile any wider. ?Congratulations, John!? I exclaimed. I jumped out of my seat, and leapt onto him. I squeezed him tight in a hug, and kissed him passionately on the lips.

He chuckled. ?I should tell you good news every morning.?

I fake slapped at him. ?Very funny.?

Just as we were mock-fighting, the telephone rang. John leapt up from underneath me, and bounded toward the phone.

?Hi, John Turner speaking? Yes, hello?.? he was smiling. He mouthed to me ?It?s Sports Illustrated?. ?Yes, yes?. Why yes, of course I?m interested,? he beamed into the phone. ?Really?? Of course?. Yes, I can be there in fifteen minutes!? Thank you, sir. Thank you so much!? he said before hanging up.

He bolted for the foyer, where his briefcase was. ?They want to meet with me, right now! I have to go. I guess I?ll see you tonight, Em!? he said as he rushed out of the apartment.

I stood by the door, while he ran out. ?I love you!? I called out after him.

No ?I love you? back. No last kiss. No chance to say goodbye.

John ran out into the rain and out of my life that day. Living in the city can be a dangerous thing sometimes. It certainly was that fateful morning. John planned on walking to his meeting. It was only four or so blocks away. He ran out into the street. Meanwhile, a hasty cab driver, blindly sped around the corner. It was too late. His car skidded across the slippery black road. John was dead in an instant. The medical examiner told me he was gone before he could feel any pain.

I rub my stomach. ?He loves us,? I say to the wonderful, miraculous thing inside me. ?Forever.? 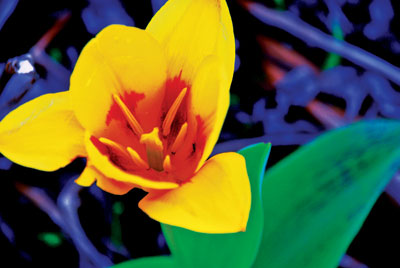 Favorite Quote:
"The stars are blazing like rebel diamonds cut out of the sun" -The Killers (Read My Mind)

"If you don't know where you're going, any road will take you there." -George Harrison

View profile
wow u did a really good job, i no every1 says this but, keep writing