Favorite Quote:
"Im not crazy, my reality is just different than yours." - Cheshire Cat (Alice in Wonderland)

I try not to lose sight of Cameron in the crowd as I scrape gum off of the sole of my Chucks. When I look up again and realize that I’m lost. S***, he has my phone too. Cause of death: yearning of smartphone accompanied by hot potential boyfriend. Someone taps me from behind. I turn around, half scared, “Looking for me ?” He says alluringly, followed by a playful smile. “Yeah, I looked down for a sec-” He puts his finger to my lips and points to a ferris wheel at the opposite end of the carnival. His hand smells like pennies, gross. We make our way to the ferris wheel, passing colourful and blaring booths. Under a fortune teller booth, the woman sitting behind a crystal ball yells “LIA !” I stop walking, how does she know my name…? I walk towards her and her eyes open wider and wider, if they open any wider her eyeballs will fall out of their sockets. “Oh Lia...Show me your hand dear.” I sit down on a velvety stool opposite to her as she tugs at my palm. “...How do you know my name ?” I say. “They told me,” She points to the crystal ball. Suddenly Cameron tries to get me to stand. “This is bull. The lines are getting longer, c’mon.” He says. I remain seated while the woman frowns at my palm. “I knew it ! I felt it when you were walking near us. Lia, there’s danger, look at those angry lines,” She traces a line on my palm. “They tell me to tell you not to trust anyone.” She looks at Cameron with a worriedly as she whispers “You must tread with cautio-” Cameron literally pulls me away before she finishes. “Why were you listening to that psycho ?” he says. “I don’t know, she knew my name Cam.” I say. “Lots of people are named Lia.” He says defensively. Why’d he get so touchy after she looked at him ? We get to the ferris wheel, but instead of waiting in line we go to the back, where the underground tunnels are. It looks shady, I start to turn away when Cameron’s hand weaves through mine, leading me towards the tunnel. “Where are we going ? The lines over there.” I say. “I used to be an employee, we can cut from here.” I look at the tunnel again, it’s looks like a crime scene without the yellow tape. I grimace and he notices. “C’mon, we barely have any tickets left and the tunnel isn’t long.” I really don’t wanna go until he looks at me deeply and squeezes my hand. I swear his eyes were glowing. We enter the tunnel and it reeks of a familiar iron-like odor.We walk deeper, the darkness and the stench grow stronger. “You sure this us leads back up Cameron ?” Silence. His hand gets warm before he grabs both of mine and pushes me against a slimy wall. He breathes loud and heavy. “Cam,” I laugh nervously, this is the furthest we’ve been. “Not here” I say. His hands move to my throat, his nails are too sharp for a boy. “Cam,” He finally looks at me, with glowing red eyes. 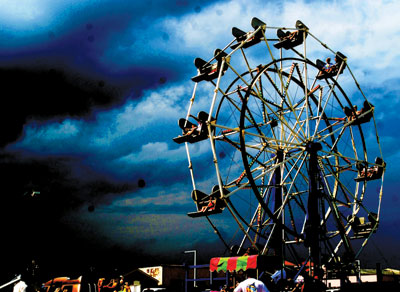 This was a 500-word short story assignment I wrote for my Writer's Craft class. Carnivals have always had a spooky feel to them in my opinion, so I decided to write about them with an eerie tone. Enjoy :)