What Happens When You Fall In Love With Your Best Friend

It was the same day as any other, but once I saw him everything changed. I couldn't explain it even if I tried, something was just different about him. Special.
He didn't look like the same old Drake that I've known since childhood. He looked . . . cute. He looked hot and sexy too, but the thoughts were too weird to process. His light blue eyes and smile sent glorious shivers down my spine.
Was this what if felt like to be in love? Did I love Drake? My best friend? The person I shared everything with? What if I did and I told him but he didn't like me back? Would we still remain friends? But what of he did love me? Would he tell me? Would he feel just as scared about it as I did now?

"Hello, are you in there?" Drake said, waving his hand in front of my face.

I blinked and shook my head.

"You've been dazing off like that for days now. Is something wrong?" He asked.

"No, nothings wrong. I just haven't been getting a lot of sleep lately," I lied.

The rest of the school day involved me drawing and thinking about Drake. What was I going to do? It's been a week now since I found out about my true feelings. How could I go up to him and say "Hey I'm in love with you"?
I cringed. There was no way I was going to tell him like that! The bell rang for lunch and my stomach sank. I was going to see him. We were going to sit next to each other at a cafeteria table, alone. Could I tell him now? I shook my head. Not in the school's cafeteria. After school, as we walk home. Butterflies swarmed around in my stomach at the frightening thought.
I was going to tell him after school.

"What are you going to do after school?" Drake asked as he took a giant bite out of his hamburger.

Panic coursed through my veins when he said the words "after school." I was scared and unsure of how to tell him my feelings. Would I even be able to tell him?


When the last bell of the day rang my heart stopped beating and my stomach hurt with nervousness. I bit my lip and gathered my things to meet Drake in front of the school. I still had no idea how I was going to tell him. And I had no idea what his reaction was going to be. Would he laugh? Would he dismiss me? Would we still be friends after the whole thing is done and over with, out in the open? My hands shook as I walked down the front steps of the school. My heart shored once I saw his figure leaning against a tree. He looked cool and calm. The total opposite of me.
I smiled brightly when I made it over to him. He smiled back and my heart skipped a beat. We walked in silence until I sucked in a deep shaky, nervous breath and said three words.

Drake stopped in his tracks and I stared down at the sidewalk, waiting for him to laugh. But when he didn't I looked up. Drake was staring up at the sky. And I noticed that his eyes and the sky were the same shade.

"I love you too," he whispered.

Drake looked back down at me. We stared into each others eyes until Drake pulled me into him and kissed me. Long and deep. Gentle and sweet.
That kiss meant something that day.
A few years later we got married and later on we had kids.
That day that kiss meant forever. 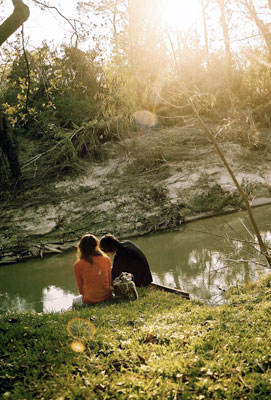 View profile
I loved it to bits! I know everyones saying it was rushed at the end, but honestly, if you don't include this line "A few years later we got married and later on we had kids.", then its perfectly fine. I really enjoyed this piece, and how she had the confidence to tell Drake was really quite inspiring and spir of the moment. Brilliant job!
ginger1993 GOLD said...
on Jan. 20 2012 at 1:07 pm
ginger1993 GOLD, Colorado Springs, Colorado
11 articles 0 photos 27 comments
View profile
I love your style of writing!! kept it up!! :)
BadGirl GOLD said...
on Jan. 6 2012 at 6:47 am
BadGirl GOLD, Dacula, Georgia
13 articles 10 photos 56 comments

View profile
Very good description, I could feel what your character was going through. Like everyone has said, the end was rushed, but I did like the way you ended it! But other than that the beginning was fabulous and I'd love to read more!
musicluvr3 GOLD said...
on Jan. 4 2012 at 12:53 am
musicluvr3 GOLD, San Diego, California
11 articles 0 photos 22 comments

View profile
I agree with most of these, the story was rly good and relatable until the end. I think yu rly rushed the end, the story was pod pace, bc even if it was a little rushed, it kinda shows that she's thinking about him do much the day rushes by... idk. I didn't like the ending as much as the rest... but it was still rly awesome (:
iatwinss SILVER said...
on Jan. 2 2012 at 6:26 pm
iatwinss SILVER, Wheatland, Iowa
7 articles 1 photo 8 comments
View profile
It's still a really good story. So keep it up! :)
BadGirl GOLD said...
on Jan. 2 2012 at 5:29 pm
BadGirl GOLD, Dacula, Georgia
13 articles 10 photos 56 comments

View profile
Thanks I know that now, every time I look at it I realize I show ld have done something different :)
iatwinss SILVER said...
on Jan. 2 2012 at 3:24 pm
iatwinss SILVER, Wheatland, Iowa
7 articles 1 photo 8 comments
View profile
I really liked this. I think it would have been better if you had put a bigger pause before he answered. Or maybe have him describe something or explain his thinking before he admits his love. It's always a good idea to add a little bit of the guy's point of view/thinking when the story is centered around the girl.
emmernemmer PLATINUM said...
on Dec. 30 2011 at 8:57 pm
emmernemmer PLATINUM, Stockton, California
25 articles 0 photos 17 comments

Favorite Quote:
"the pen is mightier than the sword"

View profile
I really like it and other than the '"' stuff I would only make the ending a little more suspenseful. Add some more dialogue and it will be perfect!
BadGirl GOLD said...
on Dec. 29 2011 at 4:32 pm
BadGirl GOLD, Dacula, Georgia
13 articles 10 photos 56 comments

Favorite Quote:
"Girls are so queer you never know what they mean. They say No when they mean Yes, and drive a man out of his wits for the fun of it." "Violence is never the answer! It is a question, and the answer is yes."

View profile
i loved this. It was slightly rushed at the end. Like if you took a little bit more time with dialogue leading up to when she told him she loved him. But overall great job :) love the imagery
tweetiebruce PLATINUM said...
on Dec. 29 2011 at 4:29 am
tweetiebruce PLATINUM, Sydney, Other
24 articles 0 photos 29 comments

Favorite Quote:
Life is like music - You can make mistakes so you try again. But when the piece can't be helped you try again another time.

View profile
At the end, it kinda rushes everything to much. It was good and worked well, but at the end it kind of just got cut short and its not a good final lines...