How Do You Tell Someone You're Leaving...Forever? | Teen Ink

How Do You Tell Someone You're Leaving...Forever?

How do you tell someone you're leaving, forever? How do you simply tell someone everything you feel about them? How do you let down all your guards, knowing you're going to be hurt no matter what you do? What can you say, when goodbye isn't enough?
I looked up to see him staring at me, he's mad, I can tell. I wonder how I'm going to tell him, when I'm going to tell him. His mind is probably wondering from subject to subject, momentarily stopping at me, but moving on along with his gaze. But not me, he's been on my mind every second since I found out that I was leaving. The first thing I thought of was never getting to be with him, I wanted him so badly. I waited months, holding out hope that someday he would realize I was the one for him, but now I know that will never happen. Then, I thought of the way he walked, and how that was the first thing I noticed about him, well, that and his smile. His smile…how do you describe something too perfect for words? His smile has haunted me from the first time I saw it, the way his eyes lit up, and when he laughed I got butterflies. I've tried every day since I met him to make him smile, because when he smiles nothing is ever that bad. Next I thought about telling him, in person, or over text? I've run scenario after scenario in my head, but it's useless, I can't imagine what he'll say…So why try? Finally, I just think about him, everything about him. I try to remember every conversation we've ever had, I've never needed someone to much, how can I leave him? I'm scared for the day when he's gone from my life, I'm petrified just by the thought of living without him. I never gotten to hold him, or tell him he's the most perfect thing I've ever seen, or let him know that when he let me in, when I got to know the real him, he was everything I'd ever wanted. He wasn't prince charming, because even prince charming couldn't be so perfect. He will be in my heart forever, but I don't know how to tell him, or when.
I looked up again to see him looking at me. How do you tell someone you're leaving…forever? I was about to find out. 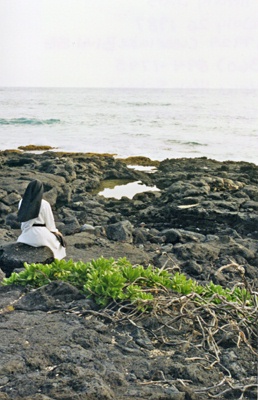 The author's comments:
This piece is about me trying to figure out how to say goodbye.
Post a comment
Submit your own