If You Really Knew Me | Teen Ink

If You Really Knew Me

If you really knew me, I wouldn’t be lying in the center of this feild, contemplating my mere exsistance, wavering the importance of my small speck of a life, I Wouldn’t be here at all, if you really knew me. You would’ve known that your help wouldn’t do anything except give me more of a reason to act the way I did, because if anyone is a horrible person, it’s me. And If you really knew me, that would be the only thought in your head, when seeing me at my worst.

You had no reason, no liability over me, You had no excuse to come into my life, but you did, and I hated that more than myself, at the time. The way that you were so sure of me, that my condescending stand point was only a disguise. That I only wanted everyone to think that I was above them, capable of taking care of myself. And we were both wrong about that asumption, and right at the same time. That no, I actually am not capable of handling myself, that I’m too weak to control my horrid emotions and I allow them to take the sane away from me. That in the end, I found that I was never hiding a rational being under my selfish disguise, that when you finally fought through my thick mask, there was only a girl ten times more selfish, and a hundred times more careless, waiting to chase away and ruin anyone willing to fall for me. And that anyone, was you.

“One does a whole painting for one peach and people think just the opposite—that that particular peach is but a detail” I remember those few words spoken to me at my worst, You quoted the words as if you were Picasso himself, and you told me that, to everyone else I may be just a detail, a speck on this planet, but to you, I was the most astonishing peach he’d ever held. And what did I respond with? I told you that you were full of crap. And you were. because if I’m a peach, than I’m a moldy one at that.

In a crime scene, evidence says it all, and all of this, is evidence, that you never really knew me, not at all. because if you really did know me, than you would have never risked your life before mine. Because as you drove through that light, only thinking of getting me to the hostpital in enough time to somehow save me from the many pills I shoved down my throat that night, If you had only thought of the horrible person I really am before saving me, you’d be fine right now. I’d be where I want to be, dead, and you, alive. Like it should be. That car would have never run into you from the side, splattering your blood accross the windshield, shattering your bones into millions of pieces. I remember turning my head, opening my eyes, seeing your limp body, cold and abandoned. Like the way I’ve felt my whole life, until you somehow forced yourself into it. Like the way I feel now, Lying in the center of this quiet feild. Looking at the sky. Wanting more than anything to have you here. So I could explain to you that you never really knew me. Because If you actually knew me, you would have given up on me like everyone else. 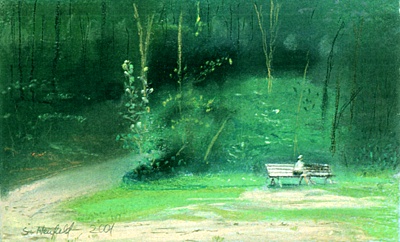 The author's comments:
I felt like writing in a different perspective than usual. I hope this is worth the time I spent on it(:
Post a comment
Submit your own

Favorite Quote:
"And the unspoken truth reverberates in the silence for eternity..."

Check out my stuff if u want. Please write more!!

I really appreciate it.

Favorite Quote:
Man performs and engenders so much more than he can or should have to bear. That's how he finds that he can bear anything. ~William Faulkner And "When life gives you Lemons ... you squeze them in someones eye!" yea i bet you just giggled a little

View profile
This was truly breathtaking. Beautiful and tragic and emotional.  The perspective was perfect. Amazing job.