“Geni, why would you do that?” Adele snipped. I had just told her about my plan. Her expression was a mix between exasperated and stressed. “I don’t know. What did you want me to do? Decline?”
“No, it would have made everyone’s lives a whole lot easier if you told him the truth.” I couldn’t help but think, maybe she was right. “Listen: I told Hugo I’d go to the mall with him. That allows you about two hours. Only two hours. Then, back here, understand?”
“Yeah. How are we going to make this work?”
“Don’t worry! And be back in two hours!”

At the mall, Hugo looked at me, and said, “I have to tell you something.” He looked concerned, and concentrated on my eyes.
“I’m all ears,” I jibed, encouragingly.
“About this morning…” Although, he was directly in front of me, gazing into my eyes, he seemed distant.
“Yes…Adele tried to explain it to me, but I’m confused.”
“Oh, well I’ll try to help you understand it.”
“Thanks.” He smiled, adoringly when I said that.
“Yup. Well, it was Celine’s family member that stabbed you. Celine denied it. And she said the reason that she did it was she was jealous of you.”
I felt dizzy, but I didn’t want to appear to him to be some damsel in distress that faints into his arms.
“Geni, you don’t look so good…Are you feeling alright?”
“I need to tell you something.”
“What?” He looked serious.
I swallowed, and breathed, “Well, Adele’s not really sick…I just…”
“Didn’t wanna go with me? Yeah, Genevieve I knew all about that.” I suddenly couldn’t decipher his expression. He never called me Genevieve; it was commonly Geni, but once in a while Gen. “No…I was nervous. Of course I wanted to go with you. And if you’re not mad, can you please still take me?”
“I don’t understand…Is something up?”
“I was nervous…But now I’m not.”
“I’d love to take you.” My heart fluttered, and I was pretty sure my lungs were singing. I knew somewhere deep inside, Hugo wouldn’t normally wait around for me like a senior anticipating senior prom.

When I got home, Adele was polishing her toenails diligently, and my mom was making some sort of soup. Even Celine was home, watching MTV, while eating butter-free popcorn. Ick, who could eat butter-free? As I made my way upstairs, to my room, Adele approached me. “So…? How’d it go?” She surveyed.
“Well, you certainly don’t have to play sick anymore! And he asked me!!!”
“Oh! My! God! Ahhh! I’m so excited! Aren’t you!!!”
“Of course! And why are you looking at me that way?” Adele was observing me from every angle, and it was getting annoying.
“You look…pale and flushed. Gen, you feeling okay?”
I was tired of that question. As I observed the familiar image in the mirror, I noted it was a bit flustered. I didn’t feel feverish, or dizzy. I just felt completely casual.
“Gen, you’re turning green!” Adele cried, worriedly.
“I’m not sick, relax! I’m perfectly fine now.”
As she held up a mirror, I was befuddled. I was turning into a mermaid rapidly! “Should I get your mother?”
“Adele, I don’t know…I’m scared!” Before I could ramble, she hurried down stairs. I felt normal because not much occurred when being morphed into half fish. The only difference was I felt dry and chafed all over my newly-scaly body. I was afraid, though because I was apparently not a full mermaid, yet. I was unsure of the circumstances that would change that.

“Everything’s fine, Hugo. I swear.” I reassured Hugo through the phone. He had just called me because of the encounter at the mall. I didn’t explain to Hugo the whole mermaid-thing because if I did, knowing him, he would certainly worry about me.
“You just looked pale, and the flu is going around.”
“Hugo, I’ve been through worse than the flu.”
“Is this about mermaids?” he murmured. I was busted. “Are you okay?”
Just then, my vision burst into a flurry of colors. My dizziness had returned, and I plummeted to the ground as I heard Hugo begging for me to answer. He wasn’t desperate. I could decode him enough to know that he was worried. This seemed like some perpetual nightmare that controlled me. And for an exquisite, mere moment, I actually pretended it was a nightmare, and I would wake up and have a fabulous life. But that didn’t mean it was true. In this case, following my dream of this being a nightmare would lead me to a cul-de-sac. A useless, little cul-de-sac.
The ground was more comfortable than standing up because at least now, fainting was the least of my worries. Ironic, don’t you think? I only could rack up the wandering thoughts in my mind, and finally, just think. No one needed me, well most likely they just weren’t capable of spirit-talking, since I considered myself technically unconscious. At least that was my physical state, but mentally, I was all there.
I stared vacantly at the lifeless ceiling. No personality, no uber colors, just plain. Normal, just like I would forever remain. I would never have extraordinary, piercing blue eyes, like Celine Aimable, or luscious flowing blonde hair as fabulous as Celine’s, or even irresistible beauty that could be compared to hers. Even though I was a mermaid, I would always have lightless brown eyes, and hideous half-wavy-half-straight blonde hair. Well not hideous, I was just done with being average. Even Adele had exceptional, striking looks: voluminous, curly mocha hair, faded-mocha skin, deep green eyes. That’s what made me wonder why she would be friends with me. Adele’s lucidly not superficial, but still. She’s the best friend I could ever ask for. Now that tranquility filled my mind, I could finally sleep. Well, mind sleep, since I was technically already sleeping. 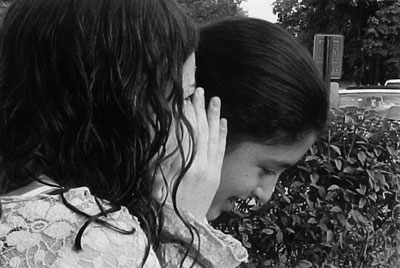