He would rest alone in the corner of the bar every night, with the exception of Christmas and Easter. His order was always a glass of absinthe.

“Please do not dilute.” He said when he arrived at the bar for the first time. And the bartender, amazed at his scholarly tone, refused to do so at first out of safety. But after the first several visits, he witnessed the man’s capacity in liquor and was left with no more doubt.

The bar was located in the center of a tiny town in the most remote part of the country. The bartender was surprised that the stranger understood absinthe, and could savor the delicacy behind its bitter exterior.

“Fée verte.” The bartender said as he handed the glass to him. “That’s what people used to call this, back in the 18th century.”

“La fée verte.” He corrected him. “Meaning ‘the green fairy’, in French.”

“Same thing.” He shrugged and turned back to his counter.

He attempted to continue, but noticing the bartender’s negligence he decided to stop.

Examining the glass bottle which he had left on the counter, he noticed the words “fée verte” on the wrapping.

One night there was a public festival during which most of the bar’s customers left town to celebrate in the woods on a hill behind the village. The bartender, forced to stay behind to mend the bar, approached the man’s table for a conversation in boredom.

It had rained in the afternoon that day, and the air smelled of rotten leaves and grass. He could hardly imagine the disaster which the celebration in the woods would turn into.

He did not answer. With all his effort in combating boredom, the bartender desperately continued the conversation.

“You know, most people could not bear the bitterness of absinthe without dilution.”

“Possibly they drink a different absinthe from mine.”

In the dim lights, he spoke for the first time.

He looked up, and in the pair of glimmering eyes under the brim of his top hat, the bartender saw a chill of emptiness, as if his pupils were merely plastic beads of no true value.

“I taste the flavor of time.” Words slowly uttered from his lips sounded like a trickling stream of freshly-melted ice water flowing in from afar.

“One night, my friend, an elfish woman dosed me with absinthe, without dilution. She led me into whimsical joy—what I dared not touch all these years, but I found it in her. Joy, the best of gifts, was granted to me by her presence...She was the la fée, my emerald of freedom!”

In the dim light, the bartender saw his face swollen as red as fire. “I...I think too much alcohol was bad for you, dear friend...”

“No!” His eyes suddenly flashed a glare of impulse, and he stared at him.

The bartender stepped back in fear as he pulled out a dagger from his pocket and pointed it right against his throat.

“I have shared my joy with you, and now I feel it leaking away from my body...you have taken it!”

He stood and thrust the bartender down in his chair at the corner, locking the bartender’s struggling arms against the wall. “But I want all, I want every single droplet of blood diluted with particles of my joy! I must have yours, like how I took it away from her!”

He stabbed the dagger into the bartender’s stomach, and fumbled it upwards, reaching for the bartender’s sternum from within his intestines. His entire arm was pushed into his ribs, and blood was bursting out from the crevice between his arm and the broken entrails, but he did not stop. Finally he reached in, and, with the tip of his dagger, hooked the heart out of the bartender’s body.

It was still somewhat beating as it was pulled out of its own components. The man, covered in streams of blood from head to toe, took the heart in his palms and carefully selected the aorta, and he sucked the artery into his own mouth.

He breathed out a sigh of relief as he tasted the delicacy of warm blood from the bartender’s heart.

That night, in the damp night air, he parted the bar alone. People were still celebrating, and the town was still empty. Moonlight lit up the pavement under her trudging feet, and he looked down to see puddles carved into the empty spaces among pebbles. The reflection of light deprived his eyes of all hues upon the pool of liquid, but he could almost make out the dark currents fluctuating under the calm surface.

And at that moment he saw something. Within the currents of the puddles, he seemed to have seen a reflection of himself, a dark silhouette gradually lighting up and transfiguring into the impression of a moon. He saw bits and pieces of himself, the tips of his hair, round shoulders, and thin fingers shivering in the brisk night wind as if he was torn apart by the pebbles which blockaded the flow of water to form a larger image.

His lips turned numb with awe and fear as he gradually took account of the enormity of this revelation.

He screamed into the damp night air, and heard only the empty sound his desperation, echoing back from the hills and woods. He threw himself to the ground, picked up the loose pebbles on the pavement, and banged his own head with their sharp and pointy ends.

Tears flowed out of his eyes and seemed to have washed his eyeballs along with his agony into a stream of bitterness, trickling its way down to the ground, into the darkness of puddles and swarms of mud.

He felt his skull breaking apart from the banging, as if an egg being cracked open before cooking, and his brain oozed out from the cracks of his skull. But there was no blood, no pain. He lay paralyzed on the pavement, his eyeballs rolling in the liquid juice of his brain, into the pools of swarming mud.

He fell, like an angel with broken wings, like a fairy banned from the land of the divine, and led himself back into nothingness. 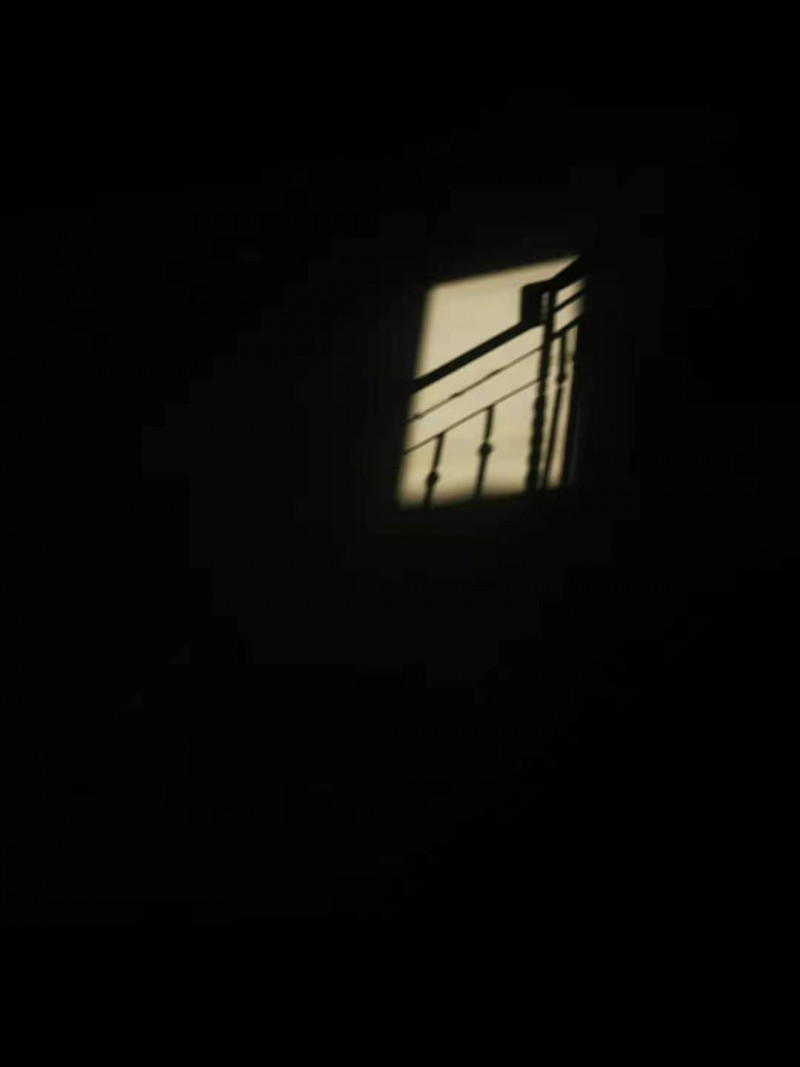