Favorite Quote:
"Everything stinks till it's finished," -Dr. Suess

Steven rose from his bed, lifting his flat, black comforter and dressed in another grey suit. When Steven began making his bed, however, he noticed the slightly more exciting striped side of his comforter, and made sure it was facing the mattress.

Steven fed his cat, named Garfield, and drank a cup of coffee over the business section of the newspaper. Garfield knocked over the coffee before Steven was finished with it, and he was lightly swatted with the newspaper.

Steven left his apartment and boarded the bus, where he read the editorial section of the newspaper.

Steven entered the office, where he was one in a sea of cubicles, clicking away at his keyboard seemingly in rhythm with all the other people clicking at their keyboards.

“Say, Steven, you find yourself a lady yet?” Steven’s boss, Stephen, appeared outside of Steven’s cubicle, peering in, wearing a tie brighter than everybody else’s, and with slicked back orange hair. He always stopped by to pick on Steven, much to Steven’s dismay.

“No, sir,” Steven answered with a sigh. Stephen asked him this question every day.


Steven missed the bus home, so he was inclined to walk. On his way home, he was blocked by a group of men in suits darker than his carrying a coffin in front of a crowd of weeping people. Steven crossed the street, avoiding them.

That night, after Steven paid some bills, he made lamb chops and green beans for dinner. He ate with a TV tray while watching the news, and gave Garfield a piece of the meat.

Steven lay in bed that night going over the events of the day. Nothing new, except that the water bill was unusually high. He thought of how Garfield spilled the coffee this morning, how much he resented Stephen, and how he had to walk home around that coffin.

His thoughts jumped to work where everybody else was just like him, clicking away. He thought how much Stephen stood out compared to everybody else. Sure, Steven begrudged him, but Stephen was unique.

Steven thought more about the coffin and the crowd of crying people; somebody had died. Would anybody cry for him if he died? Maybe Garfield, but Steven didn’t think cats could cry.

Steven couldn’t sleep, which was unusual, because he always slept well. The thoughts tumbled around in his head some more.

Finally, Steven rose from bed and strode to his closet. On the very top shelf behind some old college textbooks, was a saxophone. His parents gifted it to him in the fourth grade; Steven took lessons throughout his schooling but slowed down in favor of a business degree.

Steven stood in his living room holding a battered, dusty saxophone. He was unsure how he got here, or why his fingers were moving over the keys and the instrument was making noise, but he didn’t object to it. Garfield looked around the corner of the living room and mewed.

It wasn’t long before somebody banged on Steven’s door because it was twelve thirty in the morning. Steven put away the saxaphone for now.

Steven still couldn’t sleep. He went to the hall closet, where some cans of blue paint lay from Steven planning to repaint the kitchen. He opened the paint cans, dipped the brush into the paint, and stood facing the red kitchen wall. Steven whipped the paintbrush through the air so it splattered on the wall. Steven did it again. Eventually, the whole kitchen was splattered with blue paint, and Steven decided that it was good.

Garfield entered the kitchen and mewed. Steven looked at him for a second, and then painted Garfield’s back blue, contrasting with his orange fur. Garfield mewed again.

When Steven went back to bed, he flipped the comforter over, and slept soundly. 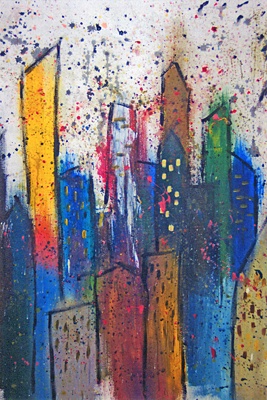 Favorite Quote:
"'Tis not in mortals to command success, but we'll do more, Sempronius- we'll deserve it."

View profile
I have to say that I really love stories with a lot of symbolism, and yours truly delivered! Your usage of color was great and the entire theme is so true for everyday life. I also thought that the Steven/Stephen contrast was really cool and kind of brilliant :) at times the story felt rushed and it was easy to skip important details, but that doesn't take much away from the fact that the story was fantastic and well-thought out. Some of your vocabulary could also be a little drab at times, but for this story it actually goes well with the drabness of Steven's life. I can't wait to read more of your work, keep it up!!
RobotPenn. SILVER said...
on Jun. 29 2015 at 8:53 pm
RobotPenn. SILVER, El Paso, Texas
8 articles 1 photo 81 comments

View profile
Wow! The use of color in this was beautiful. I love how everything was described in contrast to grey. The striped comforter, the slightly darker suits of the funeral procession, the orange hair. Every first impression you made was through color. I absolutely loved that. The ideas you had were great, but I'd love if you made your sentence structure slightly better. There were a few sentences, especially in the beginning, that I had to re-read to understand, or that I felt you could have made more descriptive or less run on. Other than that, it was freaking fantastic. Great job! I loved it. :)
Gwendolyn_ BRONZE said...
on Jun. 27 2015 at 2:55 pm
Gwendolyn_ BRONZE, Indianapolis, Indiana
1 article 0 photos 5 comments

Favorite Quote:
"Look what you have done. Listen! your brothers blood cries out to me from the ground!" -God

"Never let your schooling interfere with your education." -Mark Twain

View profile
This story's idea made me smile, I really like how it repeated, like to symbolize how everything was always the same everyday in Steven's life, if that makes sense.
Allen. PLATINUM said...
on Jun. 5 2015 at 1:26 pm
Allen. PLATINUM, Palo Alto, California
32 articles 9 photos 525 comments

Favorite Quote:
[i]No matter how much people try to put you down or make you think other things about yourself, the only person you can trust about who you really are is you[/i] -Crusher-P

View profile
I think you should work primarily on showing rather than telling here. As good as the storyline and characters are, there are scenes where you could explain the same thing by simply providing facts. For example, rather than saying the reason people knocked on his door, state the clock read half past twelve. The reader can make the connection themselves, and the effect will be subtler.
Beila BRONZE said...
on May. 19 2015 at 3:46 am
Beila BRONZE, Palo Alto, California
3 articles 0 photos 516 comments

View profile
It's an interesting idea, and I know the short, curt sentences are more your style, but to me, this story fell short in terms of keeping my attention. It felt too much like "And then I did this. And then I did that." I'm not saying that you have to drastically alter your voice, but I think this piece could have used some stronger verbs and more descriptions rather than just a rote recitation of routine. Even if it was intended to mirror the monotony of his life, you do still have to keep the reader reading after the first paragraph. ;)