Thomas’ routine continued as normal. Every day, at eight o’ clock, he partook in the same activity; jogging had always been a favorite of his. It kept Thomas healthy and lean. Most of all, time flew by like a peregrine falcon in a steep dive. So, at eight o’ clock, he set off from his apartment building for a nice little jogging session.

The town was still in its early stages of development; it was still in the phase where only local businesses existed. However, this suited Thomas perfectly. He enjoyed the small town atmosphere, and he relished the great amount of business his little shop had accumulated in such a short time. Things were bound to take off in Chestnutt, that was for sure.

Chestnutt, North Carolina. Perhaps one of many small towns in the state. The population was only 112 at that current point in time, though it was increasing at a more rapid pace with each passing day. All the kids were at school; the school house was a few miles out. That was the direction Thomas was taking.

He reached the school house in a little over twenty-two minutes. Thomas was generally a fast jogger, though he intentionally slowed down so he could take in the scenery. It was an elementary school, resplendent with red bricks that sent a wave of nostalgia over Thomas. Simpler days...

“Why can’t you come?” The shriek from Derek was enough to cause glass to shatter. Thomas winced. “Because adults don’t go to school, son.” Derek had not been growing more and more independent; in fact, the opposite seemed to be true. Derek had been one of the most independent toddlers that Thomas would think existed. Now, though, it was a different story.

“But you said that you learn too!” the small child protested. Thomas opened his mouth, then closed it. How in the world was he supposed to argue with that point? This is why Denise was more suited to take care of Derek; she always knew what to do. Then, an idea flashed through Thomas’ head. “Hey, Derek, I’ll go to another school. Okay? One for grown-ups.” He could go back to college for his Master’s, right? It couldn’t be too late for that. After all, a Master’s degree was preferable anyways, and it was affordable at this point in Thomas’ life.

Derek’s eyes lit up. “Really?” They had arrived at the school. Thomas nodded at him. “Absolutely.” Derek smiled brightly as he jumped up and down, pausing only to undo his seatbelt. “Thanks, Daddy.” They both got out of the car, Thomas taking Derek’s hand and leading him up to the doors. “Be good and do what the teacher says.” This wasn’t a command from Thomas but a statement from Derek. He had to be the smartest kid Thomas had ever met. Thomas nodded and hugged his son. “Have a good day, Derek.” Thomas felt a tear come to his eye. He got emotional at the worst possible times. “Be good.”

“I will, Daddy!” The boy ran into the building. Thomas started back towards the car. It was time to go back to college...

Derek was now in college to get his Master’s degree, though his was going to be in civil engineering. Thomas’ was in business. As he jogged past the school, he got an insane idea. He’d have to run it past Denise. With that thought, Thomas did a one-eighty and jogged all the way back to his place. When he got in the door, Denise was sitting there in a chair. “How was your run?” That was as routine as a question could be. Thomas never answered it.

“Denise, I want to adopt a child.” 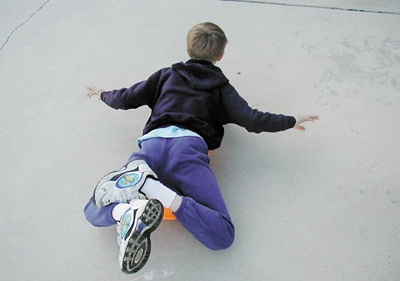 The author's comments:
This is a writing prompt that I did for English. I decided to upload it here. Read, rate, comment, and enjoy!
Post a comment
Submit your own