Just as I heard the “BBBRRRRINNNNNGGGG” of the late bell, I rushed into Mr. Smith’s study hall in room 613. I took my usual seat, second row, and second seat from the back of the room, right next to my best friend Jasmyne. Exhausted from running across the school I said gasping, “Phew! I thought I was gonna be late!” and she weakly smiled at me showing her red and green colored braces. I knew immediately that something was wrong. It was Henry again. Henry is Jasmyne’s ex-boyfriend who should legally be considered a pig’s rear end. He is one of the world’s biggest jerks, that is, according to me, and my other best friend, Rachelle. “Karen...” she whined to me. “ What am I going to do? I don’t know what I want anymore…I just…I don’t know. I want him back.” I reached over and gave her a much needed hug just as Rachelle walked in and instantly knew what was wrong. Rachelle has a magical way of understanding peoples’ hearts.

“Sorry! Sorry! I was finishing up Hannigan’s Chem test!” she said in her smooth soft voice as she stumbled to her desk, directly behind Jasmyne. One look from the two of us and she was completely caught up. “Oh Jazz!” she exclaimed and wrapped Jasmyne in a hug, just as I had done. “What about Will? Jazz, you can’t be with Will AND Henry… you need to figure out which one you love more…” she quietly pointed out as she sat back in her chair. Will is the sweetest guy ever! He and Jasmyne have been friends since they were little kids. She is the only one who can even begin to understand his tragic life. Clearly flustered, Jasmyne stuttered, “Yeah… I know…but I just…I want Henry more than anything…I want him to love me again….I wish I had never broken up with him…”

“No! Jazz! Henry is a total blockhead! He hurt you more than anybody ever before! Why, oh why could you ever want to be with HIM?! Of all people!?” I quickly exclaimed, before I could stop myself. The shocked faces on not only my two friends, but also on Mr. Smith, and the rest of the class made me slide down silently in my chair. “Sorry,” I whispered, just before the three of us burst into hysterical laughter. When I finally caught my breath, I tried again. “Seriously, though, Jazz. Will is a great guy! He is sweet, and nice, and a fantastic friend, and he won’t pressure you to have sex with him and he really, really, really loves you! And he is a TOTAL BABE!” I said happily. “I love him too, but I just…I want to be with somebody…but I don’t want to lose another friend…especially not Will” she responded softly.
Rachelle smiled widely and her perfectly white teeth sparkled from the light overhead. Both Jasmyne and I looked at her patiently waiting for her opinion on it all. “Well,” she began, “I think you should go out with Will. We already know him, and I don’t think he could ever hurt you, Jazz. He is just too sweet, to do what Henry did. And who knows, you two might work out. And, you will always be loved honey.” She smiled again at the two of us, and I cried out “Awwwwww!” then I reached over to my two best friends in the whole world, and gave them huge hugs. “Friends Forever,” we all whispered quietly to each other, “Sisters for Life.” 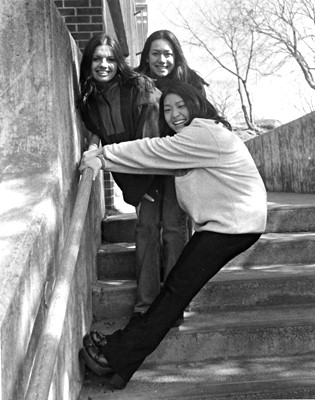 Nice! I really liked it... the story flowed well and was easy to understand... The only thing I would say is that you  need to put the dialouge on seperate lines..