'It is alarming because no household is untouched. But it is the greed of the pastors, driving around in Mercedes, that makes them choose the vulnerable.'


My name is Magrose. I am just seven years old.
And I am a witch.
The rainy season is over, I think. There’s no more rain to wash away the blood over my arms. In Nigeria, we children are the object of a brutal witch hunt.
We have many pastors in our town. They take these things called “deliverances” from my parents. And every time my parents give away, I think they hate me a little more. Here, for people to be convicted of witchcraft, something from divorce, disease, accidents or job losses happens to you.
At first it was these “deliverances,” but no more. Now it is us children. They say we are witches. The village has turned on us. I heard my daddy say he’s scared. Scared of what? I asked. My daddy looked at me, spat on the ground, “get out witch’ he said and I scrambled into my room and hid. I don’t know what a witch is, but they say I am one, after my parents divorced.
Now it is not safe to go outside. They will attack you. They will hurt you. Kill you. I don’t leave to the market anymore. I don’t go play with the other children, the other witches. We are all afraid.
Down on Esit Eket, is where my friends are. They are there because they are outcasts, and that’s where the witching children go. The Pastors come round and monitor them. Sometimes he’ll grab you and take you away for cleanising. An “exorcism” they call it.
But I heard Mister Sam Ikpe-Itauma is taking in children there. I went to him, but he’s real crowded now, and the towns’ people ain’t happy with him for taking in witching children. But Mister Sam is real nice and he let me stay with him.
I am scared for Mister Sam Ikpe-Itauma. I know he just cares for us, and he wants us to be safe, away from the Pastors. Away from our parents, who hate us. Mister Sam’s wife, Elizabeth, is a beautiful lady with rich, chocolate skin and bright white milk splashing around her pupils. She helps the children who the Pastors and towns people have gotten too; children who been burned and hurt by those they trusted..
I know there are good people trying’ to help us witching’ children. They’re somewhere up the road, but nobody has saved us so far except Mister and Miss Ikpe-Itauma, but I don’t know how long that will last.
Mary told me because her brother died, the Pastors came after her and told her she was a witch. She is ostracized now. Other things happened to her, but she only told the white people who have notebooks and pencils and clean faces. She was crying when she was finished talking.
Then there is the Prophetess. Everyone is scared of her. She will pick you out of nowhere and turn you into a witching’ child. That’s what happened to Gerry. He doesn’t like to talk about it though, but I hear everywhere he asks for his parents, who don’t want anything to do with him after he was picked out by the Prophetess.
Nwaeka and Etido got hurt real bad. They can’t talk right anymore. We love them though, us other children, we try to make them feel like they alright, like they loved. I think Nwaeka is dying’ though…she won’t eat any more. She’s so thin and all she does day and night is sit in the mud with her eyes rolling’ back and forth, back and forth.
Udo was beaten by villagers after he strayed off from his abusive mother. I try not to stare at Udo, his wounds scare me and I am afraid the villagers will come after me. Michael will not speak. I have never heard him say a word, and poor, poor Ekemini cannot walk anymore.
I have heard about Prince and Rita. One, Prince had a dream, which automatically makes you a witch and they were both abandoned. Victoria and Helen were also left behind. Helen is my age and I really like her. We are good friends, Helen and I.
I tell the white people with the notebooks that my mother tried to bury me alive. She said I was a witch. I escaped though. I haven’t seen my mother since. I think I hear her sometimes. But she is never there and my nightmares don’t leave.
I hear Mister Sam tell the white people, “'The more children the pastor declares witches, the more famous he gets and the more money he can make. The parents are asked for so much money that they will pay in installments or perhaps sell their property. This is not what churches should be doing.'”
I don’t know what that means, but Mister Sam sounds so disgusted I don’t ask and I scratch at my dirty arms. The Pastors says that us witching’ children put a spell on our mothers and give them Breast Cancer. They say we give them AIDS.
The white people are going to a congregation tonight, but I am not coming. I am too scared to be near the Pastors and the Prophetess. Or maybe my parents will be there. But no, I stay with Mister Sam and Elizabeth.
It is night now, and there are one-hundred thirty- three of us in this chicken coop on Esit Eket. We are the witching children. We are discriminated, ostracized, abandoned, but we stand together as one, and one day we will no longer be witches, but real children, who run and play and laugh; children who are loved. 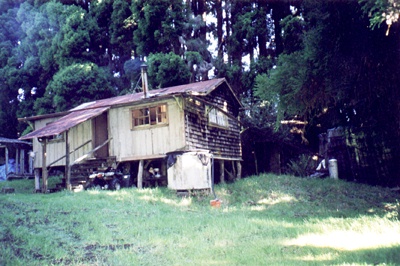 The author's comments:
A true story I stumbled upon while researching discrimination. God bless all those innocent children in Nigeria.
Post a comment
Submit your own