Glitter From The Sky | Teen Ink

Glitter From The Sky

Every eye lit up, as if they were all children, seeing the tree on Christmas morning for the first time. Giggles escaped from every throat, including the adults. It was shockingly beautiful.

It was an inconvenience to so many. So many had such detest for it, but not the people of this town. Everyone was out in the streets, baffled. The grown and the children were indecipherable. They were all one and the same, never seeing such a scene in their lives.

It was a fairy tale, something right out of the books. Some wondered, as they pulled their robes over their pajamas, if they were still sleeping. It was a gift from God.

They touched it, memorizing the feeling. Cameras flashed as they twirled in it, forgetting every bad thing for a moment and just being there.

Strangers hugged. Children grabbed hands and laid down in it. Parents rushed inside hastily to pull out water tubes and boogie boards.

It looked like a painting for just a moment. Steaming cups were held in hands protected with makeshift gloves.

The sun shone on it, making the ground sparkle. It kept coming, the glitter from the sky.
They had only known what to do with it from television, so they began trying to shape it, trying to roll it. They tried to slip down it, screaming with excitement.

The next day, it’d be gone. There was hardly any now, but the mere sight of something so rare and exciting brought them all together. The old woman with the yellow door, the single mother with three kids, the lawyer who lived alone on the corner, they were all friends now, because of this. Because of this miracle God had given this small, Florida town.

The simple, but largely taken for granted, gift of snow. 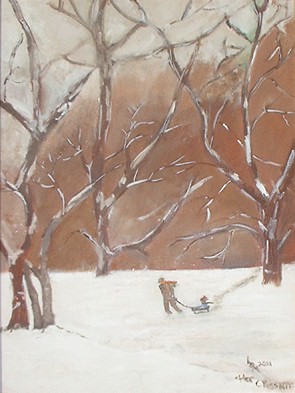 Favorite Quote:
" No one can told you back besides yourself " MaKayla Claymore class of 2013