“Now then,” the police officer said as he tapped his desk with a ball point pen and stared at the young boy who sat in the interrogation seat. “Tell me exactly where were you last night at eleven o’clock.” The boy hung his head. His brown curls fell over his eyes. He sighed heavily.

“I was at school.”
The officer raised his eye brows. “At that time of night?”
The boy nodded.
“Tell me, Jay Stephen Carpenter, what you were doing at school.”
Jay pictured what had happened last night before a simple prank had become a huge scandal.

I peddle down the dark street with three of my buddies. It’s late, but it has to be dark for our plan to work. If it was day, we would be caught and get detention or something like that. We could even be expelled. But no one will ever know that it was us, the straight A nerds who play with a calculator instead of an X-box. Sure, we think we’re cool, but no one else does, and we’re on our way to proving that we can be bad as well. But we have to be careful. Four thirteen year-olds biking to their junior high in the dead of night isn’t the most normal thing to see in this small town.

Ronny, our gang leader as I now like to call him, tosses each of us, Kevin, Don, and me a plastic bag. Each bag contains: A can of spray paint, chalk, a flash light, and whoopee cushions. These are our tools to complete our mission.

We’re behind the school building, right underneath the bathroom window. Ronny goes over the plan with us even though we all know it by heart. I grow more and more nervous about this. What if we do get caught? I don’t mention my worries to Ronny because it will make me look like a looser and a chicken. But I can see in his eyes that he has doubts as well. We’ve never done, or wanted to do, anything like this before. This isn’t like geometry; this requires thinking and precautions. And it’s hard. Not the actions, but all the guilt. We are, or used to be, good kids. What would our parents or teachers think if they knew what we are doing?

Ronny boosts Kevin up through the open window first. Next is me. I put my foot into his laced hands and hold onto the window sill as he lifts me up. I swing my legs over the sill and am now squeezing through the narrow opening. I feel myself falling. My feet hit the floor. It’s dark, so I search my bag for the flash light. After turning it on I see Kevin next to me. His sudden appearance makes me jump.

“Calm down, grasshopper,” He says. “Afraid of the dark, are we?”
I don’t answer.
He continues. “Don is going to stay out there to keep watch, but Ronny said to start without him. The dark won’t last forever.”
I shrug off these new orders. It doesn’t surprise me. Ronny is known to change his mind about something at the last minute.

We make our way to the door and it takes a few minutes for him to pick the lock, but soon we are out in the familiar hallway, now so foreign and mysterious in the dark. We immediately go our separate ways and find the stations we agreed on working. I find myself outside our home room. This room, the one next door, and the two hallways leading to the 6th – 7th grade classrooms are where I’ll be for the next few hours.

I am finally finished with our home room. I had kept this room for last. I look at my work with approving eyes. There are whoopee cushions on the chairs of the kids who have been or are bullies when it comes to us being smarter than them. I even placed one on our ogre of a teacher’s chair. The art work on the black board portrays a funny yet gruesome illustration of kids being eaten by the ogre. The floor near the black board and the class essays that hang on the wall next to it are all splattered with red paint to give everything a bloody affect. I turn from the room to continue my work in the hallways.

I feel almost cool, but stupid too. My handy work seems babyish compared to the vandalism some high school guys did to a different school a year ago. I have to remind myself that we’re not here to get thrown in jail, just to prove a point. But what point am I proving if no one ever knows it was us?

My steps echo on the ceramic floors as I walk down the hallway. I spray the walls and lockers with blue paint. It’s nothing spectacular. Just swirls and squiggles. Just so that people can see that they’re there. My flash light catches something moving near the girl’s bathroom. It’s Kevin. He’s pushing a skeleton through the bathroom door. He grins at me and disappears into the bathroom. I follow him with my flash light and see him pushing it into a stall. Someone is going to have the fright of their life tomorrow during second period break. We’ll probably all die from trying not to laugh when a piercing screech reaches everyone’s ears.

I’m taking my time making my art on the lockers actually look cool, when the sound of running feet approaches me. I hear someone swear under their breath and a loud siren blasts my ears out. Ronny’s next to me now; he’s leaning against the wet paint. He’s breathing hard and trying to say something.

“God, Ronny, what did you do?”
He doesn’t even have to tell me, I already know that he set off the school’s alarm system. He catches his breath.

“We gotta get out of here!”
He grabs up my bag and stuffs it into an open locker. “There’s no way the police are gonna ignore this!”
He takes my flash light and starts running down the hall without me. I stand there dumbfounded. This wasn’t supposed to happen. He had assured all of us over and over again that nothing like this was going to happen. I realize that he has my light and am quick to follow. I guess that this proves that knowledge doesn’t always make you smart.
I sprint down the hall and Ronny’s hand shoots out from around a corner and pulls me back into the shadows.

“Shshs! Do you want us to get caught? They’re in the building!” his voice is desperate.

“Come on!”
He pulls me down another hallway, now without a light.

We’re running again. But this time we’re being chased. They have huge lights and there are a lot of them. They’re everywhere. My heart is pumping twenty times its normal pace. I’m scared.

12:57 a.m.
We run into Kevin near our home room. He sees our desperate faces in the beam of his light and hears the sirens and police coming after us. He joins in the race.
We’re almost to the bathroom door when they catch us. They shine their lights in our eyes. I’m trembling so hard that I wet my pants. My stomach is in my mouth. Ronny and Kevin look afraid as well.

The seat is hard. The car is moving quickly down the road. I hang my head in hopeless shame. They’ve called all of our parents; they’ll meet us at the police station.

Don sits next to me. They found him right after they got us. It’s dooms day for us now. Ronny’s dad will be yelling at the top of his lungs. He might even hit Ronny. I know that my parents will hang in the background, too ashamed to even look at me in the eyes. We will get detention, or worse. We’ll be expelled, and grounded for a year. I cringe at the thought. We’re all going to die.

Ronny’s dad is yelling. His mom is crying. Ronny just hangs his head. Finally the police officer calms his dad down long enough for him to sign a release form. Ronny then leaves with his parents. I know that by tomorrow he’ll have a bunch of unexplained injuries and bruises.

Kevin, Don, and their parents eventually leave as well, until it’s only me, Mom, Dad, and the police. When we get home I expect silence; just silence. The worst punishment in the world. 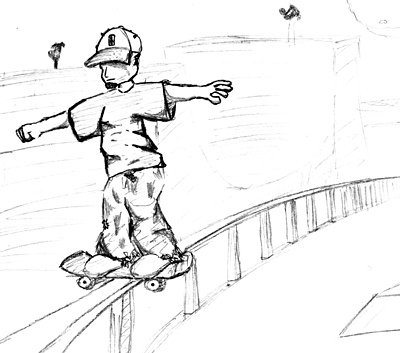 Favorite Quote:
Live each day as if it were your last.

View profile
WOW this story had me hooked from the beginning! Just the right amount of detail to which it didn't bore me and I knew what was going on without confusion . Please write more!
pinkypromise23 PLATINUM said...
on Oct. 23 2010 at 9:10 pm
pinkypromise23 PLATINUM, Cranston, Rhode Island
30 articles 0 photos 412 comments

Favorite Quote:
i know that you believe you understand what you think i said, but im not sure you realize that what you heard is not what i meant.

Favorite Quote:
i know that you believe you understand what you think i said, but im not sure you realize that what you heard is not what i meant.

View profile
sorry if im annoying commenting on all your stuff, but its sooooooooooooo good!!!! like, seriously god. i really like this one, i could feel what the narrator was feeling. never stop writing!
truthseeker said...
on Jul. 29 2010 at 12:15 am
Mollers, you are developing as a writer and I am so proud of you. I was with your young Sam-boy the whole time. It was like I was in his middle-school...with clayton and daniel and tyler and sam. Awesome.
JustKeepRowin SILVER said...
on Jun. 22 2010 at 11:03 am
JustKeepRowin SILVER, Pittsburgh, Pennsylvania
5 articles 0 photos 69 comments

View profile
thanks for the comment! im glad you liked it. :D yes, i agree about what you said. im still getting used to the whole idea of showing rather than explaining. there are so many stories i have dropped because of that.
lildutchgurl BRONZE said...
on Jun. 8 2010 at 7:22 pm
lildutchgurl BRONZE, Hillsborough, California
3 articles 2 photos 58 comments
View profile
really intense story! i loved it, but i think you do a little too much telling teh 11:45 paragraph rather than showing. GREAT JOB!