"5 Steps to a New Self-Confident You" | Teen Ink

"5 Steps to a New Self-Confident You"

I’ve been reading a magazine lately, one that will supposedly aid in enhancing my self-confidence. You see, I’ve never been a really outgoing person, nor have I ever wanted to. Until I met Susan, that is. Susan is the editor of a respected newspaper company and one can easily say that she is an outgoing person with a ton of self-confidence. She has to be, of course, she’s a businesswoman. Then again, so am I.
The magazine is called the 5 Steps to A New Self-Confident You and ironically, contains only five pages. Excluding the introduction which is located right after the front cover; the foreword states to complete each step before turning to the next page, and the next step. The only way to fully grasp the understanding of each step, one must finish each step thoroughly and cautiously. I took a deep breath before starting with step one.

Step One: How to Dress
A stylish dress code is the first necessity to be established in order to improve your new and improved image. Yes, that means throw out the baggy jeans, the hoodies and sweaters, the unsightly running shoes and hit the shops. And by “hit,” I mean scavenge, hurry, and put the hustle in bustle. Immediately. Macy’s, Prada, Gucci. Expensive brand names are the best.

After raiding various stores of their Louis Vuitton handbags, their expensive shoes, wallets, fashionable accessories and clothing, I returned home with over ten shopping bags. My old clothes and accessories were stashed somewhere underneath the piles of junk in my closet. I would gladly hand those over to the garbage collector when he returned to pick up the trash tomorrow morning. I flipped the page.

Step Two: How to Speak
Formal tone can be such a drag, especially when many people can easily get away with speaking informally. In other words, “preppy” is in; last year it was “gangsta” but, obviously, that was SO last year! Be sure to add “like” and “so what?” and “whatever” and “totally” into your daily language; it would be best to include at least one phrase after each sentence uttered. Combining them, for example: “like, whatever,” is a bonus.

I took a day off work today, practising my new way of speaking. I did exactly as the magazine instructed; by the end of the day, I had probably used “like” over hundred times. The next day, I proudly progressed to step three.

Step Three: How to Act
Acting is probably the most significant aspect of your new image. Nobody likes a b**** or a whiner, for that matter, which is why acting as sweetly as possible is your goal. Remember what Lady Macbeth said? "Look like the innocent flower, but be the serpent under 't." Manipulation is key on the road to success. Act like the Good Samaritan, and then go for the kill. False images are valued more than originality, after all. Even if nobody wishes to admit it.

This part of the magazine surprised me at first. But, it was a published article was it not? It had to be valid. Coincidentally, my neighbour spoke to me today. I hadn’t spoken to him for months, especially not after he had “accidentally” crashed into my convertible the other day, with his totally not cool Honda Civic. But, like, whatever right? Being the Good Samaritan I was and still am, I forgave the fool with a pleasant and cold smile. Nevertheless, he still had the nerve to knock on my door and ask for a cup of sugar.

“Like, what do you want?” I asked coolly, calmly.

“If it isn’t too much to ask, a cup of sugar,” he replied and then, as an afterthought, “please.”

I smiled grimly, “Whatever.” Then I retrieved his cup of sugar. And that was that. Step three was complete. I waited for the weekend, the following Saturday, before starting the next stage.

Step Four:
Congratulations! You’ve succeeded in perking up your appearance, voice and act! Now, why don’t you put all three together and take a look in the mirror?

I scanned the page for more instructions. But, those were the only words. I shrugged, whatever, and threw on a brand name outfit, and walked elegantly towards the large mirror behind my bedroom door. My eyes widened in alarm, and I gasped. Standing before me was not my reflection, but Susan’s. Platinum blonde hair, a fashionable wardrobe; even the way I stood depicted a rash arrogance, a haughty egotism. This was not confidence. This was superficiality.

Stunned and disoriented, I returned to the magazine hoping and praying that whatever came next would solve my dilemma.

Step Five:
I can assume at this point that you’ve seen your reflection. Well, this was what you wanted right? Like, to be totally glamorous, right? Congratulations; you’ve become one of the crowd.

I quickly flipped to the next page, it was an empty back cover. Well, this was what you wanted right? Was it? I kicked off my black high heels. Was it really? You’ve become one of the crowd.

I scampered to my closet, tossing out all of the glitzy apparels I had ludicrously purchased. I chucked the Prada jacket I was wearing onto the pile of junk, replacing it with a cheap green sweater I had received for my birthday. I shoved on a pair of faded blue jeans, and socks. The clothes welcomed my body as if it were long lost relatives. Relief swept over my conscious; I felt secure. I felt warm. But, most importantly, I felt like myself.

Monday was when I saw Susan again, yet this time I saw her for who she really was. The alterations she had undergone to enhance her physical appearance became more apparent, the amount of cosmetics used to hide dimples and blemishes visually evident. I glanced down at my sweater and jeans, and laughed. Susan asked me what was wrong, and I smiled, shook my head, and returned to my work. 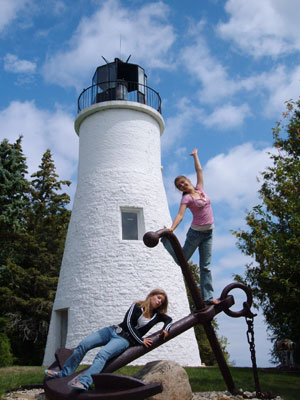 The author's comments:
:) I thought that this was an interesting topic -- and I wanted this story to depict how ridiculous it is when people try to be "perfect."
Post a comment
Submit your own