“You’re commin’ back, Addi-lynn? Right? You’re commin’ back?” Tears flowed down his face despite his manly effort not to cry. After all, big boys didn’t cry. “I don’t know, TJ” her words were a rough whisper that would carry her away. He reached out and pulled her close, but Addi-Lynn pushed him back. “Don’t worry ‘bout me; I’m a big girl.” TJ shook his head and swiped a dirty hand across his streaming eyes. With shaking fingers, he handed her a small cardboard box. She smiled for the first time since she found out that moving meant she wouldn’t see TJ every day; to her six-year-old mind, moving was an adventure, and TJ got to come on all her adventures. But not this one, not this time. Her mother scooped her up and belted her into her booster seat. As the faded red minivan pulled away from Addi-lynn’s world, she opened the little box in her lap. A child’s necklace was sitting on a tiny cotton puff; the bright yellow enamel charm was in the shape of a sun.


The cheerful bing of his computer provided the much needed distraction from Thomas’s math homework. He shoved the book to the floor and pulled the laptop closer, opening instant messenger and checking who was online. At the top of the short list was Adrian

Thomas: what time r u leaving?


The fact that she had said yes was nothing compared to the shock of realizing that he would get to see Adrian again after twelve years. She wasn’t going to be the same kid who split cookies with him in a fort made of sheets in the living room, he knew that much. They had e-mailed and IM’d since she left, so he never really lost her. And now she was coming back. Thomas looked at the only picture he had of her and laughed quietly; Adrian and him were sitting side by side and giving each other bunny ears in the backseat of his moms’ station wagon as they got ready for their annual trip to the lake. Those trips had stopped the year after she’d moved. They’d been in first grade then, and now high school graduation was only a few weeks away

Adrian smiled, as she checked he bags one last time and fished her key out of the bowl by the door. The sun was setting the horizon on fire as she kissed her mom goodbye and headed out for the interstate. Eight hours of travel lay ahead of her, and rush hour had only just started. Adrian reached up and fingered the tiny enamel sun that hung around her neck; the paint had chipped in places, and the chain had long since broken. She had restrung it, though, and kept wearing it.

It was nearing two in the afternoon when the flaming red motorcycle pulled into his driveway; Thomas leapt to his feet and stared as the driver unwrapped her impossibly long limbs from the streamlined bike. With three strides, the rider had crossed to him and swept Thomas into a strangling hold. He shoved back with all his might, but she just stepped away with her head tilted to the side in confusion. She turned and walked back to her bike. Once there, the rider tugged her gloves and red jacket off and folded them over the seat, and, with some difficulty, pulled the helmet from her head.

She turned to face him, her expression guarded. Thomas met her light grey eyes with his dark ones. He walked to her with agonizing slowness, and when he reached her his hand went to the charm around her neck. “Addi-Lynn?” her face broke into a smile from the not-so-distant past. Adrian laughed “You were the only one who ever called me that” he nodded as if to say he remembered. Thomas wanted to say something, anything, but his mind was as blank as his unfinished math homework. “uh, well, you used to call me TJ…” his sentence trailed away into oblivion. She nodded and hugged him again. “You came back, back home” he whispered into her hair.

Adrian pulled back and went back to her motorcycle and swept her bag and gear into her arms and walked back over to him. The silence stretched, and in a last-ditch attempt to break it, Thomas asked the one question that came to mind; “What’s with the bike?” Adrian shot her devil-may-care grin and just laughed. Knowing he wouldn’t get an answer, he laughed too. Just like old times. 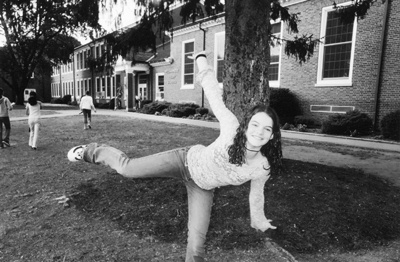 The author's comments:
People change over time, but some things stay the same.
Post a comment
Submit your own