A pair of silvery gray eyes. A summer spent at the lake. The sound of her name being spoken softly. All of these floated across Makenzie’s mind like a bizarre PowerPoint presentation. Her hand traced curlicues over the sketchbook hidden beneath a façade of several pages of notes seemingly of its own accord. The dark chocolate of her eyes glittered as she wandered through a collection of images both in memory and fantasy. The classroom was silent except for the endless droning of a balding middle-aged man as he waxed on about solving equations.

The three sharp, high pitched tones of the bell startled Makenzie to the point she almost fell out of her chair and managed to spill her books and poorly concealed sketch pad to the floor. Above the noises of chairs being shoved away from desks and the chatter of teens preparing to go to lunch no one heard her curse quietly to herself as she swept the loose pages into some semblance of order. Makenzie sighed as she began pulling herself to her feet, gripping the edge of the desk for support.

“These are really good.” She jumped once again, almost dropping the papers she was clutching. Standing before her was the quiet kid from the back of class, the one with gray eyes and several pages of sheet music always at hand. He was slowly turning the leaves of her book, his eyes taking in the images before him. “Th-thank you, can I have it back?” he smiled and passed it back to her “I’m Aaron” Makenzie felt herself color up to her forehead and dropped her gaze. “Max.” Aaron reached down and pulled her to her feet “Max? Interesting name.” She raised her eyes to him, and they sparkled with irritation “Yeah, got a problem with that?” he raised his hands in surrender “chill, all I said was interesting.” He paused, then continued “so, Max, is that short for something?” She shot him a withering look, then turned toward the door and headed for the hallway and lunch.

“Hey, wait up! Look, I’m sorry about the name thing and—“ Makenzie stopped with her hand on the door knob and interrupted “Makenzie” Aaron came to a halt, his confusion was the dominant feature on his face. “My full name” she rolled her eyes as she spoke. Watching the comprehension dawn on him seemed funny to her and a small giggle escaped. They were out in the hall now, on their way to the commons when Aaron spoke again. “why Max, Makenzie? She spoke slowly, as if choosing her words with great care “Honestly? I don’t know; it just bothers me.” He nodded silently and she continued as if he hadn’t moved “Makenzie just never seemed to fit me, Max did. End of story.” Aaron grinned “Well, Makenzie is sort of a long name for someone so small” her eyes flashed dangerously as Makenzie drew herself up to her full four foot nine inches. Aaron smiled, his silver eyes gleaming as he raised his hands in mock surrender again “Makenzie, Makenzie chill. I’m just kidding, I was shorter than you until about sixth grade. Besides, I think you’re kinda cute.” Her jaw dropped as she turned to look him in the eye, her face redder than her converse. Her voice barely a squeak “o-o-o-okay”

The pair had reached Makenzie’s locker and as she turned to open the door Aaron shrugged “hey, it’s the truth” she slammed the door shut with more force than necessary “So, Makenzie, what do you do for fun?” she sighed slowly and turned to face him, wondering if this was his idea of a joke “Cause I got gift card for the Paper Lantern on sixth street, you know, the Chinese buffet.” She felt her guard drop slightly as she stared at him; he had only just found out her name and now he wanted to go for dinner?! “Um, I’ll have to talk to my mom…” she trailed off in an attempt to buy time to figure this mess out. He beamed at her, the smile reaching his slivery gray eyes. “Great, so say sevenish? After the game tonight?” She opened her mouth, but the words whipped about in her brain, refusing to come out. She closed her mouth with a snap. She felt herself nod once and prayed that her thoughts weren’t visible in her face “See ya then, Makenzie.” He tugged the end of a long lock of cinnamon colored hair and vanished around the corner leaving Makenzie to her scrambled thoughts.

“Why did he call me Makenzie? Why didn’t I mind? Did I just make dinner plans with a guy I’d just met? Did he just call me cute?! Why aren’t I freaking out?” Questions whirled around her fried brain like leaves caught in a tornado, and it was several minutes before she could form a coherent thought and even then it was a question.

“What the heck just happened?!”

She really wished she knew 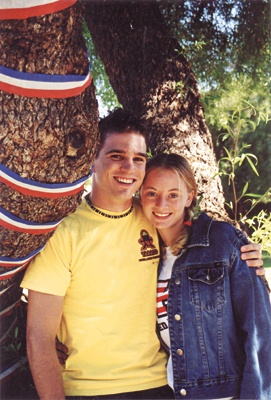 The author's comments:
Aaron and Makenzie are two unique characters that I've been working with for a while, and if they work out, I'll write more about them.
Post a comment
Submit your own

SarClark BRONZE said...
on Feb. 6 2010 at 4:21 pm
SarClark BRONZE, NC, Connecticut
2 articles 0 photos 534 comments
View profile
Omigod, this literally happened to me, except for the last part. The super quiet kid comes up to me while I'm drawing in art and just says, "That's really good" idk if he even knew mi name... REALLY good.