Favorite Quote:
"Be who you are and say what you feel because those who mind don't matter and those who matter don't mind." -Dr. Suess

Arielle stroked her long, red hair with her diamond-studded brush. She sighed. Why did her parents have to take her phone away? Come on, it was an iPhone! Something she definitely couldn’t live without. And she was really excited about impressing her new friend, Kenzi. How could she be impressive without her iPhone? But later that day, Arielle found out that she didn’t need to be impressive.

“George, I told you about being prompt. And you’ve disappointed me! Arielle SPECIFICALLY said that she needed you here by 4:00. It is CLEARLY 4:01!” said Arielle’s mom, Penelope. Arielle frowned.

“Well, if you want to arrive at your destination by 4:15, you’d better high-tail it on in,” said George, Arielle’s limo driver.

“Never get smart with me again!” said Arielle, climbing into the giant, slick, black limo. She immediately popped open a wine-bottle full of non-alcoholic sparkling apple juice and poured it into a martini glass.

“So about this new friend, you said she lives in Elkwoods? You do happen to know that Elkwoods is the poorest neighborhood in Erie Heights, don’t you?” said George.

“Yes, George. I’m aware of that,” said Arielle in a very annoyed tone. “But Kenzi wears Abercrombie, so she can’t be that poor. I know its not totally top-of-the-notch, but Abercrombie is pretty pricey, excuse my middle class-ness.”

“All right, then. Well, it looks like we’re here,” said George, his voice shaky. Arielle couldn’t help but letter her mouth fall open. She was sitting in a limo in front of a teeny-tiny bungalow house, that wasn’t even worthy of being called a house.

“Are you sure this is the right address?” she said.

“Have a good time,” said George. His face showed that he was nervous for Arielle. But he pulled away, and left Arielle to face what might or might not live up to her expectations.

She debated ringing the doorbell, but it was covered in what looked like car oil or gasoline. So she rapped her fist on the door twice, and a heavy, un-formally dressed woman opened the door.

“Um….hi. Is this the Toups residence?” said Arielle.

“Oh, you must be Arielle, Kenzi’s new friend! Well come on in! I’m her mother, but you can call me Mary,” said Kenzi’s mom, motioning Arielle into the tiny house that smelled of cat pee and smoke. Arielle was growing more nervous by the second. But she stepped into the house anyway and walked towards the door that had a glittery pink sign reading, “KENZI” on it.

“Hey, you got a boyfriend?” said a tall high-school boy that must have been Kenzi’s brother. He whistled as Arielle walked by.

“Oh, hey Arielle! Sorry about my brother. GO AWAY, TRAVIS!” said Kenzi, leading Arielle into her room. It was unnaturally small and smelled bad. And then Arielle saw Kenzi’s open closet that was full of Wal-Mart designer rip-off clothes. The “Abercrombie” apparel that Kenzi had worn on her first day at Meredith High School were really Wal-Mart 5-dollar counterfeit couture.

“So….what do you want to do?” said Kenzi, shutting and locking her door.

“Um…..anything’s fine,” said Arielle, and before Kenzi could speak, a man’s voice boomed through the house.

“Dinner time!” the voice said. It happened to be Kenzi’s dad.

“What are we having?” said Arielle. Normally, she would have asked for caviar, but she knew it wasn’t going to happen here.

“Roasted pig, I think. Uncle Tom sends ‘em in every so often from his farm,” said Kenzi. Arielle had to hold back from hurling. And when they finally arrived at the dinner table, Arielle saw Kenzi’s mom wiping what looked and smelled like cat poop off the dinner table…..with her shirt.

“Oh, sorry girls. Pumpkin had a little accident up here,” she said, blushing.

“That silly goose! How many times do we have to tell her to stay off the table?” said Kenzi, giggling. Arielle fake-giggled, too. But when she saw the cat hair in her glass of 2% milk, which she already hated to begin with, she simply ran right from the table to the front lawn. She typed in George’s number on her emergency LG Rumor (which was TOTALLY out-of-style for her, even though it had a full keyboard) since her iPhone had been taken away. He pulled up in front of the house within minutes, and by that time, Kenzi had gone to find Arielle.

“Is everything okay?” said Kenzi, her face worried.

“Um, I don’t think we can be friends,” said Arielle.

“Because…..well, no offense, but you’re poor, your house is small, ugly, and dirty, your clothes are fake-

“Just shut up, Arielle! I knew being friends with a rich snob would never work out for me, and I don’t really care. So leave…..NOW!” said Kenzi. Arielle felt totally dissed. Dissed by a poor girl.

“I didn’t mean to offend you….I’m really sorry, Kenzi. I know, I’m being a total brat. Its just that, there was cat poop on the dinner table, cat hair in my milk….,” said Arielle, completely and honestly sorry, for the first time in a long time.

“Oh…..right. I’m sorry, too. That must have been really gross for you. I’m just used to it, that’s all. Say, wanna go get some pizza and learn a little more about each other? Like, try to be friends again?” said Kenzi apologetically. 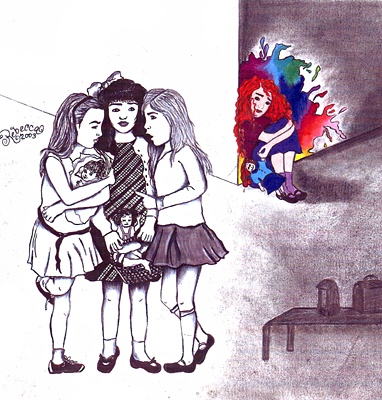 trombonewriter BRONZE said...
on Jul. 17 2009 at 10:21 pm
trombonewriter BRONZE, New Glasgow, Other
2 articles 0 photos 15 comments
View profile
This would be really well written, except that the ending was too cliched. It works, you have the very snobby rich girl meeting the poor girl out of context and thinking that they would me really good friends, and they do, but the sudden reversal of Arielle's opinion at the end is just too, well, sudden. It would probably work better if you had Arielle storm away then but have her get to know Kenzi better over time, say a couple of weeks or months, at school or something, then something really happens to upset Arielle, and so on....This version is really as cliched as the other, but it does work better in that it lets the characters develop more naturally and you can play around a little better. Other than that, it was really well written. Keep it up!