Favorite Quote:
“I can do all things through him who gives me strength” -Philippians 4:13

Every day, when he walked through the door, he thought she’d be there. He never forgot the first day he had laid eyes on her. She had been born very small, the nurse had joked and said she was a pixie, but he had loved her at first sight. In the weeks that came he would spend hours online, researching the best formulas or diapers or even pacifiers ( despite her not yet being in that phase). His boss repeatedly had to tell him to get back to work, although he was very understanding, he had gone through the same thing when his son was born. When he got off, he would go shopping for hours, and then arrive home to give his wife a break and to bottle feed (and later, feed with baby food) his daughter. His happiest moments in life were sitting in complete silence on the back porch, overlooking a gently sloping green field outlined with a brilliant sunset, interrupted only by the soft mumbling noises the baby made. Whenever he saw a soft pinkish orange hue, he would always whisper “look peaches, God is celebrating you in the sky.” Peaches was his nickname for her, from her name (Peace) and a particular love for peach flavored baby food.

One of his favorite memories was her winning the swimming contest at school. He had almost changed her nickname to minnow, owing to her lightning speed in water, but had stuck with peaches as her love for them had also stuck. He remembered the feel of her wet hair against his cheek when he gave her a huge hug, and the cool of the medal bumping into his neck. Downhearted by these memories and by the quiet in the house, he began to climb the stairs. He looked towards a rocking chair he kept in the corner of the living room. It had been his wife Helens favorite. She had always said she was keeping it till the day she died, and it hurt him that she had instead died in a hospital bed, as cancer drained the last of her life away. His deepest regret, besides the fact he wasn't able to stop that driver, was that Peace was too young to even remember her mother. He had resolved to keep the rocking chair, either till he died or it broke. Miraculously, although it had a deep crack along the bottom rocker, it still worked. Not that he used it, too many memories.

When he went to the top of the stairs, he decided not to go to his room and instead went into Peaches. When he entered the room, his legs gave out and he collapsed on the bed, overwhelmed by the pain of losing his daughter. Why did you take her, lord? He cried internally. I miss her so, so much. He lifted his eyes and scanned the room. Her many medals, both from swimming and academics, were collecting dust. Their shine was dampened. On her dresser, a letter to her favorite college was collecting dust. He couldn’t bear to dispose of it or even move it. On her nightstand, her Bible was left open. He picked it up and read over a few verses, then set it back down gently. He hung his head once more, he knew he would see her and his wife again, but he had never been a patient man. He missed them all too much. The day replayed in his mind: he had been watching the news when suddenly a report came on about a crash. The cause had been a drunk driver, no more than twenty, who had swerved out of control after having to vomit. At the time, he had almost felt bad for the man when he was led away with a bleary look in is eye and puke dripping down his chin.

Then he saw a picture of the victim. Of his daughter. He could almost have imagined she was asleep, aside from the line of blood dripping from her head. At least she looked peaceful. The first moment he saw her, he was in shock. Then he thought he was dreaming. Then he collapsed to the floor in anguish, sobbing in a way no man— nay, no human— should ever have to cry. The officers came a few hours later, apologetic and obviously sympathetic, but he couldn’t understand. Nobody could. And now he was fired from his job because they expected him to work with a broken heart. Nobody should have to do that, it weighs everything down. It feels like you're going through life with a hundred pound spiked ball tied to your chest. With each step, with each move, you can feel it stabbing and weighing you down. In her room, on her bed, he felt that weight pull him down to his knees. He lay crying as he did that night. All into the night, and through the morning.

He woke up at about ten. He knew he couldn’t go to work, but he had to go somewhere. He got dressed and ready and then left through the front door, glancing at the rocking chair and frowning as he did. He hated that crack, when Peace made it playing monkey-girl it was one of the few times he got angry at her. He had promised God, and begged him to allow him to keep his promise, that he would take care of it and ensure it stays in one piece till the day he died. He shook his head then left, getting into his car and starting it on the third try. He drove with his head drooped, barely paying any attention. Suddenly he heard a horn. His head snapped up to see a huge semi going straight towards him. He braced for impact and felt a sharp pain in his neck, then an odd relief as he slipped, he assumed, into unconsciousness.

He woke to a bright light. A doctor's room? He opened his eyes to the brightest sapphire sky he had ever seen. But there was no sun. He got up and looked down in surprise, he was lying on a shiny yellow road. When he looked around he saw that the buildings were expertly made, and of the same yellow substance. It almost looked like…gold! A faint bell rang in his head, he had read something somewhere about a city made of gold… his train of thought trailed off and he froze in place as he saw the two most beautiful things in the world walking towards him. They were clothed in white, and looked oddly alike. They both had yellow hair, blue eyes, a wide smile, and were clothed in white, one seemed younger than the other. He stood with his mouth dropped open as the younger one noticed him and gave a little cry of joy, running towards him with the older in tow.

The two men were clothed in moving uniforms. They cleaned out the man's belongings from the house slowly, knowing they were being paid for time. They had to do some work, however, and they started with the living room. One man stopped at a rocking chair.

“Hey, Clyde, what should I do with this?” Clyde was the eldest and the younger usually burdened— er, asked his advice about— things he was unsure of. Clyde looked at him with tired eyes.

“Oh, I don’t know, Jim. It’s a rocking chair in a dead man's house, we are being paid to move things in his house to a van to be taken to charity so, on a hunch, maybe you should move it to the van?” Jim glared at him.

“I would do that, Clyde, but it’s broken. The bottom rocker is cracked clean in half. Nobody would want to have it, not even a charity.” Sighing loudly, Clyde came and examined it, which was indeed broken in half. While doing so, he tried to keep up small talk.

“So, kiddo, you know how the house owner died?” Jim shook his head. “Same way as his daughter, a car crash. His was caused by a semi driver texting his girlfriend, his daughter’s was by a drunk guy. The girl cracked her skull, and the man broke his neck. Anyway, I’m sure they are in a better place now. The wife died a few years back of cancer, so it must be a happy family reunion in heaven right now. Nonetheless, let that be a lesson to you, kiddo. Don’t drive drunk and don’t text while driving. Better yet, never do either. Back in my day we just met in person or sent letters, and alcohol has no use except to fuzz your brain. Anyways, this rocking chair is totaled. Throw it away, I’m sure it was never of any significance. 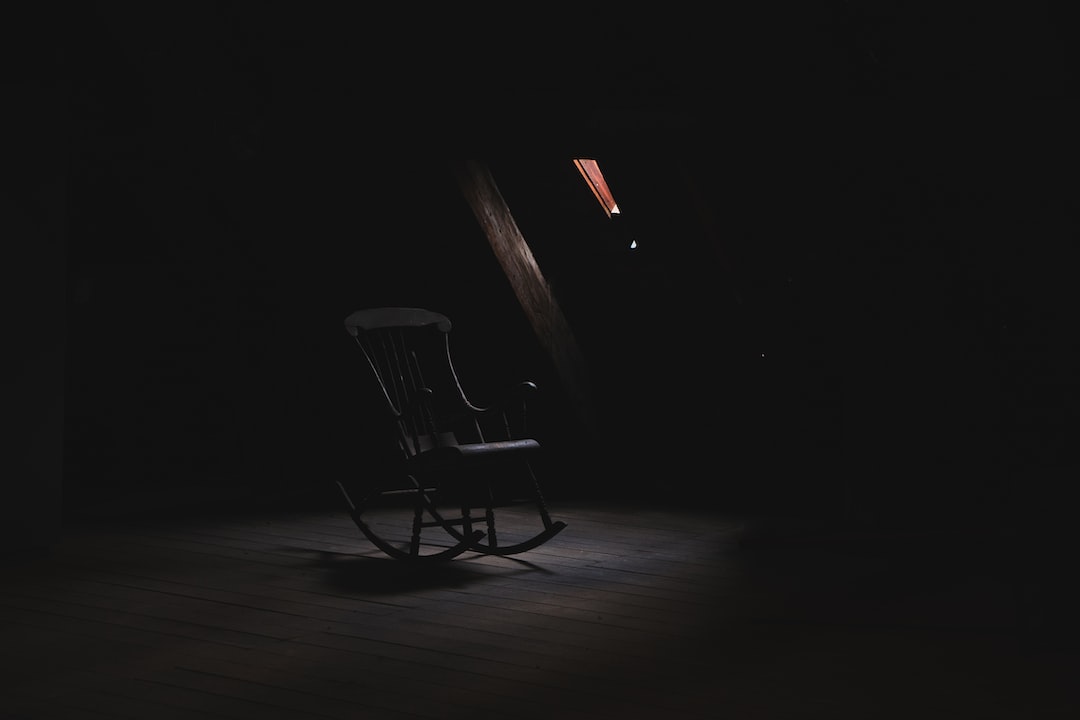 Photo by Anthony DELANOIX on Unsplash

the man has kept the rocking chair since his wife died, but the crack in it (caused by his sweet daughter Peaches) haunts him. He swore he would keep it in one piece till the day he dies, and he only hopes God allows him to keep that promise. He couldn’t face his wife again (in heaven) knowing her favorite chair broke on his watch.