Unsung Heroes of the Night MAG

Sometimes you have to make a decision. It might not be the best decision, but you make it anyway. When the only course that lies open to you is the low road, the one shrouded in shadow and lies, you know. You know it’s the endgame. The cards have been dealt. The die cast.

My name is Jack, and I am going to die. I know this: “On a long enough timeline, the survival rate for everyone drops to zero.” Mine just dropped a bit earlier. The man sitting across from me, balding and married – judging by the ring on his finger – shifts uncomfortably and strokes his eyebrow. He doesn’t know what was avoided this night. He sees me as a hired thug. He’s right – sort of. Sometimes, when you walk in the dark, it takes a shadow to light the way.

“So let’s go over this again,” says the D.A. in the knock-off Armani suit. “Start at the beginning, please.” He wants me to talk about my job with the Face. “Friday, May 3, you were unloading crates down by the wharf.” He is filling in details that we both already know.

“What was in them?” I knew what was in them, but when you work for the Face you don’t ask questions. “I never asked.” Questions can get you killed.

“What if they were dangerous? You could have been killed.” He is trying to play the role of the good cop: I’m your friend, help me help you.

Flippancy – my wife used to say it was my only flaw.

“No health plan, though.” He is referring to my current condition; even if I survive, chances are the Face knows what I was up to. Either way, it doesn’t look good.

“These things happen.” He pauses, tries a different approach.

“Out of everyone we pulled from the ­river, you are the only one,” he pauses and looks at me, “alive. And you pass it off as if this is some sort of giant joke.”

“Laughter is the best medicine.” I start coughing and notice a metallic taste. He tries again.

“You were the only one who lived. Why do you think that is?”

“Luck.” He knows I’m not telling him everything – got to give the man respect for his tenacity.

“So you were unloading crates and you ended up in the river half alive … there’s a lot missing here.”

Like how one of the other men had a grenade. Like how even the best-laid plans can go horribly wrong. Like how I started working for the Face.

“Care to tell me why you started working for the Face?”

Jimmy – that s*** – went to school with him and knew I needed cash. “So what if you hafta kill some people once in a while? Thems probably deserved it,” he’d said.

“Cancer treatments cost a lot.” He flips some papers. “Ah yes, your wife died of leukemia last year.” God, I miss you, Aims. “So you were moonlighting for the Face.”

“And when she finally died, you started working for the Face full-time?”

Not until he came, a shadow in the dark, told me he needed help, that the Face was planning something, something big. That he was after the kids. The shadow said that I could help. He gave me a purpose.

“Not just an errand boy, were you? The Face trusted you. You see, we have reports that show you as pretty high-ranking among his lieutenants, practically his right-hand man.”

“Something like that.” Not that being trusted by a psychopath gets you much, other than a head start.

“What was it they called you? Ah, yes – the White Knight. Not after your snappy dress sense, I take it.”

“No.” The boys probably thought they were being witty naming me after that urban legend.

“It seems you got your name from your ability to talk the Face out of mindlessly killing innocent people.”

“You expected honor from that nut job?” Silence. He shifts uncomfortably. The silence grows as he strokes his eyebrow, then starts again. “So you were unloading crates and something happened, something you hadn’t planned on.”

Pain flares up. The worst part of this night is not knowing.

“Someone showed up that you weren’t expecting. There was an explosion, and everyone died … except you.”

Not knowing if I made a difference, if the Face was stopped.

“Who showed up? What happened when they did? Who killed your friends?”

“Not my friends.” Coughing blood.

“What was in the crates?”

“You could have told him sooner.” A shadow in the dark.

“I wasn’t sure if you were alive.”

“I made it. Thought you would like to know that the Face failed. His plans are ruined; he won’t recover for a long time.”

“They’re after you, you know.”

“What are you going to do?”

Unspoken, my question hangs in the air between us.

“Here.” He hands me the morphine control. “I’ve taken the safety off.”

“You will be remembered for what you did – an unsung hero of the night.”

My eyes close. God, I miss you, Aims. And I press the button. 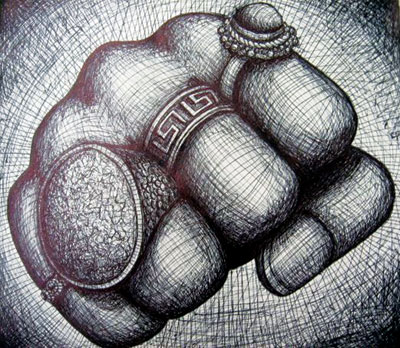 This article has 26 comments.

Favorite Quote:
"Every story has an end, but in life, every ending is just a new beginning."
-Uptown Girls

View profile
This... was... AMAZING! That is REALLY inspiring! If you plan on publishing a book, I suggest you keep on this one. It is extremely easy to tell you are an author. Seriously.
Zero_K DIAMOND said...
on Jun. 21 2009 at 8:56 pm
Zero_K DIAMOND, Moosic, Pennsylvania
83 articles 0 photos 435 comments

View profile
It's amazing, but I wish I understood what was going on. Oh well, that is art. Sometimes I don't even completely understand what my own stories are about.
Schubster said...
on Jun. 19 2009 at 1:18 am
OMG that was an incredibly story. You are DEFINATELY a writer. Keep up the great work!
*LunaNight* GOLD said...
on Jun. 18 2009 at 5:40 pm
*LunaNight* GOLD, Staten Island, New York
12 articles 0 photos 46 comments
View profile
i read this story in the magazine, and even though it confused me at first, i read it again and thought how brilliant this peice is. you did really good, keep it up.