This letter is a brief statement of the reason why I made my decision.

Twelve years ago, I was a 28-year-old woman with a decent job as a bartender and a newlywed husband who worked in the office building next to my bar. He always accompanied me home after my duty ended late at night. One night in December, as I so vividly remember, he was held back at work and could not pick me up, so I returned alone. The alley was ever darker, and as I noticed myself gradually besieged by shadows, I began to shiver in fear. Suddenly a large hand covered my mouth. A muscular body pressed upon my own, and when my clothes were ripped wide open yet not a single scream could be uttered from my frozen lips, I was certain that my world would end. But at that moment, an unfamiliar voice came up behind those lubricious cheers, releasing the burden on my body and bringing my spirit back to this world.

It was dark, pitch dark in the middle of the night. The visage of all participants was draped in forever shadow since I was too terrified to even look up and at least remember the shape of the one who saved me from eternal death.

I moved away from the neighborhood after that night, but memories like that one stick in one's mind no matter what. In endless nights of insomnia, I let my grief out on my dear husband, who was also pressured by guilt for not accompanying me home that night. Everything ended in a divorce. I lost the little piece of life in my womb because, to this day, I do not know whether it was the product of me and my husband or the result of that night.

After the divorce, my place became fixed every night—leaning on a stool behind the counter, mixing drinks that fuel the interactions among people of the opposite gender, which, ironically, was what caused my misfortune in the first place. But no, I did not care. My life was gone along with my first and only child that had not even come to this world, the product and victim of unchastity, and there was no spirit left in me to feel pain.

Being an instigator of such "interactions" granted me such security that later I became a part of my workplace. Not many customers would come after sunrise, and so by lining up three stools side by side I could make myself a bed, and I would rest behind the counter until late in the afternoon when service bells start ringing frantically and another night of instigation begins. And this continued for eleven years.

The only instance when I was forced to leave the bar was when I took out the garbage before daybreak. To get to the disposal center I had to cross a half-abandoned alley without any street lamps, much like the alley of that night. But I did not fear, since my heart was no longer in my possession; if taking away the soul would ease the pain of the body, why would a traumatized woman choose not to walk in daylight—why would she choose not to flee eternal night.

Now, returning to the purpose of this statement letter. Two days ago, when I went to take out the garbage as usual, I found a slump of shadow in the usually vacant alley. In the moonlight I made out two persons in that slump—a man and a woman, two distorted figures, one naked and the other only partially clothed, one attacking and the other struggling for escape. At that instant I was positioned in a dilemma since I knew that in that night's garbage, there was an old blunt kitchen knife that I no longer wanted. It would not likely kill the beast, but it would at least buy her some time.

However, struck by the similarity between her suffering and mine, I succumbed to my own selfishness: I did not pull that knife out from the garbage bag and save that woman. I escaped as if I did not see the scene in the first place, and with my garbage bag, I returned to my cozy place in the bar.

But the memory of that scene was stuck in my head—how the woman's shrieks were absorbed by the man's violence, and how that distorted shape of a body seemed to scream "save me, save me, save me...". And every time that scene crept in, I felt myself reliving that December night twelve years ago when my body screamed. Yes, I did begin to fear.

After sunrise, the streets became filled with people rushing to their jobs, and I gained the courage of entering the alley again to take out the garbage. Silence filled the empty space, and the misty morning sunlight cast its radiance upon a woman, lying in a pool of blood, naked.

I positioned a shivering finger under her nose.

It was already a corpse.

And at that moment I felt my own rationality slipping away. Another soul came to take possession of my body as I pulled out the blunt kitchen knife in the garbage bag, and stabbed it into the woman's chest.

At that instant, I did feel the pleasure of rebirth, as if stabbing her body brought back the life of another. I had a horrific notion that I was killing myself from twelve years ago and saving my spirit in the present. Twelve years ago, an unfamiliar interloper in the night rescued me from eternal death, without which I would have been the one lying in a pool of blood. Two days ago, I was the interloper, and I had the ability to save that woman, but I escaped, believing that it was none of my business. But it was, since my life was given to me by the stranger, so if I lose it when doing the same deed as the one who gave it to me in the first place, it would have been a form of repentance. Life was a tug-of-war between two parties: me, and the rest of them. The “rest of them" includes that woman, the stranger, and even that man—they are all "them", and I am the only "me". He saved me but I did not save her—I no longer deserve this life that he had given to me.

Last night I dreamt that I was back in the old alley, and surrounding me were the dark shadows of that night—I had been attempting to make out the exact appearance of those faces for my entire life! Last night, the mist faded away for the first time. Behind the veil lay a man, bruised and scarred and slumped against the wall with his eyes shut, his skin as pale as a ghost and void of all sense of life. I stared as blood trickled down his empty eye sockets, and his swollen eyeballs, like fallen angels, withered on the freezing grounds of the dark alley.

And the scene ended as I awoke. Yet the image of his skin and blood still lingered in my mind. Twelve years ago, he gave his life to revive mine, yet two days ago, I did not pass it on when it was time. I kept mine, which was my largest guilt, and I cannot forgive myself for losing to "them".

Now I have stabbed myself with the same knife that penetrated the woman's chest. Lying here beside her, I hope, would give my spirit the assurance that I did the right thing to give up my life, even though the life of this woman would never ever return.

For whoever found this letter, please do not take it away from my shirt pocket. Bury me along with it so that the guilt could follow me to the afterlife. 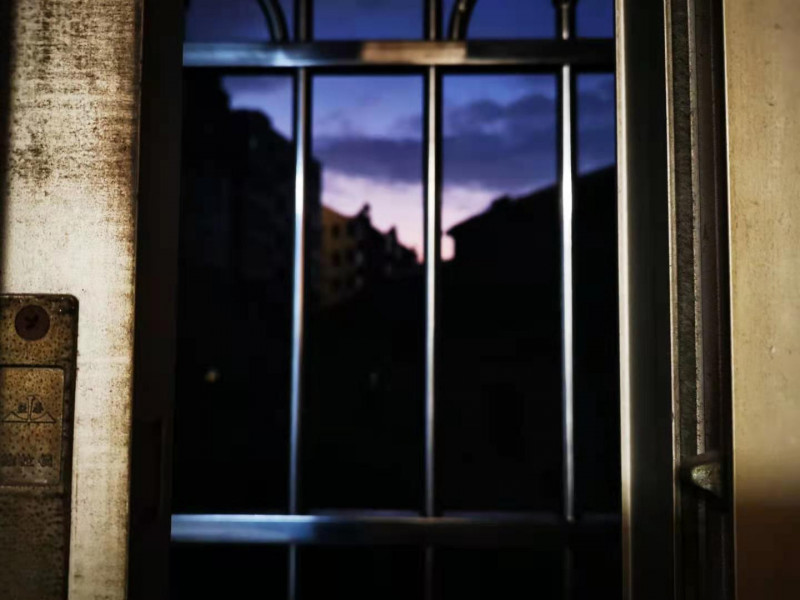