Favorite Quote:
“Be yourself; everyone else is already taken.”
― Oscar Wilde

The piano was passed down from generation to generation in the Jones family. The current owners of the piano was a famous archeologist named Mary Jones, and her daughter Melanie. Due to her mother’s job, the duo had to move around a lot. Everything in the Jones’ house was packed in boxes except for one thing which is the piano. The piano stood in a corner. It was a beautiful antique. With its polished brown wood and shiny keys, it was the best thing in the house. Even though the Jones’ move around all the time, they always have the piano. The piano was like their home. They found comfort whenever they played. Melanie sat at the piano playing her favorite piece “Moonlight Sonata” by Beethoven. She played this song every time she and her mom were moving. It brought her an unusual comfort. This time they were moving to England so her mom can study the mysteries of Stonehenge. “Melanie, it’s time to go,” says Melanie’s mom Mary. “Coming,” says Melanie. The movers started taking the boxes from inside their house and put them in the van. “Be careful with this,” says Melanie while pointing to the piano. The mover nodded. Melanie and her mom took a taxi to the airport. Melanie sat on the plane wondering how the piano was doing. She was feeling anxious. She wanted to play the piano but couldn’t. She was scared about moving to another continent. She has never even been outside the United States before. Fear flooded her body. She turned on her iPod with the recording of Moonlight Sonata. There were only a few hours left on the flight. She closed her eyes and fell asleep. Melanie and her mom Mary arrive at their new house in England. Not all the boxes were there. Melanie looked around the house. She was looking for the piano. “Mom, which box has the piano in it,” asked Melanie. “I don’t know. If we unpack everything, we would probably find it in one of the boxes,” says Mary. Melanie nodded. Melanie and her mom unpack everything. The house started to look more like home, but there was one thing missing. The piano. The piano wasn’t here. Melanie started to panic. She and her mom just lost the most important thing in their family. “Mom, the piano isn’t here!” yelled Melanie. “I’ll just call the airport,” says Mary trying to be optimistic. Melanie sat on the couch for a few minutes wondering what happened to the piano. Mary went back downstairs a few minutes later. “The plane that the piano was on just got delayed. It should be at the airport in a few hours. Melanie nodded. Melanie didn’t know what to do for those next few hours. She sat. She read. She watched television. But none of those activities would entertain her as the piano would. 4 hours later, Melanie and her mom drive to the airport. They walk to the baggage management booth. The lady in the booth led the duo to a back room with a ton of bags and boxes. The lady comes back with a box. An excited Melanie quickly opened the box. Inside the box was the piano, but instead of it being a beautiful antique, it was a pile of useless pieces of wood. 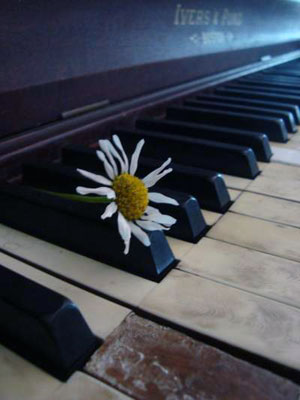 This piece is about a girl named Melanie who loses her beloved piano.