Favorite Quote:
"Train yourself to let go of everything you fear to lose" -Yoda

The sun was beating down upon me as I clutched my daughter close to my heart. I was in a field amongst two other women, desperately attempting to pick enough potatoes to sate our hunger before the officers came around to kick us out of the field. They had been stationed here for months now, and still the inhabitants of my village shook with every step they took. As the summer sun drenched me in sweat, I reminisced about the days before the war. My husband was still with us and my baby had a brighter future on her horizon. Now, as I stood slaving away at the soil, I realized how bleak her life seemed now. As I stood contemplating, I realized everything in my life was at a dreary standstill, when suddenly, the women beside me, who were desperately attempting to gather food for their families, stood up straight, frozen. As I straightened up to look and see what they were panicking about, a breeze wisped through the crops and encircled me, reminding me of the biting cold Russian winter that I had grown so accustomed to. I turned to see what had caused such a great disturbance, yet I already felt the tension growing in the ladies and had an inkling of what it was. This was not an uncommon phenomenon in our village, though I had never had to deal with it so up front. The war had claimed many victims, and I faced my own mortality as I turned to see a Nazi soldier walking up towards me, sweeping across the grass like the Angel of Death himself. We lined up, frozen in anticipation.

The sun shone colder on the July day. Although I knew death was upon me, I did not fear for myself. I feared for my daughter, my baby Nina. Stories and tales always told about how your life flashed before your eyes in moments of mortality, but my daughter’s life flashed before mine instead. Her spending her childhood laughing with friends, going to school for the first time, her first job…

As I fantasized about her future, a tear rolled down my cheek, streaming down my pale skin and landing on Nina. I looked at her and her raven hair and porcelain skin. I looked her over in desperation, desperation to get her out of this situation, to keep her alive, to save her. Suddenly she looked up at me, perfect chocolate eyes piercing my soul. Right at that moment, the world around me went mute; birds stopped singing, crickets stopped chirping, and the wind suddenly ceased to dance around the field. I could hear my blood pulsing through my veins as the deafening silence consumed me. The officer, looking infuriated, drew his gun and walked over to us, his eyes gleaming at the prospect of getting to blow off some steam. His stress exercise would destroy my family. My heart hammered as I whispered prayers to every saint I could think of. 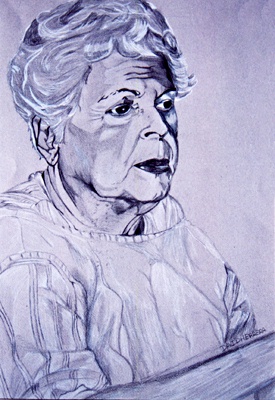 This was written from the point of view of my great-grandmother during WWII. The Nazis had taken over her village in Russia and she was left there without her husband for the greater part of the war. She was forced to fend for herself and her daughter while the Nazi soldiers terrorized her people.

Favorite Quote:
"In the end we only regret the chances we didn't take." -Tumblr