Tuthmosis and some of his friends were playing a game when I came in the courtyard. Some people looked up but then looked down fast.
“C-can I p-play w-with you?” I asked quietly. It wasn’t quiet enough because everyone stopped what they were doing and stared at me.
“No!” a girl squealed. “You’re too ugly to play!” After that, the taunts kept coming and coming without any stop in sight.
“Go back and play with your horsies!”
“You’re a waste of space, looser!”
“You should be exiled to the desert!”
“I can’t believe that Pharaoh even calls you his son! If I were Pharaoh, you’d be dead by now!”
“Even the gods laugh at you! Why would they put you here?” That was my breaking point. I crumpled to my knees and started to sob violently. No one did anything, not even my brother. I could hear them laughing loudly at my misfortune.
“He’s a freak and a cry-baby!” Just then, a girl separated from the group and stood between them and me.
“Stop it!” she cried. “Can’t you see that you’re hurting him? You’re all meanies!” She then kneeled down in front of me. I had stopped crying my eyes out, but tears still ran down my long face.
“Are you okay?” she asked quietly. I looked up. She smiled kindly at me.
“I-I’m o-okay,” I replied. I looked back at Tuthmosis, who was imitating me falling on my knees and crying. She looked at my brother and got up. She got in his face and he shrank back a bit.
“First, you tease him, and now you’re imitating him? You’re cruel!” She pushed the crowned price to the floor and then held out a hand for me.
“Y-you’re b-brave,” I said, a bit shocked and a bit impressed.
“I’m probably more foolish than brave,” she muttered. Smiles broke out on both of our faces.
“T-thank y-you,” I said after a moment’s silence.
“No problem.”

I looked at Kiya. She was the one that had said that was enough and had the courage to stand up to her friends, even the future ruler of Egypt.
“Thank you so much,” I said.
Kiya didn’t reply. Instead, she brushed her lips on mine. I returned her kiss, and it slowly intensified. Time and space didn’t matter. After a while, we separated. We both gasped for breath and smiled wickedly.
“That was fun,” I said through deep breaths.
“Yeah, it was.” Kiya’s voice took on a different tone. “Let’s retire to your chamber.” So we got up off the bench, and walked out, arm in arm. Just as we were leaving, I felt like someone was staring at me in the bushes. I looked behind me, but no one was there.
“Did you see something?” Kiya asked.
I shook my head. “No. I must be a bit tired.” But I had felt something. There was only one person that had piercing eyes in the palace: Nefertiti. It hit me that she was watching us in the bushes. What was she doing? I mentally shrugged and turned my attention to Kiya.

After the seventy days that it took to mummify, Tuthmosis was laid to rest in his tomb. He was buried with all the things that he would need for the afterlife: food, clothes, games, bows, and much more. After his tomb was sealed, we held a feast in his honor. Everybody was subdued and barely anyone talked. When the feast was done, Father stood up.
“I have lost my eldest son, but not all hope is lost,” he announced. “My younger son, Amunhotep The Younger will take the throne of Upper Egypt.” Was it just me, or was there bitterness in his voice?
“Also,” he continued, “Tuthmosis’s future wife, Nefertiti, will become Amunhotep’s wife in five days. May they be blessed with many children!” The feast was over, and after it, Nefertiti talked with me in my garden. Kiya was asleep.
“I can’t believe it,” I whispered. “Now I’m Pharaoh of Upper Egypt and I’m going to have two wives.”
Nefertiti’s eyes shone in the dark. “I know.” She suddenly looked me in the eye. “I’m glad I’m not marrying Tuthmosis. I have to admit that he was not my type. At least my husband is someone that has the same interests of mine.”
I brought Nefertiti close to me. “I’m glad too. Kiya only talks about women things while you dare to venture where only men dare to go.”
Something clicked in Nefertiti’s eyes. “You know, when you become Pharaoh of Upper and Lower Egypt, you’ll have to choose a queen.”
I smiled. “I think I made my choice already.” 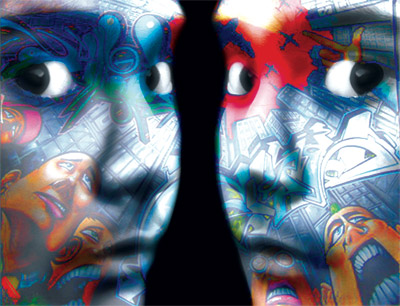 The author's comments:
This was one of those pieces that came to me after I watched the History Channel for five hours straight. :) I know, I'm crazy
Post a comment
Submit your own