People pass me, some staring stupidly, others looking away after a little glimpse. I wasn’t supposed to be here. If I could get out, I would find someone that loved me for who I am. I’m supposed to be in the arms of a little girl, not in a museum case. I try not to move, but I give in. I move my head slightly and a little girl points to me.
“Mommy,” she whispers. “I saw Robert move.”
The girl’s mother hushes her. “No, sweetie. Robert didn’t move. Your eyes are playing tricks on you.” Yes, blame your eyes. But I really did move. My button-like eyes sweep over the area. It’s been the same as when I first got here. I let a slight sigh escape. At least that little girl is gone. The hours tick by. Soon enough, it’s closing time at the museum. After everyone is gone, I stretch like a cat. I wait patiently for the night watchman to unlock my door so that I can walk around for a bit. He comes over to my display and opens the door that keeps me locked in this prison box. He smiles warmly as I jump out.
“Robert,” he says. “Be careful. Don’t go by windows. I’m sure that joggers have seen you looking out the windows multiple times.”
“What? I can’t keep my curiosity under control.” The watchman walks off, laughing at my comeback. I of course, walk down to the window and draw back the curtains. The world goes on as I watch. Cars and taxis zoom down the road in front of the museum. Joggers, listening to their iPods, pass in front of the museum. The Florida sun, slow as a snail, sinks towards the horizon. I sigh loudly. If only I could be on the streets, experiencing what it is to be a real human. What? You didn’t know I wasn’t human? What am I?
I’m a doll and I’m cursed.
Yeah, it seems like something out of a fantasy book, but I’m real. Here, let me show you what I am.

I was made for a little boy. I can’t remember his name, but I know for sure that his middle name was Robert. He named me after himself. The family servant/slave, Nikita, made me. She was doing a favor for the family, because the little boy that was my playmate didn’t play with any other boys in the neighborhood. She stitched me by hand and stuffed me with hay, the only stuffing she had. Nikita also practiced witchcraft. She put a spell on me that was intended for the boy I was made for and other people too. I could walk and talk without strings or someone making up my voice. Nikita told me that I was very special.
“Now, Robert,” she would always say. “You are very special.”
I always got confused at this point. “What do you mean by special?” I asked.
Nikita smiled warmly. “Robert, other dolls are just cloth and stuffing. But you, you’re real. You are alive.” After that, she gave me to the boy. I looked just like him. He was so excited to get me. He hugged me constantly and when he hugged me, I winked at Nikita. The boy soon became very attached to me. He took me everywhere. I went to church with him. I went to the park with him. We were joined at the hip. As he grew older, I started to rile things up. I drew on the walls and broke his parents’ things. They would always point the finger at him. He would always deny it and blame it on me.
“It wasn’t me, Momma. Robert knocked over the table.” His parents reprimanded him and kept saying that blaming it on me was not the right thing to do. After that, I had a lot of open conversations with the boy. Oh wait, now I remember. His name was Gene.
“How was your day at school?” I asked one day after he came home from school. I went everywhere with him except for school.
“It was okay. I flunked that math exam. Mom’s going to be really mad when she finds out about it.”
I walked over to him and patted him on the shoulder. “That’s okay. It’s just one exam. You can get your grade up again.”
Gene was on the verge of tears. “It counts as one of the final grade at the end of the year. I have a C, so I’m probably going to get an F.”
“Gene, it’s just one subject.”
“I’m failing in English and science too. I might have to repeat the year over again.”
I gave him a nice, warm hug. “You’ll pass to next year. I’m sure of it.” I ended as soon as I heard footsteps coming up the stairs. Most likely it was his mother, checking to see if Gene’s doing his homework. I fell limp right when she opened the door. She was frowning and looked really mad.
“Gene, who was in here with you? I heard two voices and one of them was one that I never heard before. Whom were you talking to?” she asked.
“Robert,” he replied.
Her face turned a deep red. “I am sick and tired of listening to ‘It was Robert that did it, Mom. Not me.’ I want to take away that doll right now and lock it up in the attic!”
Gene cried and grabbed me. “Don’t take away Robert! He’s my best friend!” My face was buried in Gene’s shirt, so I smirked. If only Nikita could see me now.
“What about your friends at school? What about Bobby and Jesse? Aren’t they your friends?” his mother asked.
“Yes they are,” Gene sobbed. “But at home, Robert is my friend.”
His mother gave in. “Fine. Keep the stupid doll.” She walked out after that. Gene set me on the bed. I sat up and sighed.
“That was a close call,” I said. “Our days are numbered, Gene. You’re growing up. You don’t need me anymore.”
Gene shook my shoulders. “I do need you, Robert. You’re the person I know I can count on.” After that, I talk to him whenever I can, alone or not alone. His parents were getting concerned about his welfare. One night, when Gene was asleep, I snuck out and started to listen to a conversation between his parents.
“It’s not normal, James, and you know it,” his mother said. “I want you to take that doll of his away.”
“Mary, he loves Robert. Why separate them?” James asked.
“It’s not right for a eight-year-old boy to still play with child’s toys!” Mary yelled. It was good that they were fighting. Nikita would have seen them and would start to laugh. I snickered at that. They were blissfully unaware that their son’s toy would become deadly.

At the museum, I was unloaded from the box. The museum used to be a Civil War fort. I was apprehensive as we entered. The woman that had brought me in her car explained what would happen to me.
“Okay, Robert, you’re going to be in a glass display case. We’re going to have you sit on your chair with your legs crossed with Gene’s dog on your lap.” She held up a stuffed dog that Gene would play with. The dog’s name was Nutmeg. “There will also be a bunch of letters on the bottom, so don’t pick one up in the middle of the day. And that’s a thing we have to work on. You have to be stationary for as long as you can during the day.” I nodded, understanding what she was saying.
“When do I go on display?” I asked.
“In a week. I think that you need to get new hay in your belly,” she said, tickling my stomach. I laughed and tried to get her to stop. She then picked me up and I was led into a room that was sort of a storage room. The people unbuttoned my sailor shirt and started to take out the old, disgusting hay that had been my stuffing for over a hundred years. They stuffed me back up with new hay and buttoned my shirt up. I walked out of there feeling like a new doll. I walked around the museum until the man from earlier, Nick, came up to me.
“C’mon, let’s go back to your display case,” he said. The case was too tall for me to get in, so Nick helped me up.
“G’night,” I said sleepily. I fell asleep soon after I heard Nick’s footsteps getting farther away. I slept for the rest of the week. As soon as I woke up, people surrounded me. I sat cross-legged on the chair, holding Nutmeg. Everyone was pointing.
“That’s a weird doll.”
“It’s so old.”
“Hey, didn’t you hear that it’s haunted?”
“Robert is a very interesting piece, isn’t he?”
I wasn’t listening to everybody. I was lost in thought. I’m going to be in here for a long time, I thought. Maybe another hundred years in this display case . . .

“Hey, Robert, you gotta get back in your case,” the watchman says, lifting me out of my memories.
“Okay,” I grumble as he helps me into the case. I grab Nutmeg and cross my legs. Since 1994, people have wondered about me. Was I haunted? Why did the family servant put the spell on me? You know now that I am my own person, even though I’m supposed to be inanimate. And please, don’t blab to everybody that you talked to a life-sized doll that is over a hundred years old and wears a sailor suit. 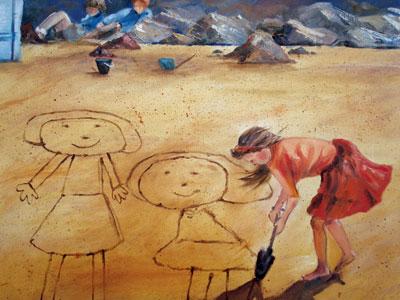 The author's comments:
I wrote this after I saw Robert the Doll on Mysteries at the Museum on the Travel Channel. This is Robert's side of the story.
Post a comment
Submit your own