The Pacific Ocean, alone, with chaos and ominous destiny on board, resembling that of the Trinidad.

Food supply is running out and we see no sign of land. The body of two cabin boys was found on deck this morning.

Seven years ago, I stumbled onto your expedition, hopelessly in debt and desperate for purpose. On the Trinidad you selected me as the second-in-hand. We set out for the Spice Islands, sailed into the Pacific, and as much as we fought the spread of scurvy together and managed a close win, here I am dying, once again, of the fatal disease.

I suppose, this time, it is me—the ultimate sacrifice.

20th of December, 1520. On the coast of Brazil. Salamón and Ginovés were taken off the Victoria by Captain Carvalho. You and I were left alone on the Trinidad as the other mariners gather supplies on land.

“Why should I. What did they do wrong.”

“Nothing. But it is the rule.”

“Yet we are the captains, we make the rules. Do we not have hearts to judge on our own.”

“Do we not have the right to break rules that, we know for certain, are wrong.”

“Then why should I ever carry out the trial.”

To prove. That you are not one of them. That we are not them.

The same fate awaits us if we were discovered.

Salamón alone knelt before us on the Trinidad. He did not look up. Mariners, who just returned from the tiresome labor of bringing supplies on board, circled around us to watch the moment of judgment.

I stood in the back, where you cannot see me, where you will not even consider the option of holding my hands or resting your head on my shoulders to gain strength. I watched the silhouette of the man I love in the middle of the crowd, approaching the guilty Salamón, whose melancholic eyes resembled our own.

I was praying, silently, that things would go smoothly, that you could manage to keep yourself together until the whole thing was over and we could go somewhere no one can see and I will allow you to share that burden with me.

We won’t make the same mistake. We will not be discovered.

In my recollection, there was no sound. Only an image of Captain Carvalho, his mighty arms, and then, a body being dragged away, numb and lifeless, into the fathomless waters pelting the shores.

And then you commanded to head onward. Towards the Spice Islands.

27th of April, 1521. Island of Mactan. You leaped off deck with forty men in the morning—"it’ll be over before sundown"—you never did keep that promise.

I kept myself calm, like the rest of the crew. We mourned but we did not weep.

That evening no one fell asleep. Some were celebrating, that the Filipinos did what the traitors could not do; others prayed anxiously for a safe return home.

The night wind passed its gentleness to the Trinidad, the radiance of the moon healing the wounds of tens of men who managed to survive. Your body was already taken to the Victoria, where Carvalho claimed leadership of the remaining expedition.

Power had been drained from my body. I tried to picture your image on the ship, just to comfort myself with a hallucination that you were still with me, that you would emerge on deck, staring into the calm, dark ocean and say “what a beautiful evening”. But I had not even the strength to remember.

Only one thought, a gnawing accusation, persisted in my mind.

Salamón. We killed him. And now you are gone as well. He, abandoned on the shores of Brazil. You, on the island of Mactan.

The Indians spoke of karma.

As the crew scavenged the land for supplies, Carvalho came to me on the Trinidad.

“This was what he wanted. Too bad he did not see this."

“Better not to,” I responded.

Better to keep the ocean voyage as a perfect fairy tale. Better not to witness brutality and desperation and defeat, and senseless numb men on board awaiting only the decree of fate. Between life and death was the presence of us.

“The cabin boy on the Victoria, accused of sodomy. You executed him, along with his partner.”

I went to meet them, Salamón and Ginovés, off the Victoria. I took Ginovés from Carvalho. I led him into the woods near the shore.

“I know what happened, Elcano. You let him go.”

“No, you let him go. What was the purpose of a silent execution—it does not prove to us your innocence.”

I looked up in awe as he nodded and turned away.

He stepped off the ship, singing.

The next day, Carvalho reported to the 20 remaining crew members his decision to step down from captain-general. And I was put in place instead.

Seven years ago, we started out for the Spice Islands. Every piece of our passion was aimed at the ultimate goal. Yet when I actually got here, the place we have all dreamed to be in, I felt no sentiment, or pride, or content, or relief.

Scurvy took the lives of thousands, even to those who never got it in the first place. The ailment of the body can never be compared to the sickness of the heart. And here I lie, dying of scurvy—the ultimate sacrifice. After I die, no one will remember the tales of us. After I die, no one will ever know that once upon a time I had poured my soul into you, my heart bursting with every wave of the sea monster that splashed on deck, my eyes as red as the sunset blaring in the horizon, where we see nothing but water, water, endless, painless water.

My coat of arms is still in hand, with the engravings by the royal crown.

¹ A 14th-century love song, Foy porter, by Guillaume de Machaut. Translated by Paul Brians: “For I love you so much, truly, that one could sooner dry up the deep sea and hold back its waves than I could constrain myself from loving you.”

² The following lines of the same poem: “Without falsehood; for my thoughts, my memories, my pleasures and my desires are perpetually of you, whom I cannot leave or even briefly forget.” 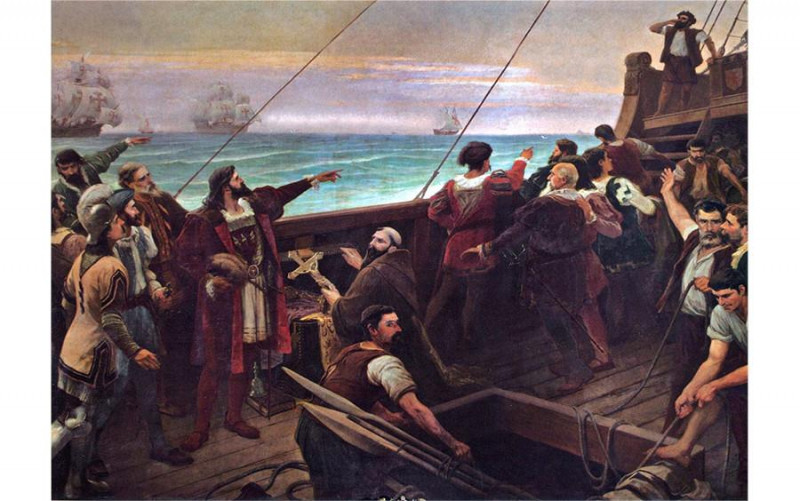