A tiny fly zooms over to my head, and lands near my eye. I squeeze my eyelids shut and try not to cry out as it bites my temples. Sarge warned us about horseflies, and how painful it was when they chomped down on your skin. The rest of the men in my squad took his statement with a grain of salt, but now, as the horseflies caused all of us excruciating pain, we began to reconsider.

Again, the fly chomps down harder on my skin, but I force myself not to shout in pain so not to alert the Vietcong troops 200 meters in front of me standing in a small field. Warm beads of sweat trickle down my arms and form stinging pools of watery salt. My leather gloved hands squeeze around the handle of my machine gun, and I await the signal from my Sarge to attack the enemy troops.

I pick out one of the enemy soldiers, and exhale. The muscles in my throat tense as I inhale afterward, and a stinging pain rockets up my back. I use my left hand to scratch my back, and then swat the horsefly on my face away. It flies away with haste, only to land on a tropical leaf to my right, waiting to bite someone else.

I peer closer at the Vietcong soldier dead ahead of me, and stare him down like a wolf on a sheep. With the cover of vegetation, the soldier can’t see my squad and I, but that doesn’t mean that his peers don’t have a clue about our whereabouts.

Three weeks ago, one of my squadmates had gotten jumped by an enemy soldier that had hidden behind towers of bamboo rods taller than the Empire State Building, so I was cautious.

When the war started, I was quickly drafted into the Army, and sent to the frontlines near Dong Xoai in South Vietnam. During the first couple of years on the battlefront I had seen everything in the book: Gore, death, destruction, you name it. I had lost friend after friend after friend to violent battles, and I began to believe I wouldn’t make it out alive. Of course, I wouldn’t tell anyone that, especially my other squadmates and lower their morale, but that was the reality. I don’t expect to survive this war. No one does.

The itchiness near my temple where the horsefly had bitten me becomes unbearable, but I don’t dare to move a muscle. I continue to look forward at the enemy soldier, and wait for Sarge to tell us to strike. A couple of minutes into waiting, a strange young girl, around five years old, walks onto the scene wielding a small bamboo stick. The stick is sharp as a dagger, and looks like it could definitely draw blood if needed. The young girl walks up to the soldier I have my eyes on, and hugs his leg whilst having a ginormous grin on her face.

I look forward, bewildered, and my grip on the hilt of my machine gun loosens. The girl seems so happy, but I can’t imagine anyone being happy on a battlefield. Besides, being surrounded with dead bodies and fallen comrades isn’t the most soothing thing, but this girl seems to be ignoring it all. It’s almost as if she’s in the moment.

The itchiness near my temple immediately fades, and the sweat trickling down my skin becomes ice cold when I hear the sound of a helicopter in the distance. It’s the sound of whistling death. The sound gets louder and louder by the second, and I can guess that the helicopter is moving toward my squad’s position. My thoughts immediately center on the girl. Does she know what is coming?

The soldier that she had hugged immediately dives toward the ground, but the girl continues to stand upright, as if nothing had happened. A US helicopter comes into view, armed with machine guns, lights up the field with gunfire, and the girl crumples to the ground. Sarge shouts for us to fire, but I can’t budge. The rest of my squad leaps out from the cover of vegetation and engages the enemy soldiers, but I can’t move. The horsefly lands on my face once more and chomps down, but this time there is no pain. There is only grief. When I get a hold of myself, I run into the field, only to see the young girl lying face down on the grass.

I fall to my knees near her body, and drop my gun. My face becomes encased in tears, and I shout out in grief. Why couldn’t I do something? I knew I could’ve helped her! I look up into the sky, which is sprinkled with brownish-white clouds. The girl turns over, and my tears immediately halt in their tracks. I quickly lift her head from the ground, but I realize there's no chance for her survival. Warm blood secretes out of her mouth, and she looks directly at me. A frown forms upon her face, and my tears resume their trek down my cheeks. She begins to struggle for breath, but to no avail. In less than a minute, her gaze that had been directed toward me begins to direct itself to the area behind my body, and I know she’s dead.

I drop my head down, and wait for more tears to come. They don’t. Sarge lunges toward me in fury, and I don’t resist. He screams insults at me, and tells me that I’ll be demoted for not helping the rest of the squad, but I don’t care. This is the worst day of my life already. The only way you win this war? You’ve got to be the last one standing. 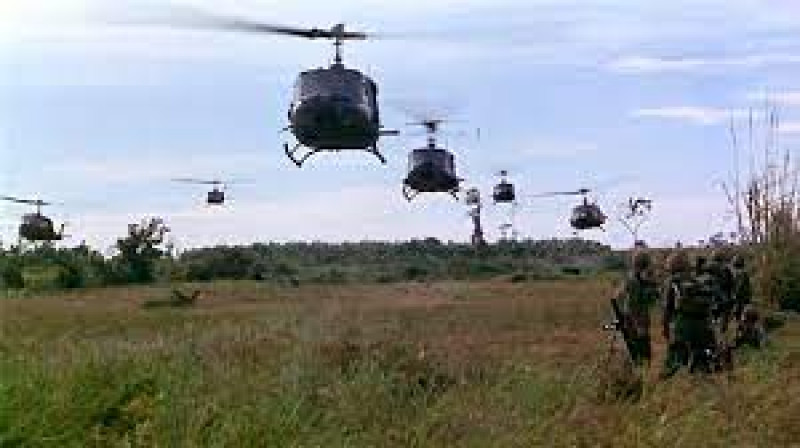 This piece takes place during the Vietnam War and potrays a message of anti-war.

Favorite Quote:
"You can be a victor without having victims and you can stand tall without standing on someone"

View profile
This is pitch-perfect and searing, this description, it truly is.