How the Corgi Lost his Tail- Retelling of a Welsh Myth

The faerie queen, Ilawen, a fierce warrior who loved to cause mischief, her bright auburn hair short and sticking straight up as if to replace wearing a red crown, her black eyes forever sparkling with puckish mischief and amusement. Actually, she was probably the daughter of Puck or something. Anyhow. Over her left eye was a sort of green patch on her skin as if in the shape of a sideways flame, the mark of a faerie. She was about 2 feet tall, with clothing made from stolen bits of twine and an odd mix of burlap and fine(though soiled) silk. On her feet were slippers made of mouse ears, the soft outside warming her feet, and the once waxy inside keeping a grip under her when she walked. She almost used the inside for her toes, but welsh winters could be cold and her toes must stay warm. She lived in a little cave just her size with little stolen trinkets she hoarded and lorded over other faeries just to see how far they would go. She had clear as glass dragonfly wings exploding from her back with tiny grey veins, on which she flew about the forest by day when her favorite mount was busy. She liked him, for he was sassy and mischievous as she. By night they'd go to farms and put knots in men's beards and hide milk pails, laughing merrily as they went. By day she pushed at her people with childish glee and flew through the forest at breakneck speeds, smashing bird eggs as she did.

The corgi, Gyr, a cute dog on short stumpy legs who herded by day and by night ran about under the weight of the faerie queen, talking back at every turn and laughing merrily. He had a sassy, mischievous spirit, a mouth as quick as his laughter, a playful spirit, and unequaled stubbornness. His short legs and orange and white fur, short and smooth, were utterly adorable, though he would never stand to be called cute, proud that he was. He was a fairly long dog, at least compared to his legs, but that didn't stop him running with speed to satisfy the queen. However, he was most proud of his lush, feathery long tail, his favorite feature of his entire, totally on fleek, appearance. Arrogant as he was, he believed the faerie queen served him and he could get away with anything. He also believed, fool that he was, that nothing in the world was greater than his magnificent tail and that nothing could touch it. However, sassy as he was, he was also loyal and loving.

One day, Gyr had had a long day with the sheep who had decided they were afraid of something and scattered. Gyr had to collect all of them and he was so exhausted as soon as he got to his corner of the barn, covered in such soft straw, he fell asleep instantly. Ilawen came in soon after and saw Gyr asleep. Well, she couldn't miss an opportunity like that. She found some back pepper in the house, a tiny amount that was being saved for a special occasion and would have been very expensive, and gleefully snatched it. She sprinkled it on Gyrs nose and it blended in perfectly. He woke up sneezing uncontrollably. She collapsed laughing. He got up, growling. “I'm not going tonight. I had a long day and I'm tired!” Ilawen was furious. She had been planning to steal paint and cover the face of the regional king with it to make him look like a clown, it was the only day the circus was in Pembrokeshire! And paint was rare and valuable in those days! This was unacceptable.

She stopped her foot. “You will come.” Gyr refused. She begged, pleaded, cried, bargained, cajoled, threatened, and threw a hissyfit, but stubborn, prideful Gyr refused. He sat down firmly and llawen couldn't move him. Eventually, she became so enraged she used her fae magic to stick his tail to the ground. Gyr yelped in fright. His precious tail! He jumped up and pulled and pulled, until it snapped clean off. That was the night he lost his tail and his pride. He mourned it and turned on Ilawen. He snarled at her “I will never again take you anywhere or speak to you again. You are a traitorous friend and i will never again speak to you, fae!” he whirled, and Ilawen stood, stunned, then she whirled as well, throwing his beautifully crafted saddle in the mud to rot. “Fine, be like that!” she spat and left, heart broken. She flew home to her cave, pride intact but her heart shattered. She had just lost her best friend and her favorite time of day. But she still had her pride and she refused to apologize. If he was going to shun her then let him, he'd come crawling back soon enough! See if she cared then! She furiously whipped away her tears. Meanwhile, Gyr turned back, humbled and sad. He had just lost his prized tail and his best friend. But he would never again speak to her after what she had done. Not if she wouldn't even apologize. He dragged his saddle away and hid it under a rock so as not to think about it, than curled up and slept to avoid the pain. That was the end of the corgis tail, his pride, and his friendship. 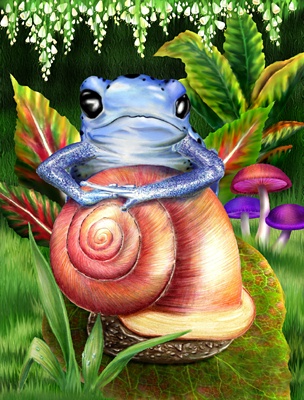 I didn't have to do any research for this, I'm very corgi obsessed. i rewrote and embellished it, but the names(i guess I did research them) are welsh, they mean merry and herding. this is a real welsh myth. his personality is pretty normal for a corgi, tho emphasised in areas best suited for the story, and corgis are neither prideful nor arragont. i know all kinds of things about corgis, maybe at some point ill compile it all. if your into corgis i wrote something else, a narrative thru a corgis eyes(in a brave act of heroism, sacrificing her leg and almost her life to save her owners). what do you think of the myth and my retelling?

(for contrast the original is basically a long time ago in wales the corgi was the favorite mount of the fairy queen, she rode him to make mischief. one night he was tired and refused, so after begging and pleading the fairy queen got fed up, stuck his tail to the ground, and he pulled it clean off)