Favorite Quote:
"If you shoot for the moon and miss, at least you'll land among the stars." - My stepfather, Aaron Loughlin

I watch from afar as the young boy with midnight hair tugs on his father's arm. The distance is too great for me to hear what he says, but the father, who is tall and has matching hair, smiles fondly at his son. I know that smile—I used to see it in the mirror.

I have to shake my head at the thought. I've become too attached to the emptiness to think such things, and I'm fine with that; things are easier that way.

The park is nearly vacant despite the rolling hills of sparkling white. It's the perfect weather for sledding, but this park is located too far away from any neighborhoods for parents to dare the ice and snow that had collected last night. The main road behind the wooden, icy bench I sit on is empty; the bus stop adjacent is a snowy skeleton.

The father is now pulling the boy up a small hill by the rope of his wooden sled, still smiling as he completed the tiresome task. I can see that the son is giggling, but no audible words come out because I'm still too far away.

I'll always be too far away.

I can get up and walk away—I probably look creepy sitting here, alone, watching.

But I'm still sitting there, frozen in time, hoping the world will someday let me catch up.

An hour passes, and the boy and his father leave, but I'm still waiting, begging for a whisper or laugh.

A second hour passes, and I leave to look elsewhere.

I don't recognize the man staring back at me. At first, I wonder if the owners of this place mistook the mirrors in the men's bathroom for glass windows, but I can see the stalls and urinals in the background.

This man's face is gaunt and pale; my face is not.

His brown hair is shoulder-length and graying; mine is cropped short and pure brown.

His beard is thick and gnarly; my wife makes me shave when my jawline starts to prickle her.

But the eyes are the most different. We both have the same color of eyes, this man in the mirror and I, but his blue eyes are frosty, blood-shot and smudged with purple underneath. Mine are healthy, gleaming and warm.

I don't know what it takes to make me realize as I stand there, staring at this man, that he is my reflection; that he is what I am now.

I exit the bathroom.

I wake to someone violently shrugging me from a dreamless sleep. "Sir, it's closing time—I need to ask you to leave," says a young, sweet voice.

My head is foggy and I feel ill. My limbs are foreign and heavy, as if I'd finally lost my control of them. I peel my eyes open, my lids sandpaper against my irises, to see a pretty, black-haired young woman staring down at me. Her eyes are gray. I know someone with gray eyes, but somehow, the ones staring at me now are completely different.

A monster with poisonous fangs wakes inside of me, its rage flooding my veins. But no matter how much I want to let it stay, it leaves an instant later, as if it had never been. I glance at the bottle in my hand—I want to crush it; I want to shatter it. I want to feel the glass cut into my hands, just to remind myself that I'm still capable of feeling. Hell, that I'm capable of something.

But my fingers don't move.

I thank the girl, who gives me a sad smile, and leave.

I vaguely remember purchasing a bus ticket from an old driver and slumping down in a seat in the back. My limbs are still numb and I feel like I've been trampled by an elephant, but I don't acknowledge it. It's easier to forget pain than to face it.

I fall asleep and dream of a beautiful beach, where I watch a woman and a young boy play in the waves. The woman's gray eyes meet mine, and she beckons me over with a thin hand. But just as I begin to move, the scene changes and there are great, metal beasts overhead, speeding faster and faster towards the beach. I try to call out to the woman and the boy, but they do not hear me. Instead, I helplessly watch as the Beasts of Death drop down, and the woman and the boy are lost in a sea of fire and blood.

Something cold and wet splashes my face—so like the cool saltwater spray against my body as I ran and ran...

I jerk awake as a sudden burst of energy ignites my useless body. I'm prepared, I'm ready to run to the woman and the boy, prepared to save them before the nightmare begins...

I'm sprawled in a bus seat, soaking wet. A teenage boy with messy black hair is running for the front of the bus, carrying a metal water bottle in his hand. Another boy, scrawny and red-haired, laughs from his seat a little further up than mine.

I think I'm screaming, and not because I'm angry—I'd have been thankful if I were, even though I don't deserve it. But I can't really tell because that hollow void inside is drowning out everything, causing the world to slow down. All I hear is laughter.

Did they laugh when they took everything from me?

Did they feel overjoyed when they turned me into what I am now?

How can anyone in this dull, empty world laugh after innocent blood was spilled into the sea?

I don't know, and I want answers no one can give me.

I run after the two boys, who had ordered the incompetent bus driver to stop. My head is still aching and a cut on my palm stings in my body far away—I must have thrown my bottle at them—but I still chase those I'm not sure I want to catch, even if it's in the name of justice, lest I'm reminded of the thing that my inner emptiness guards. I was too late then, but maybe I won't be now.

The bigger boy yells something at the bus driver, and they escape.

"Ye-idiot!"  I try to say to the driver—my head is still too fuzzy to form proper words—who apologizes and offers to let me off again.

But whatever had come over me in those brief moments is sucked from me by an invisible leech. Shaking my head, I turn back around.

Something crunches under my boots and I look down. The pieces of my glass bottle litters the floor, the shattered remains of myself and everything I knew. I sit down in the seat adjacent and stare at my bloody hand; it doesn't feel like my own.

They escaped, and I'm alone with the emptiness once more. Escaped without paying for their actions, without telling me why this has happened, why it had to be them ...

I shake my head and let the empty void consume me once more, knowing I may never come out of it this time.

But I'm fine with it. 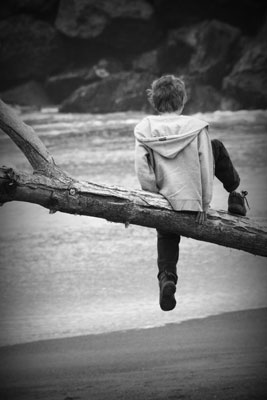 My name is Ellie Paige (my pen name), and I'm a 14-year-old aspiring author. "Fallen" is a Historical Fiction short story that takes place in the '40s. It came from the novel I'm currently writing about my great-grandfather during World War II, but I thought this original side character from that piece would make a nice little short story.

This is my first published work on Teen Ink, so I'm not really sure where it's going to go. However, if it's possible, I would appreciate any and all advice and comments you may have. I wish to improve as much as possible, as writing is very dear to me.