Arwen and Aragorn; Lord of the RIngs Fan Fiction

As Arwen woke up, she could see the light of the morning sun just beginning to crawl over the horizon. Any other day, Arwen would have started her day off slowly and without motivation, but today was unlike any other day. Today was the day that her beloved, Aragorn, would be returning to Rivendell after having been away for five years.

Aragorn, who was now twenty-seven years old, had been living disguised as Ranger while on his way to Gondor, as it was not discovered that he was the rightful heir. Arwen’s father, Lord Elrond had kept this from him for the first twenty-two years of his life to shield him from the darkness and from those who might try to kill him, however, Lord Elrond realized that the days when Aragorn would be king are fast approaching. He could not just stay in Rivendell until that day came.

Though it was incredibly painful for Aragorn to have to leave his melda, they both knew he had to. The morning that Aragorn left, they met together on the hill that was at the very edge of Rivendell and overlooked the expanse of Middle-Earth. Aragorn promised that he would always return to her and that as darkness was starting to creep over that land, he would always safeguard her. Arwen also made a promise to Aragorn. She bound herself to him, giving him her heart, which is something that could only ever be given once. They pledged their love for each other.

Though five years to an elf is like the blink of an eye, every morning waking up to realize that did not know if Aragorn was even still alive, or safe was torture. The five felt like five thousand. Finally, the word was received from Thrandriel that Aragorn was returning from Gondor and would be returning to Rivendell. This overjoyed Arwen.

Today was the day that Aragorn was to return to Rivendell. Arwen got dressed and went down to the hall to meet with her father. There had been concern sent throughout the area with rumors of Smaug, the dragon in the Misty Mountain, awakening after fifty years. She found him in conference with several other leaders of the army, discussing what is to be done with the matter. She decided that instead, she would walk through the gardens, the place where she had first met Aragorn.

While walking through row after row of trees, she thought to herself that she did not care if Aragorn did not return the same person he left, all she cared about was that he was here. However, thoughts crossed her mind of what if he changed so much that he lost his love for her. As soon as that thought crossed her mind, hundreds of others came flooding in.

Arwen came to the edge of the garden, she walked up the hill, the place where she pledged her love to Aragorn. As soon as Arwen’s worries came, she felt a sense of calm. She looked behind her to see Aragorn. He looked older, worn, but still had an abundance of life.

He ran to Arwen and kissed her and held her close. Then they just looked into each other’s eyes. Together, they walked back through the gardens and to the gazebo, where they sat, Aragorn with his head on Arwen’s lap, and speaking in Elvish regarding what had happened over the last five years. Aragorn spoke of Gondor and the Orcs. He had traveled for two years to Gondor, while on the way learning of the world. Then he stayed for a year in Gondor and then traveled another two years back to Rivendell. He spoke of the evils he s

“I wish we could just run off and live without a care of what is coming,” Arwen said to him.

Aragorn sat up, responded with a sigh, and with sadness in his eyes, said, “I talked to your father regarding that this morning. I asked for his approval for me to marry you. Arwen…he does not approve. I am unworthy of you. The only way to gain his approval is to become the King of Gondor. I do not know how that will ever happen. But I need to return to Gondor and will not return for a long time.”

“When will you be leaving again?’

Aragorn and Arwen spent the rest of the day together and talked about the future that looked far from sight. Though neither of them knew how long it would take before they saw each other again, they always knew they would one day. 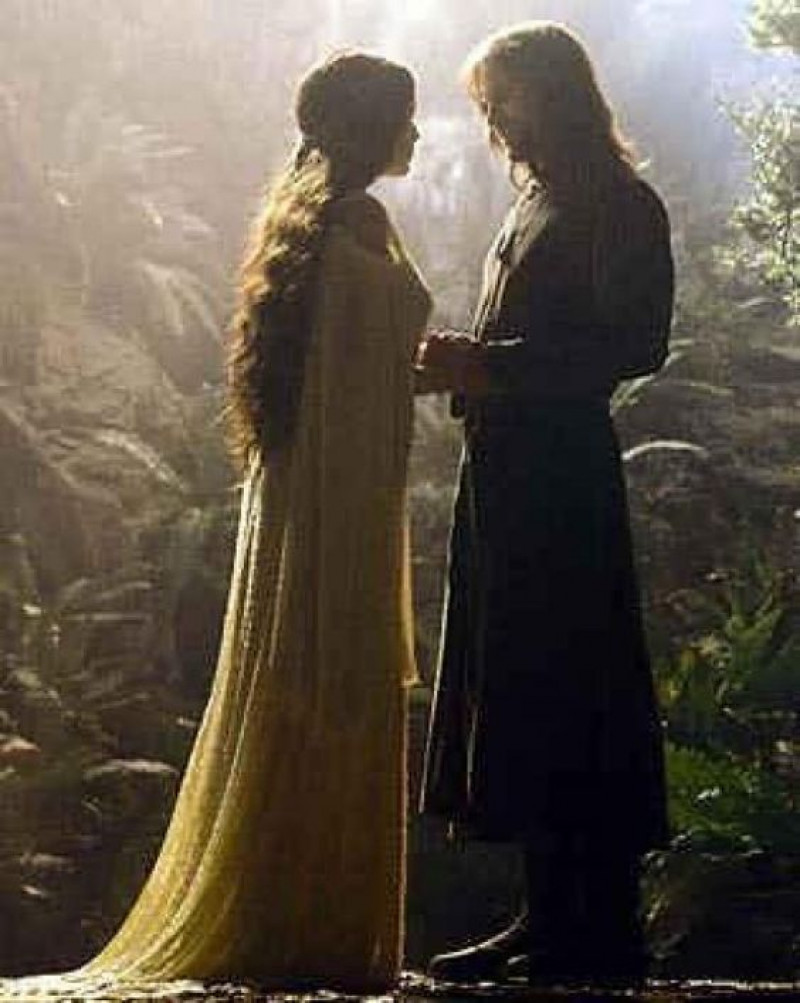 I love LOTR, and I was really interested in writing a piece that was an expancion on the characters, Arwen and Aragorn.

Favorite Quote:
"if i could give her a big does of 'be nice' then we'd all live happily ever after." -Stevie Rae, Chosen.

Favorite Quote:
"The dictionary is the only place where success comes before work."
- Anonymous

View profile
I love it! So accurate!