“I know, I’m sorry. I’ll try to be there by the fourth quarter.” I lied to his face...over the phone.
“Alright...I guess I’ll get to see you after at least.” Oh he was just so pitiful! I had to rush the end of the conversation so I wouldn’t blurt out that I’d be there to see him run on.

See, at first I had work. It was my first job...my third day. I couldn’t just ask off randomly...so I did something naughty. I lied to my boss.

“Hey Tram, it’s Laruen.” I said (also over the phone).
“Hello Lauren. What can I do for you?” She was a tiny Asian woman who could put you in your place in an instant.
“I have some unhappy news. I have a mandatory practice on Friday that I just found out about. So I was wondering if I could switch for some other day or something?”
“Oh sure! That’s fine.” Psh! And people think I can’t like. She let me switch my day so I worked on Tuesday and was free to go on Friday.

“Red...or blue? Blue...or red? Red...or-”
“Pick one!” Aryn cried. “Just pick one or the other.”
Bret’s team was blue and yellow. My team was red and black. Did I mention that we’re rivaling schools competing in the finals...against one another?
“One or the other.” She said again. Suddenly an amazing idea popped into my brain.
“What not both!?”

Now...I can’t drive...yet, but my birthday is close and I’ll get my license, but for now I required the help of Aryn...who can drive, but at the speed of smell it seems! It was only supposed to take a max of fifteen minutes to get there...it took twenty-five. But we got there right- like right as they ran on the field.

Even though he was all decked out in pads, I could still point him out. Number 44. Aryn and I sprinted to the line and screamed at him as he trudged by.
It was a hilarious tradition at his school, that all the jocks hold hands as they make their dramatic entrance. In the simplest of terms...the chain was broken the moment our eyes locked.
“Bret!” Joel felt lonely as Bret tore off his helmet and performed his first tackle on me...but I stayed on my feet.

“You told me you wouldn’t be here!” He had to yell over the crowd. They wanted to see why one of their starters broke rank...and if she was worth it, so they grouped around us.
“Well, I must have gotten off work and planned this down to the very last second!” I called back and showed him a huge smile. Oh! PDA PDA PDA! He kissed me so happily I almost didn’t stop t make him go play his game.

“GO! You’re going to get in trouble!” I involuntarily tore myself away from him. He looked like an upset puppy but quickly pushed his way back through the crowd to join back up with Joel.
They ran to catch up but my insane boyfriend opted to run backwards and yell at me.

“Who you gonna cheer for?” I laughed and unzipped my jacket then turned to flash him...with my shirt! Half blue, half red with yellow and black stripes.
“Both!” 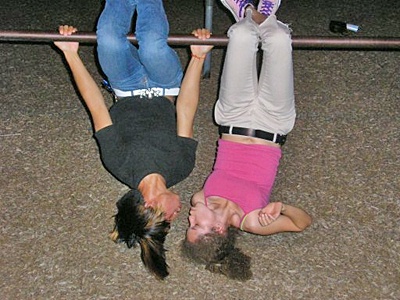 Favorite Quote:
"It's one of the few, real truths of comedy: You always take shots from folks who just don't get the joke." -The Joker, Batman: Mad Love