Favorite Quote:
"My ideas usually come not at my desk writing but in the midst of living."-Anais Nin

My best friend Fred wanted to invite me over to his house for dinner one night, but said it was a bad idea.
“Why?”I asked him.
“I’ll tell you,” he said, “But you have to promise not to tell anyone!”
“Fred,” I said, “Relax. We’ve been friends since the second grade. You know I won’t say anything.”
Fred eyed me skeptically but resumed to tell me his secret.
“Well,” he hesitated.
“Just spit it out dude, c’mon,” I said, trying to encourage him.
Fred inhaled deeply and closed his eyes.
“Geez, Fred, quit being such a sissy,” I told him, trying to assure him I wasn’t just bluffing.
“Okay,” he exhaled, “My whole family has a really bad case of Dinnerosis- it’s when people go crazy over food and act like animals during dinnertime. The scientist that diagnosed our case said it could last anywhere from twenty to thirty years.”
“Is it contagious?” I asked.
“No, but we’re not sure how it started,” he replied, “It might be genetic.”
“Do you think I could come over tonight and see what Dinnerosis looks like?”
Fred laughed, “If you’re brave, sure. Just be ready.”
I patted Fred on the back and assured him I wouldn’t judge him or his family of their rare illness, but it would be hard to forget what would happen that night- and it would be even harder not to laugh.
When I arrived at the Ellis’s family’s estate, the English family was as normal and proper as could be. There was an elaborate feast laid out on a long dining room table and as I sat down at the table with Fred, I wasn’t sure what to expect. It wasn’t until I began stabbing my fork into my salad that I noticed Fred and his family begin vigorously stabbing their forks violently into their salads too. Suddenly, Mr. and Mrs. Ellis started dumping salad dressing into their bare hands and then picked up their salad in handfuls. Fred and his little sister Meg started throwing spinach, gravy and chicken at each other. Gravy soaked spinach landed onto my plate. “Gross!” I thought. Then they all started pouring tomato juice on themselves and made grumbling noises like apes as they ate tubs of ice cream with their mouths. Meg threw pumpkin pie at my shirt and then dropped an expensive dish into the floor and it shattered into a million pieces. Then they quickly grabbed their chicken legs out of a pan like cavemen and made disgusting slurping noises as they ate it. “Disgusting!” I shouted. Macaroni and cheese was being tossed across the dinner table like a food fight. Pudding plopped onto the floor and Mrs. Ellis slipped and fell laughing. “Me the King of the World!” Mr. Ellis shouted while beating his chest like a Gorilla as he stood on top of the dining table. Orange juice spilled all over the table and floor, pie was being thrown at each other’s faces, Fred hid under the table eating crumbs off the floor, and Meg threw her cat into the punch bowl. The cat screeched and hissed and landed onto the mess of squashed pie, dumped salad dressing, spilled orange juice, and wet spinach. The cat looked like he was tossed into the dumpster at the back of a restaurant. “Poor cat!” I thought. I ducked when some hot, flying carrots came my way and hit Mr. Ellis, burning his face, and he yodeled in pain. Meg was laughing, Fred was yelling, Mr. Ellis was crying and slid on a fudge spilt floor, Mrs. Ellis was singing and still dumping ice cream onto her head, and cake fell from the ceiling and onto my head. After another chocolate covered banana hit my ear, I had had enough. I bolted out of the kitchen and up the stairs to the second floor of their mansion and hid in one of the bathrooms. They lived in a big house so I figured the bathroom on the second floor was the last place they’d look for me. I reached into my pocket for my cell phone and tried to call my parents but there was no reception. I was trapped in the bathroom and began hearing Fred yell after me, sounding like primitive speaking caveman. I panicked. What were they capable of doing while in this state of madness? I wasn’t about to wait and find out. I pulled back the shower curtain and luckily there was a tiny window I began to squeeze myself through. I heard the door knob begin to shake violently and Fred began violently pounding on it and screeching like a chimpanzee. The first floor roof was a long ways down, but I had no choice. I jumped down just in time before Fred opened the door. I wondered what the family must’ve thought when they heard the “therplunk” sound on the roof when I landed on it. When I looked up, I saw that it wasn’t Fred who had tried to chase me- but Mr. Ellis! And boy was he mad! He leaned sideways out the shower window and shook his fist, shouting, “Ooooo ett bach heeeaaaaaa!” I think he meant to say, “You get back here!” From that roof, I jumped back onto the ground and took one last look through their window and saw the family still throwing and digging and diving into their food. I ran as fast as I could back home and never returned for dinner. But Fred and I continued to be friends and he gave me a “I’m Sorry” card the next day that his whole family signed. I patted him on the back and said, “It’s okay, pal. It’s okay,” but I couldn’t help but laugh. Fred laughed too. 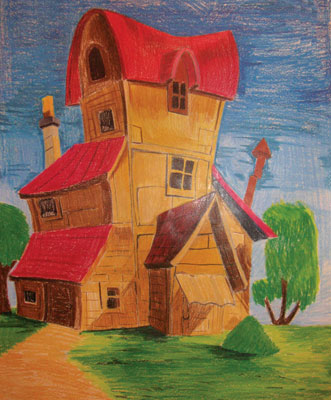 The author's comments:
Just another wacky story. First wrote this when I was 9.
Post a comment
Submit your own