Favorite Quote:
I write to be the characters that I'm not.

There were only six places set at the dinner table tonight. Seven guests coming. Pride first, head held high. Envy behind him, looking jealously at Pride’s new designer Armani suit. Gluttony followed behind Envy, complain how much he wanted dinner because “it smelled so good.” After him was Lust, looking so out of place in her scarlet red dress while all the others were wearing formal dinner suits. She was looking for ahead to Pride, who couldn’t help but wink back at her. After all, he was the best-looking guy in there, so why shouldn’t Lust like him? Anger shoved her from behind, annoyed that she was going so slow. Greed ran past Anger and looked straight at Lust’s neckline, admiring her gold necklace. So shiny. Bringing up the rear was Sloth, so slow and uninteresting. His clothes looked like he hadn’t changed in weeks, and as he dragged his feet past the other guest, they noticed his intolerable odor and gagged. Time to eat.

When they entered the dining hall, the room could not have been more perfect. The silverware was aligned to exact measurement; the muses playing their instruments softly, the first course already laid out on fine china plates. But one problem in the dining room. There were only six chairs. Pride rush to get his seat at the head of the table, grabbing Lust’s hand to have him sit right next to her. Greed sat across from Lust on the right side of Pride so he could look at her gleaming jewelry all night. Envy sat opposite of Pride at the other head of the table, not knowing who was really in charge. Gluttony was fighting with Anger over a chair, but Gluttony quickly sat down and Anger took the last seat by Greed. That left Sloth standing next to the table, his unkempt hair falling over his eyes sadly. “Now wait just a minute Sloth, I don’t think you should be the one to leave,” said Pride, standing up dignified, “There are plenty of other people who don’t deserve a seat at this fine dinner.” He looked warily around at the other guests. “Hey!” yelled Anger, “ I got here just as fairly as you did! Why should I leave? If anyone should leave, it’s you, you fancy, swanky, gold pocket watch carrying sack of turnips!” Envy stood up. “Yea,” he cried, “ I want that seat, and Anger wants you gone, so why should you get to stay?” Pride looked to Lust for help, but only to find that she was adjusting the padding of her breasts in her bra.

The arguing continued as the night wore on. Name-calling, food flying, and most of the time Pride wasn’t attentive, caught sneaking kisses on Lust. Anger was fighting with Greed when he tried to steal his gold ring, and it wasn’t even time for the main course. Sloth stood in the corner and occasionally moaned that “he didn’t need to be there, nobody liked him, and that he should just go home and watch TV.” Gluttony was trying to shove down as much food as possible in case they never made it to the main dish. Envy tried to take Pride’s chair out from under him while Lust was on top of Pride, kissing again and only getting worse by the minute. When the second course was served, the dining room was in such disarray that nobody could find his or her silverware or plates. Anger had smashed all the china in a fit of rage after yelling at Gluttony, and Greed had stolen all of the silverware while the others were fighting, even cutting himself accidently when he tried to put the knives in his coat pocket. By dessert, Pride and Lust were making passionate love on the carpeted floor under the table, Anger’s face was red and his ears were billowing smoke, Greed has taken most of the dining room and put it into his clothing, Gluttony had eaten everybody’s first, second, and third course, Envy had torn Pride’s chair to splinters and feathers, and Sloth had no doubt feel asleep, but it was hard to tell over the wild uncut bangs. The old grandfather clock in the hall stuck 11:00. Bong! Bong! Bong! Bong! Bong! Bong! Bong! Bong! Bong! Bong! Bong! The full moon was up, silver and pale, and with mild embarrassment, Pride and Lust put their clothes back on, Greed took out the silverware but kept Lust’ beautiful golden necklace which he took when she threw her clothes off in intense desire, Anger did some breathing exercises, Gluttony took some Pepto-Bismol, Envy put what was left of Pride’s chair back, and Sloth woke up and put on his filthy cap. As they left the dining room, Pride said,” Next week same time, shall we?” They walked out the door and into the chilly, silent night. 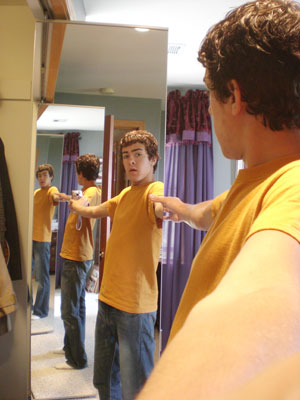