Favorite Quote:
"There is no elevator to success. You have to take the stairs." Anonymous

It had been a busy day for my seven year old, Thom. He had gone through his first day in the second grade, learning some and playing hard. By the time he had had arrived home by the school bus, he had grass stains on his jeans and a bit of leftover mud on his blue t-shirt, of which I assumed his teacher had not been able to get off.

As it happened, I was lucky to get to the front door before he did. My eyes were somehow instinctually inclined to look down at his pair of light-up sneakers, and like I had expected, there was still some dirt and mud on them. The rain from late last night must have caused the mulch on the playground area to turn into a muddy substance.

“Hey, buddy,” I said, trying the sweet approach, “would you mind leaving your shoes out here?”

“Why?” he asked, his little blue eyes staring up at me.

Ah, the why question. I knew what this was turning into almost immediately, soon enough to close the deal before he started to launch into the endless whys.

“Because they are dirty and mommy said so, so please sit down. I’ll even help you take them off if you want.” I smiled.

Before plopping down on the front porch, he turned to me and exclaimed, “No! I can do it myself!” He huffed and puffed wildly as he tore them off his feet, attempting to show some child-like independence. I had to give it to him though, as he wasn’t a kindergartner anymore.

“There,” he remarked as he set them down beside one of our outside rocking chairs. “I did it. Now can I go inside?”

With a faint smile on my face while I tried to stop myself from laughing, I nodded and let him past. After picking them up and going inside, I watched him put his school things in his room. That was when I noticed him taking off his glasses, scrutinizing them like something was not right.

Concerned, I quickly put his footwear on the first piece of hardwood floor I could find, and then went to his bedroom to ask what was amiss.

“Something’s wrong with my glasses…” he said before I could ask anything.

Once he gave them to me, I put them up to the light and inspected them. The only thing really wrong was that there were some smudges on the lenses that could cloud his vision some, but I knew that if they weren’t cleaned now it would just get worse. So, I took a small packet of glass cleaner wipes from my back pocket and got rid of the fingerprints and other things that had stained his vision before.

“They were just dirty, but now they’re clean again. What do you think, Thom?” I asked, handing them back over to him. How he replied was what surprised me.

“Can you make them go back to the way they were? It’s too clear now!” 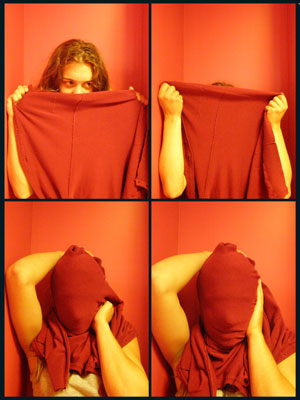 The author's comments:
I would like to share that there is an allusion in this, hint the title. But I will leave it up to you, the reader, to figure it out--I don't want to spoil it. :)
Post a comment
Submit your own