What a vile town, Philip Walker thought as he passedthe tacky wood sign that read "Welcome to Vienna: One Step Closerto Heaven."

To most passersby, Vienna, Tennessee seemed likea normal small town with a church, school and rest home, but Phil had alittle more insight - he had lived there from ages two to 13, toleratingthe painful charm of the town's 800 residents. To Phil, the town was afarce. In the pre-World War II days it was known as Grove Junction, andwas one of few towns that still hadn't felt the powerful hand ofindustry after the war. In 1953, things were so desperate that the townsought the construction of a meat-packing plant on its outskirts. Whenthe mayor learned the meat packers were considering his town for theirnew base of operations, he lobbied for a name change to show how serioushe was about the plant. One month later, the Vienna Sausage companybuilt their plant in New Jersey instead and the former Grove Junctionwas stuck with a name that reflected just how desperate things hadbecome.

It was the day before Thanksgiving and Phil was goinghome. He was headed south from Chicago to his parents' most recent placein Atlanta. The gas indicator light had cut on abruptly 15 miles ago.Phil hated the thought of it, but it seemed his feet would have to touchthe tainted asphalt of Vienna once more.

Phil wondered if thetown had changed much since his departure 14 years before. Entering hisold neighborhood, memories began to seep out. Rows upon rows of houseslooked as if they had been put together as a set of identical models. Hesaw the spot where the bus would pick up kids for school. There, Philhad met Vincent Bowman.

"Vincent," Phil whispered tohimself. "I wish I could meet him in an alley somewhere. Just

Vincent was the kidevery school is required to have one of, the child who used recess toenact his tyrannical regime upon smaller classmates. Vincent was the kidwho miraculously sprouted a mustache in sixth grade and the one eventeachers were a little afraid of.

Phil never forgot the day theymet. It was the beginning of second grade and Vincent's first day atschool. The class dared not gawk when Mrs. Randolph introduced him. Hisfiery red hair and freckled face could have been a target for teasing,but he was easily the tallest and heaviest kid in the class. No onewanted to find themselves hanging from their shoestrings on the monkeybars. Phil remembered the mist of pure malice in Vincent's cold browneyes.

Phil stayed as far away from Vincent as possible, andit wasn't until a few weeks into the year that Vince set his sights onlittle Phil Walker. But when he did, things got very bad, very fast. Itwasn't that Vincent singled him out; he rotated his tortured classmatesweekly, but Vincent poured a bucket of sand down his pants and one timehe knocked him unconscious with a dodge ball, single-handedly convertingan innocent children's game into a sadistic rite of the damned.

The kids never fought back against Vincent. To cope with theschoolyard abuse, they turned to the only outlet they could - namecalling. The names weren't creative, but they served their purpose. Liketraumatized POWs, they hung onto what little they had in hopes that itwould all be over soon. Phil's favorite taunt for Vincent was"Stinky Vincey." Vincent was one of those kids who paid littleattention to hygiene, evidenced by his yellowing teeth and pungentbreath. When Vincent began his punishment session, Phil's only hope wasto repeat "Stinky, Stinky Vincey" over and over like a healingmantra. It didn't stop the pain, but it made things a little easier.sweaty hands were clenching his steering wheel, and somehow he hadmanaged to get his car up to 60 m.p.h. in downtown Vienna. "I justneed gas," he said aloud. "Where in this dump is a gasPhil's class every year and his reign of terror barreled on. But as Philrecalled his life in Vienna, one story stood out as his biggest triumph- and failure.

It had rained for a week during the spring ofPhil's fourth grade, but with the first hint of sun, Mrs. Han-sen lookedpast the saturated ground and decided it was okay to have a shortrecess. Phil remembered how apprehensive he was going to the playground.Vincent had seemed particularly pugnacious that morning, and Phil knewit would be a long recess.

Once Phil made his way to the monkeybars, he could see Vincent's hulking figure over his shoulder. Vincentdidn't say anything, he just smiled. The smile shot under Phil's skin,and he was frozen in place. The bully picked up the stupefied Phil andtossed him in a mud puddle.

The huge splash wasn't the worstpart of the ordeal for Phil, rather it was what happened after. Theclothes he was wearing were completely ruined; the mud had found its waythrough every stitch. Mrs. Hansen took the soiled Phil to the office,where he was given clothes that had been there for years. When Philfinally walked back to class, he was wearing too-tight sweatpants and aloose, pink tee-shirt. The only one in the classroom who giggled wasVincent. In Philip Walker's mind, from then on, it was war.

Philset his fire engine-shaped alarm clock for 3:45 a.m. It was time forrevenge. When the piercing bell sounded, Phil slapped it to avoid wakinghis parents. He quietly made his way with a bag of water balloons to thekitchen. Water, Phil thought, would not be a sweet enough revenge, so hesearched the refrigerator. He pushed through the food - until he saw thecottage cheese. He hated the stuff, and it wasn't hard to picture itcaked on the energy-efficient vinyl siding of Vincent's house.

When Phil reached the garage and his bike he realized theimportance of what he was about to do. In his nine years, Phil had nevertaken a stand. He didn't care that he wouldn't stop Vincent from hisschoolyard ownership.

He stealthily made his way out of thegarage. His parents would be quick to punish him just for being outsideat this hour, not to mention the punishment if they discovered his plan.The wheels on the faithful bike whined as Phil began to accelerate. Hecould feel his heart like a metronome in his chest.

When he sawthe neat suburban structure before him, his heart leapt. He reached intohis duffel and squeezed the first balloon. He felt the unnaturalconsistency of the cottage cheese and hurled it at Vin-cent's frontdoor. It was a beautiful throw, and the shrapnel covered the streetnumber nailed on the front door. Phil's vengeance didn't stop there. Helaunched his entire bag full of the horrid dairy products and headedhome. He lay back down, but couldn't sleep, only relive in his mind whathe had done to Stinky.

The next day at school Phil was close tocomatose. He hadn't slept at all after his mission, but it was worth it.In his half-awake state he heard the teachers discussing that"Those teenagers should be taught a lesson," and wondering"Who would do such a thing to that man."

Evenwith only four hours of sleep, it didn't take Phil long to realize hehad cottage cheesed the wrong house. In the neighborhood Phil, Vincentand his pastor shared, the similar houses were easy to mix up. Phildecided, 10 hours too late, that his plan may have been a bit tooambitious.

Phil felt horrible. Not only had he enraged the town,but his revenge had failed miserably. He had built up the courage to acton his anger, and stand up for himself, but it was all moot - Stinkycame off without a scratch.

That Sunday in church the sermoncentered around lost youth. Some of the ladies cried; others just shooktheir heads. Phil couldn't sit still; he knew he was bound for hell.

For the next year, Phil's punishment from Vincent continued. Noother attempts to solve the problem were made, and Phil's family moved

In the distance Phil saw the pale yellowish lights of a 24-hourservice station. His little car, definitely on its last drop of gas,halted beside pump three. Noticing the "Prepay after dark"sign, Phil rustled some cash from his pocket and walked inside.

The shrill beeping of the alarm went off as the door closed. Thered-headed employee manning the register looked up and they nodded ingreeting. But as the cashier looked away Phil came to a suddenrealization. The hulkish frame. The blinding red hair. And as if heneeded any more assurance, Phil could make out that the nametag indeedsaid "Vince."

Phil paced the aisles, pretending tolook at the candy bars. The enormity of the situation was beginning todawn on him. All kinds of Poe-esque fantasies ran through his mind. Dankcasks and telltale hearts flashed before his eyes. He'd waited more thana decade for this, and he wanted to make it good.

In the farcorner, the microwave and hot-dog roller were surrounded by plasticutensils, which Phil rushed to investigate. He grabbed a plastic knifeand strolled over to the refrigerators to get a bottle of soda.

Halfway to the register, Phil looked at his tight grip on theplastic knife. He realized his plan might be a bit too ambitious. Hedropped the utensil on the dirty floor and walked to the cashier.Although he knew it was impossible, Phil thought he could smellVincent's hot breath oozing from his flaring nostrils.

WhenVincent rang up the gas and drink, it dawned on Phil that his elementaryschool torturer didn't even recognize him. After all of it, the punches,the torture ... He doesn't remember me, Phil thought.

BeforeVincent read the total, Phil laid a package of mints in front of thecashier.

"That will be $17.55," Vincent said. Phillaid down a wad of cash, picked up his drink and walked out. Heapproached the door and could hear Vincent muttering almostimperceptibly.

"Sir, you left your breath mints,"Vincent said as he held them up and shook them.

Phil slowlyturned and looked at the mints dancing before his eyes.

Then helooked back, smiled and said, "No, Stinky, those are for you." 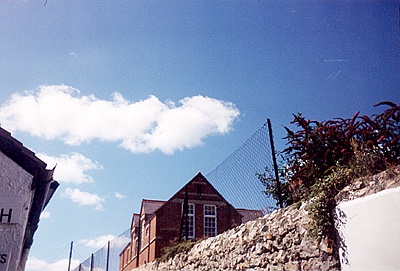