I Dare You | Teen Ink

I Dare You MAG

"No way," Jack replied."There's no way in heck I'm going in there."

"No, I just think it's stupid, that'sall," Jack replied, even though he was more scared than everbefore.

"Dude, if you don't go in there I'm going to tell Meganyou're a chickenbutt," Steven retorted.

"Here, take mine," Steven said as he tossed itat Jack. Jack walked toward the old building with disgust. Sweat formed on hisbrow and under his arms as the rumors he had heard came to mind. That reallydidn't help. He knew if he didn't go through with the dare, he would never hearthe end of it from Steven; if Megan found out it would be even worse. Heapproached the door; as he reached for the knob his face went white. If therumors were true he would never be seen again. He waved to Steven as he passedthrough the door. It was the last time he ever saw daylight.

The old doorslammed behind him, sealing off any possible escape. Jack turned on theflashlight, but as he looked up he immediately wished he had remained indarkness. He was beyond fear. The walls were pure white, as if they had beenpainted with some sort of super paint just minutes before. Then the walls wentblack and the flashlight was of no use, as if the walls were a black hole takingin all light. Then Jack was nothing.

"No way," Karlreplied "There's no way in heck I'm going in there."

"No, I just think it's stupid, that'sall," Karl said, even though he was more scared than everbefore.

"If you don't I'm gonna tell Jenny when school starts,"Lee retorted. There was no way Karl wanted to start the new school year withscaredy-cat jokes thrown at him. He couldn't live if Jenny laughed athim.

"No, don't do that, I'll go. Just give me a minute to get mythings together," Karl said. "What's so important about this old placeanyway? It doesn't look that scary."

"He was a lot like you," Lee began."He went into this building a long time ago and never came out. Thetownspeople said they could hear him screaming; if you listen closely you canprobably hear him now, screaming in agony."

"And this issupposed to make me want to go in there?" Karl asked with a paleface.

"It's either that or be known as Karl the Chicken Head for therest of your life!" Lee exclaimed with devilish delight.

"Ican't believe I'm doing this. I'm only going in for a second, then I'm going tocome right out again."

"That's all I ask," Lee replied,content. Karl walked toward the building, the pit in his stomach growing withevery step he took. He suddenly wished he had backed out of this stupid bet, buthe knew it was too late. If he ducked out now, everyone would make fun of himforever, including Jenny. He couldn't let that happen. Lee was just making allthat stuff up about Jack and the screaming, wasn't he? Karl knew deep in hisheart, however, that Lee was telling the truth.

The building was in frontof him. Rumors had been spread about this place, rumors of alien abductions andthe experiments they did on humans who wandered in. He reached for the door andhis stomach sank. The knob was warm, like someone had been holding it. That wasimpossible; Karl and Lee had been standing by the building for half an hour.Regardless, the knob was warm and there was nothing he could do about it. Karlturned the handle. It turned too easily for such an old building; the door didn'teven squeak.

Beyond the door it seemed like there was nothing. Just black.As Karl entered, the door slammed shut with a vengeance. That's when theunimaginable happened. The walls went pure white, like a new piece of paper, asif you could keep walking through the walls into all that nothingness. Then thesounds came, the screeches worse than fingernails on a chalkboard, screams ofagony and pain that definitely were not human. At that point the walls went pitchblack. Then, Karl was nothing. 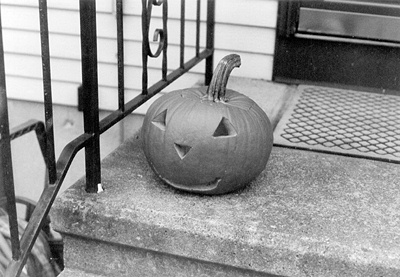 Favorite Quote:
"Say what you think and think what you want. Because the ones who mind don't matter, and the ones who matter, don't mind." ~Dr.Suess
"Every artist was once an amateur."

Favorite Quote:
"The only way of finding the limits of the possible is by going beyond them into the impossible."
~ Arthur C. Clarke
"Better to remain silent and thought a fool then to speak and remove all doubt." ~Abraham Lincoln

View profile
Superb!!!! That was great! I'm usually not one for scary stories, but I loved it!! I liked how in the begining you used the same lines (between the astrices) and changed the names! Keep on writing! ;D