I wasthe only person Aunt Ruth talked to about her cancer. She said it would be oursecret, and she wanted me to know because I was her favorite niece. I think itwas because she was afraid the other family members would look at herdifferently. I just sat and listened, not telling her what to do or how to liveher life.

Summer was my favorite time of year because I always got to stayat Aunt Ruth's house for four weeks. I remember sitting in my family's old grayvan on the trip to South Carolina, giddy with visions of my arrival. At herdriveway I would always roll down the window and stick my head out to look, mycurly blond hair quickly becoming frizzy in the humid air. Sure enough, Aunt Ruthwould be on the white wrap-around porch of her plantation home. She would remainseated in her wicker rocking chair, pretending not to see the car kick up cloudsof dust from the parched earth of the driveway. Then, when I couldn't stand itanymore, she would languidly turn her head, take off her reading glasses and wavecalmly, barely flicking her wrist.

Ruth was thin and blond like me, butwith clear blue eyes instead of the brown that had inspired my mother to name meHazel. Her skin was always slightly bronzed from the Southern weather, and shelooked younger than her forty-some years, with the exception of a few wrinklesaround her mouth which she referred to as laugh lines. She lived alone, off aninheritance from her parents, and loved the freedom to do her favorite things:gardening, knitting and, most of all, talking. She was the kind who just neededsimple things to be happy. I often wondered how she lived without television, airconditioning, a microwave or other technologies I take for granted.

Oncemy parents left, she'd bring out a glass pitcher of her lemonade and we'd stayout on the porch to catch up. I'd tell her about school, and as I grew older,about relationships with friends or a boy. She always spoke with a slight drawlthat was almost musical, keeping me well-informed about friends in South CarolinaI hadn't seen for a year. After what seemed like minutes but were actually hours,she'd take my suitcases up to my room. There, she'd always have pink azaleas, myfavorite, on the mirrored dresser. It was the same every year, and I had becomevery attached to the routine.

The last summer I stayed at Aunt Ruth'shouse, I was 15. One afternoon we were working together in the garden as we oftendid. Ruth had found me on the stone bench under the magnolia tree strugglingthrough A Tale of Two Cities. She had a tray with glasses of fresh-squeezedorange juice, two small spades and two pairs of gardening gloves. She was wearinga checkered sundress and a huge straw hat that kept the sun off herface.

"I've come to rescue you from utter boredom," she said,laughing and handing me one of the glasses. I always loved the way she laughed.She would start out with this little giggle, then her head would tilt back andshe would open her mouth wide in a smile, as a melodious chuckleescaped.

"Hey, Aunt Ruth. I see that you might need a little helpwith the weeding," I answered, grinning, taking her hint.

"Youread my mind, sweetie-pie. Here's a shovel." She tossed one at me, and Icaught it by the handle. "An' just 'cause I love you, Hazel, you can workwith the azaleas," she added.

The fact that she knew me so well mademe smile. I never really worked when I sat by the azaleas. Aunt Ruth had so manythat I could just lie on my back in the grass and look up at the colorful bushes.I'd always pick some flowers and have Aunt Ruth braid my hair with them. I'dintermittently pick a weed or two just to humor her.

I knelt in the thickgrass around the flowers, searching for dandelions or other garden pests. Themidday sun was still high in the sky, and on this cloudless day I could smell itsheat in the air. I ignored the sweat trickling down my neck and instead thoughtof the tan I'd have by the end of the day. I felt a prickle on my hand andbrushed off a big black ant. As always, Aunt Ruth was perturbed by the silenceand began to talk.

"Hazel, you know that little stone angel?"she asked. She was referring to a small, cupid-like winged statue that stoodaffixed to the garden bench.

"Of course," I replied. "Youalways used to say it was my guardian angel."

"That's right. Sothat's why you always come here to read an' do your work. I grew up in thishouse, you know, an' my mamma told me the same thing. I was very much like you asa child."

The rust-colored flecks in her blue eyes flared up and Iknew she was thinking of her childhood. I found it very easy to read Aunt Ruth'sfacial expressions. She waited longer than usual to continue, and the silenceseemed awkward.

"Hazel, sweetie," she said, seeming to strugglea little as she cleared her throat. "Nobody knows this, but I went an' sawthe doctor yesterday, an' he said I have a tumor." She wouldn't keep hereyes on me. I was shocked.

"What do you mean, Ruth? Like ...cancer?" I stuttered, trying to force the words out of my mouth.

"That's what he said," she replied, seemingly more calm now that shehad revealed the news. "An' he said there really couldn't be nothin' doneabout it, that I might as well just enjoy myself this summer. That's why I wantedto tell you, so we can have a lot of fun together whilst you stay." Ruthnever was one to get hung up on things, even when they were thisserious.

"So, Hazel," she continued, "who might your loveinterest be this summer?" Aunt Ruth was the queen of switching conversationtopics. It was obvious that she wanted to get the issue out in the open butdidn't want to dwell on it, and I wasn't going to let my fears become hers aswell.

I found myself spending more time with Aunt Ruth that summer; Iwasn't as interested in seeing my old friends. We'd go out, just the two of us,on hot evenings to the ice cream parlor and walk the streets, desperately tryingto lick the melting ice cream from the cones before it became a sticky mess onour hands. We even went to the beach a few times, and she'd bring a huge raftshaped like an alligator so we could jump into the water screaming only to comeout minutes later, running to our blankets. We'd stuff ourselves with food andlaugh loudly, like we were the only two people on earth.

When my parentspicked me up, I cried the entire way home. I wouldn't tell them what was wrong,so they just assumed I was already missing Aunt Ruth's house - and in a way, theywere right.

"Call me next week, you hear?" were Ruth's lastwords as we drove down the driveway, me with my head out the window looking backuntil Ruth disappeared around the turn onto the main road.

That winterI got a call at school. Ruth had died. I had expected it because our phoneconversations had gotten shorter and shorter as she became weak from her illness.I smiled a bittersweet smile as I learned Ruth had passed away on the porchrocking chair. I could picture her there, knitting on summer nights after dinnerwhen it was too hot to sit inside. I also like to believe she was thinking of howshe waited for me every summer on that same chair.

It was strange; Ididn't cry at her funeral, I just felt numb and empty. I almost felt guilty fornot telling anyone about Ruth's cancer. I had never been to South Carolina in thewinter, and it seemed cold and unfamiliar without my azaleas waiting or the soundof Aunt Ruth's voice. At her grave the rain fell in huge droplets; I was relievedbecause that made it look like I was crying and everyone else was relievedbecause their tears looked like rain. Black umbrellas blanketed the crowd, whichmade me angry because I wanted to see the storm. Aunt Ruth and I used to stay uplate, curled under a blanket on stormy nights to watch the lightning.

Ireturned the next summer for a week but stayed in a hotel. Everyone thought itwas a bad idea, but I didn't listen. I visited the now-empty house. I didn't goinside, just straight to the garden to do some work. That's what Ruth would'vewanted. I brought two azalea plants - it was funny how I always remembered tobring things to the garden in pairs. I planted one in the bed with the otherbushes and took the other to the cemetery.

The June air was again warmand familiar as I drove home in the faded blue pickup truck - windows open, ofcourse. I had a little stone angel key chain hanging from my rear-view mirror anda pink azalea in my braided hair. 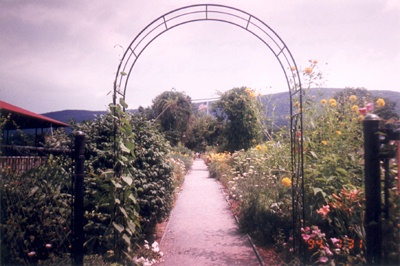