I dont know yet, just the beginning of the story | Teen Ink

I dont know yet, just the beginning of the story

“Sit down!”, Mrs. James shouted for the fifth time. Matt looked up at her and grudgingly walked to his seat. All morning he’d been feeling anxious, but unable to figure out why. He couldn’t take it anymore, he got up and sprinted towards the door, then he heard the scream…
Jane woke up at 6 this morning and hated herself for it. Why did she decide to look cute this morning? She curled her hair, did her makeup, changed her outfit 5 times the and now wishes she was wearing sweats and tennis shoes. When Matt picked up this morning she could tell he was jittery, he couldn’t stop shaking. When she opened the car door he looked at her and then did a double take, she pretended to not notice but couldn’t stop smiling. She had moved next door to him only two weeks ago. They met in the most peculiar way, on top of a roof when…suddenly her thoughts were interrupted by a blood curdling scream.
Gina hated school, nothing exciting ever happened. She made stories up in her head to make class go by faster. She’s been doing this as long as she can remember, but recently decided to start writing them down, one story she’d been working on involved class getting interrupted by an intruder on campus. She’s sitting in Mr. Clarke’s 4th period math class when a man holding a gun bursts in the classroom; everyone hits the floor and crawls towards the front of the room. A bell suddenly tore her away from her story, “The lunch truck is not coming today.” the secretary said over the loud speaker. Everyone threw themselves to the floor and started crawling towards the front of the room…Gina gasped, “It can’t be!” she practically shouted “That’s the intruder on campus code!” The familiar scene started to unfold right before her eyes. Everything finally made sense, she had to tell someone, she to… “Oh my god”, she screamed as realization hit her, she had to find someone, anyone before she………and then a sound that did not seem humanly possible flooded from her mouth.
Matt ripped open door, not caring if he got shot and ran towards Mr. Clarke’s room. One scream, he never realized how much one scream could terrify a person. He knew before he got there, he didn’t know how but he knew. Gina was lying on the floor blood pouring from the gunshot wound in her chest. He sprinted towards her and gathered her up in his arms. She wasn’t breathing; he yelled for 911 and told her lifeless body she was going to be ok. He grabbed her and sobbed, vowing never to let go. His twin sister had just died.
Jane saw it happen. She saw the man open the door and walk in. At first she thought it was a security guard, but security guards don’t carry machine guns. She grabbed Gina who looked terrified and threw her to the ground. Gina looked like she was about to say something, she clutched Jane to make sure that she heard her. “You have to listen to me Jane, I am going to die, you need to get my d-….” At that moment a blast the sound of a rocket exploded right by Jane’s ear, and Gina fell to the floor, dead.
Interesting. That was the only thing going through Gina’s head. Dying did not feel like she thought it would, it was a new feeling, not pain, but definitely uncomfortable. She couldn’t hear anything, but she could see everything. Matt hugging her dead body, Jane rocking back and forth in the corner, she tried to yell but knew it would be useless. She was dead, but not be allowed to move on. She was stuck on earth, unable to hear or be heard. She did not know why she was being held back, but she knew it wasn’t good. At that exact moment Gina saw something even more terrifying then the man that killed her, she saw her body start to move, but she wasn’t in it. 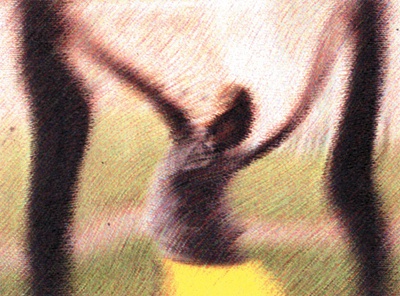 The author's comments:
Please be honest if it's no good, it's weird I know :) but I hope you enjoy it!
Post a comment
Submit your own