“Why can’t you hold me like you used to?” The question heavily sunk in the air.

I could feel his eyes look down into my head, his sent melted into mine. They all stared at me but all I could see was you. I couldn’t comprehend or read the atmosphere around us. Complicated fuzziness with a hint of regret.

“You’re overthinking your feelings” His voice was smoother than a babbling brook. “I don’t love you” He ran his hands through my hair “I’m in love with someone else…”

I sat up from his arms “I know, I just thought that maybe…” He cut me off

“That my feelings would change? You know I’m in love with my mother, I would kill to be with her.” My body shivered just hearing it aloud, even though I knew it was true.

“Why? I was first, it was you and me, it has always been you and me.” I could feel the tears cloud my eyes.

The coffee was getting cold and the air was moist, heavy lighting sunk in from the windows. “I think you should just go” I said to my ceiling and got off the couch and scurried up the stairs.

That was the last time I saw him, my boyfriend. His name was Jack. For the most part he was an average teenage boy. Lacrosse team, smart straight A student, captain of the student connection club, star baseball player. He wore dark blue rectangle glasses highlighting his green eyes. He stood tall at 6’2” with his thin lips and natural tan skin.

Jack seemed like a normal compassionate guy. That’s exactly what I thought the first time I met him. We got to know each other, fall in love, all the cheesy overdramatic summer romance. That was before I started to notice things, I should’ve seen these things. The late nights of just us and his mom, he would tell me to go home without a reason. Whenever his dad was gone on a business trip, which was often, he wanted to be alone with his mom. He was an only child and his dad was never around, when his dad was around he was always an ass. I didn’t blame him for being attached to his mom, she was all he had.

July 22nd 5:38am, Jack was arrested for man slaughter, his dad had hit his mom so hard she started to bleed, in the middle of a drunken fight. Something in Jack just snapped. He went insane and cracked 4 of his dad’s ribs with his baseball bat and stabbed him 7 times in the face through the brain. His mom just stared in horror, wet tears stained upon her cheeks and smeared makeup. That’s when he told her that he loved her, more than just his mother.

As punishment every night for weeks at a time I wouldn’t be able to sleep. I would just lie awake wondering where the time would go. Whenever I would manage to rest my eyes I would be placed his his eyes at the time of the murder. The cold night, the crackling fire wood in the background of the shouting in the kitchen. Dishes shattering, arguing, the sound of his mother’s whales and his father’s booming overpowering hollers. The crash of a bottle onto his mother’s skin and her screams for him to stop. The hot white flashes visions of me as Jack getting onto my feet and tumbling into the kitchen. Hearing my own heartbeat in my ears pound louder and louder. His hands as mine trembling over the handle of the baseball bat. Howling louder than everything to leave my mother alone and the fierce hard contact of a stomach and a bat. The yelling and the contact of my numbing hands and the knife, jabbing into his bloody pale face.

Waking up panting, running my sweaty hands through my dry hair trying to calm down. I trip over to my window, before this would calm me down trying to get some fresh night air. Handprints, all I see is handprints, smeared all over my window but this is the thing that gets me, the handprints… they’re on the outer side of my bedroom window that’s up two flights of stairs. 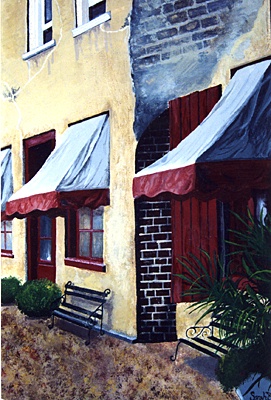