I can never get around that sickening moment. I couldn’t, or rather wouldn’t take it all in. Tears began to stroll down my rosy cheeks. There was one thing I could do, and it required me to run. My legs turned around and soon I was running, how I knew I was running? One thing was that they burned with fascination as I ran through the woods. I kept running until I came across the sacred spot. I crouched down and sat in my usual spot. All the tears burned through before I could stop it from flowing out. I lifted my head and saw the stars. They were beautiful this year round. I let out a huge sigh, this moment was too mixed that I couldn’t figure out the next few parts. A large hand crept to my face and held me tight. All I could see were the stars and then everything went black.
_____    5 Hours Earlier                             _____

“ Dad I told you everything is fine. Homework is done and i’m going to be great.” I said with a little giggle. I was the procrastinating queen so dad refuses to let me do anything until everything is done. I couldn’t help it though, I got distracted ALL the time.

“Yes pumpkin?” He said with a humorous voice that always made me laugh.

“Toss me a cold beverage please.” I couldn’t help but laugh at my dads NBA pro “skills”. It wasn’t long before he laughed too, after of course tossing the cold soda to my now cold fingers. He finished making lunch for me and I was off.

“ Be home by seven please.” he told me while I was leaning to kiss him goodbye.

“You got it mister NBA pro athlete.” I had stuck out my tongue and made a weird face that won me his smile. The autumn breeze had hit me with a SMACK as I opened the front door. I walked towards my car, when I saw something strange. I don’t own a car, first of all. Second, OMG I HAVE A NEW CAR HOLY CRAP. I squealed and jumped up and down. I turned my head to see my dad smiling while drinking a tall glass of coffee.  I had no choice but to test this new baby out.
_____________   5 hours later   ________________

I watched as they took him into custody.  I reached my hand towards him.

“I don’t want to lose you” I whispered. He turned his head to look at me. There was so much sadness that I turned my head, only to look back. It was too late. He took the shame walk and nodded his head in a slow motion.

*Gasp* I sat up and clutched my hand to my chest. I was breathing heavily. While catching my breath, I noticed that I was in what seemed like a prison cell.

“ HELP!!!!!!!!!”I shouted, even though shouting made my throat hurt a lot more than the chair i was sitting on. I had to control my emotions and calm down before I have a huge tantrum along with not a single crap to give to the people here. This was not a prison cell, or a mental institute, I was in custody and somewhat kidnapped.

“ Why did I go to the sacred spot in the first place?! That was such a stupid idea. UHHH I need to escape from here. THUMP. THUMP. Heavy footsteps came towards my door. I lied down and waited until he/she left. I had thought of a plan in order to survive wherever I may be. First was to not have any arguments with anyone here. Also to not be  rude whatsoever. Be nice and respectful so I wouldn’t risk my life here. I have a large family who are very, you know, crazy and not good people. Anyways my plan is to have as many friends here as possible to find a way  out of this place.

“Hey you wake up.”  a low voice said to me. He grabbed my arm and pulled me towards him. He leaned forward and whispered “I need to explain something to you.” I had a very good feeling he was drunk from all the booze I had just smelled when he told me that. I followed him to a even darker room. I reached out and sat in the chair below me. I raised my chin and told him:
“ What is it that you may need from me.” I wanted to stay strong, that was the only way out. My ticket to freedom, so I laid back with the sassiness I may have. I extended my arm out and searched for an object that was large enough to hit the whacko in the head or something. I had only let him take my arm again.
`“uh uh uh. No you don’t want to do that.” he said giddily. Then he threw me. It was just so coincidently a wall where I was headed and so when he slammed me against it, and I swear to my grave I heard almost all the bones in my body crack or snap.

“listen to me you little peasant, you are going to answer my questions whether you like it or not.” he shouted at me. I gasped for air, my hands flying towards my throat. My feet kicked the air and I was struggling. A tear went down my cheek, this is what dying feels like. Wasn’t long before I saw the stars yet again and went limp.

“Hey girl, wake up. C’mon please mate we need you to survive this.” a voice said. I flutter my eyes open and saw a tall male standing above me. I got scared and tried to run.

“ Don’t worry, I am not going to hurt you” He said as he took a seat at my side. He lifted my chin and looked at my throat. His eye’s widened with horror.

“What?” I croaked. I hope I didn’t look bad because I noticed how gorgeous this guys was.

“ He really hurt ya didn’t he? I hope you are all right.” his eyes made my stomach do summersaults a thousand times. He grinned and looked at his feet and played with his thumbs.

“It’s that bad, isn’t it? Where are we?” I asked. He stood up once again and told me everything. I blushed as he admitted that he was “spying” on me ever since I came to this place. He saw I blushed and then started blushing as well. Lucky me. Even though we are stuck here, we can face this together. I took his hand and we ran down the empty hall. I saw the exit sign and my heart flipped. I faced him and noticed he was staring at me for a while. I sighed and opened the door. Outside were about a hundred police cars and the ambulance. Reporters came toward us saying a bunch of questions about this moment. I couldn’t think about anything but the stars, they were beautiful as they always are. This time I stayed awake to see them. Cherish them with all my heart. I squeezed the guys hand and let out a breath. I was free. 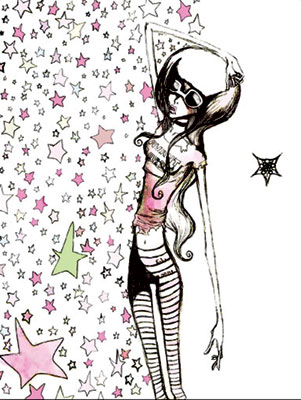 I wrote this for an english assignment, but later I decided to revise and edit it so I could share it with others. I hope that anyone who reads this short story enjoys it!