A Test of Faith | Teen Ink

A Test of Faith MAG

Confusion and disbelief flooded my mind as my heart clamored in my chest, threatening to burst. The angel faces glared down from the stained glass windows in disapproval. I wanted to hide under a rock as students around me began to giggle. The nun's stinging words echoed in my ears: “You're going to Hell.”

In the Catholic faith, it was my obligation to go through the sacrament of Confirmation. My mother enrolled me in the classes, but I still had my doubts. On Sundays, after a long mass, I walked across the road to Sunday school where I listened to the nuns (whose faces looked like they could use another de-wrinkle cycle in the dryer) talk about what I should believe. Without paying much attention, I nodded when told. After a few weeks, I realized that the scary-looking nuns were pushing their beliefs onto me. I thought it was enough to just ignore the parts I disagreed with. One day, though, I just couldn't nod my head in rhythm with everyone else.

So, I challenged the nuns with what I thought was a decent question, and I immediately become different from the other students in the room.

After I spoke, I slumped back in my chair from the embarrassment of being in the spotlight. Instead of answering me, one nun stomped to my side, disgust etched into her face, and repeatedly spat at me, “You are going to Hell for that!”

I swallowed hard as I stuttered my ­defense. How could I be sent into the farthest pits of Hell for something I believed? I tried to use science and reason to support my beliefs, but the nun shook her head, having heard enough of my pathetic reasoning. My classmates didn't want to be cursed as well, so they agreed with the nun, their faces puppet masks that wouldn't stop grinning at my mistake. That night I begged my mother to let me drop out of this painful religious obligation. I let the salty drops of anguish roll down my cheeks as I pleaded for an answer, to be told the direction I should take. No answer ever came.

This battle still hasn't ended. My mother never let me drop the class, and I hid in the confession booth while everyone else took their vow. Every day I have to remind myself to hold on to what I believe, despite the students who ask me to touch a Bible, thinking I'll burst into flames. My mother still forces me with her scowl to say long prayers before every meal. I don't think I will be free of this until I am on my own. I may have said no to being confirmed as a Catholic, but the battle to stand by my beliefs is ongoing. 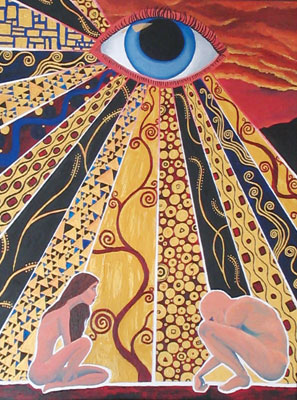 The author's comments:
So far this has helped me get into all my colleges that I have applied to.
Post a comment
Submit your own