An opening in the branches gave way to a breath-taking view: strong rocks littered with trees rising out of the side of turquoise water and…my eyes widened in surprise, people! People scaling the cliffs! Directly in my view was a man, testing the rocks carefully before he stepped upwards. He never once looked down to see how far he was above the treetops.

My family and I watched with fascination. The man was in his twenties, an age associated with the search for adrenaline rushes. I see contemplation and temptation in my father’s face, but I believe fear is keeping him grounded. After all, he is twice past the adrenaline zone.

This was during our annual camping trip in 2008 at Bruce Peninsula. The cliff-climbers were a local attraction and we were curious, so we started on a trail. Surprisingly, as we mounted higher, we met more people. At one point, we saw two women sitting at the edge of a cliff, chatting as if they were sitting in a cafe instead of inches away from hundreds of meters of emptiness. My legs tremored at the sight. How could they sit so calmly?

After hours of hiking, we finally ended up at the Lion’s Head Lookout Point where we could see the surrounding cliffs. I sat down on a humongous boulder- because my legs would certainly shake if I stood, and admired the ocean with its many shades of blue that differentiated the depth of the water. What I admired more though, were the cliff-climbers. How they work up the courage to let themselves be suspended along a cliff, let alone climb up one, I can’t imagine. I become nauseous just by looking over the edge, especially as I’m afraid of heights. To have that self-confidence, the determination, and perhaps even some recklessness to participate in such an activity is both frightening and awe-inspiring to me.

If the cliff-climbers could surpass personal fears and inhibitions to let themselves do this, then nothing in life would present an obstacle: how can resolving an issue at work be compared to putting yourself in a situation where one wrong move could cost you your life? I desire to have their drive.

Though my personal thrill does not come from mounting up the side of a cliff, it does require me to push outside my comfort zone. After this camping trip, I have travelled alone outside my province to Quebec, and outside my country to France to learn a language and to submerge in a new culture. There is so much excitement in visiting a foreign place and discovering more of who I can be, what I can do when bereft of what is familiar. I understand a little more of how the cliff-climbers must have felt. Doing what makes me nervous can bring more pride than doing what I already know.

My future, I know, will have more cliffs for me to climb, and I look forward to them. 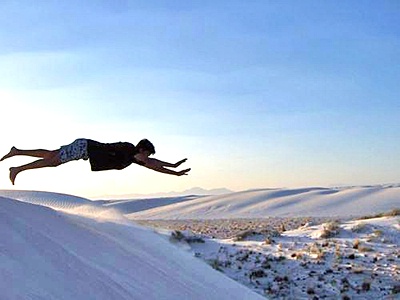