All I remembered about the house was it smelled funny. It wasn't a good sort offunny, like grandma's perfume or a musty basement, but a different sort. I wasstill undecided whether I liked the pungent smell of mothballs, fish and mustysalt spray that filled my grandparents' summer home on the Maine coast. Butnearly 13 years after my last visit, this smell was all I remembered.

Iwould be the fourth generation to share this home; it was built by mygreat-grandparents, lived in by my grandmother and frequented by my father andhis brothers. To the Braun family, it represented an eternal bond; to be a trueBraun, you had to love the seashore, this house and the funny smell containedinside. But to me, the house meant little more than a faint memory of afive-year-old girl attending her uncle's wedding.

I must admit I put up abit of a fight when I heard this smelly house, of all places, would be where Iwould spend a good part of my summer. There I had no Internet access, noStarbucks and, most importantly, no one but my family to keep me company. Isimply did not understand its allure. It seemed remote, desolate and boring. Butupon returning, my feelings toward the place changed.

As we opened thefront door, I was surprised to be met with the same smell as 13 years before. Itvaguely reminded me of my uncle's wedding and my aunt braiding my hair too tight.I soon realized this smell meant much more to my father. This smell was whatgreeted him decades ago when he went to visit his grandparents for the summer andwelcomed him home after swimming in the ice cold ocean. This smell reminded himof his grandparents, a bit eccentric, but always kind and caring. It was thesmell of childhood fun and what he and his brothers breathed during the mostenjoyable summers of their lives.

This smell was familiar to generationsof Brauns that had come before me, a strange sort of timeless link between thepast and present. This smell meant nothing to me but meant everything to myfather. So entering this house, with its funny smell, I understood just why thisplace is so special. 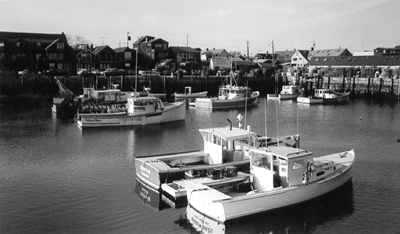 I live in Maine (not the super rural coastal part that is described, but I love it there) and I never want to leave. Granted, I do have internet access and do enjoy a Starbucks Iced now and again, but there's nostalgia here that I don't plan on leaving behind.