Pedal to the Medal | Teen Ink

Pedal to the Medal MAG

Jumping rope will always be dear to my heart. The last time I remember winning a contest was in second grade when I outlasted my classmates. Though the medal was paper, it was winning that made me proud. I savored that moment as my P.E. teacher carefully placed the medal over my head. I definitely was on the road to success.

As years passed, however, I became one of many students competing to make it to the top and my success rate began to falter. Sure, I won a few poem parties and races, but those accomplishments were small compared with my peers. Not only did they compete and win against classmates, they also challenged champions from other schools. My friends boasted about every area imaginable: sports, music, spelling bees, writing contests - you name it, they could do it. Sometimes I wondered if I was of the same species as those around me.

Often I would quietly watch the activity going on, trying to be cheerful for the others because I knew it meant the world to them, but I couldn't help but feel envious. While everybody had at least one area they excelled in, I felt so average: the child who got good grades, did well in sports, participated in music class, but never was the best at anything. I was just another person, my face hidden among thousands, with nothing to amplify my existence or my purpose.

Throughout junior high, there was lots of competitions where I had the chance to shine, including the talent show. All three years, I was cut from the show, each rejection more devastating than the last. It made me feel I had no abilities, nothing to prove my worth. What's worse is that during lunch and recess my friends would practice in "secret" and I would spend my time alone, walking around the playground kicking a ball. When the day of the show arrived, I would gloomily slump in the stands, wishing that I could dance as beautifully as that girl or act as well as that boy.

Eventually, I started to get used to the fact that I was just average. Often I would dream of being the star of a show, the champion of a contest, but realized that these were just thoughts and pitifully short of reality.

In ninth grade, my science teacher required each student to work on a project to enter in the science fair. Undoubt-edly I wouldn't win a prize, but I resolved to give it my best. I labored night and day, researching and adding more to perfect my project. The night of the judging, I sat silently, dreaming of awards and acclamations. The phone rang - I had an interview for my project. I was ecstatic! Never before was I given such a privilege.

I went on to win first in my category and advanced to the county fair. After setting up my project at the fair, I knew I had done well just to get that far. Pleased with my accomplishments, I realized I had finally done something that made me proud. I was beginning to find a place. No longer was I running along the sidelines, trying to find a gap to fit in, but a part of the circle, flowing with the joy and rhythm of life.

Two days later, I was called into an interview for the Country Science Fair and went on to win a medal. Its brilliance and beauty shone into my face. Sure, it was an object, but it represented me, the person who was actually something. This medal has opened countless doors. Even the smallest of people can find their places if they set their hearts to it. It could take weeks, months or even years, but in the end, they won't just be jump-rope champions, they'll be true champions. 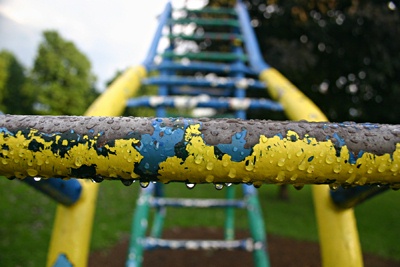