As a child and grandchild of veterinarians, I have always had an interest in animals and their health. Ever since I can remember, I have been following my father around his office to observe, learn and help.

One dark rainy night when I was ten, his beeper sounded around dinner time. When he called the concerned owner, I heard his half of the conversation.

“Hit by a car ... can’t walk, and she’s bleeding? Can you be at the office in ten minutes?” Dad asked, looking at his watch.

Before he could say another word, I barged in and asked if I could go with him. He agreed, and we went to set up the office for emergency work.

Carrying her “baby,” the anxious owner arrived in eight minutes and was a wreck, as anyone would be. The dog, Brandy, was a mixed breed, about 60 pounds and young. Wet and bloody, she was harmless despite her fear.

We carried Brandy to the treatment room for Dad to examine her thoroughly as I held her still and comforted her the way he had taught me. The real doctor worked quickly and carefully as the amateur one observed in amazement.

The x-rays I took as Dad held Brandy on the table determined that she had no breaks or fractures. A sigh of relief came from the owner. We washed off the grime that covered Brandy and when she was all cleaned up, we could tell she was feeling a little better. She even licked my face as if she wanted to say, “Thank you!”

With a soothing voice my dad told her owner, “She’s going to be fine. Just a few cuts and scratches.” He then told her about his bicycle crashes and all the road rash he’d had after his dates with the pavement. These anecdotes calmed and distracted the woman, and it was apparent that she left a lot looser than the tightly wound ball of panic she had been when she arrived.

Weeks later, a letter arrived from Brandy’s owner. She thanked me for helping heal her baby and being there for her, too. Enclosed were two photos of Brandy as a puppy. Looking at them made me feel as if I’d saved a life, that a puppy would be able to grow up and become a family dog, to be loved and give love back. It is one of those feelings that is indescribable.

I have learned that there are emotional as well as medical factors in being a veterinarian. Emotionally, the pictures of Brandy cannot compare to the Doctorate of Veterinary Medicine I hope to earn. While the degree will state that I am capable of providing medical attention, the photographs come closer to the heart, saying, “I helped her! I saved her!” 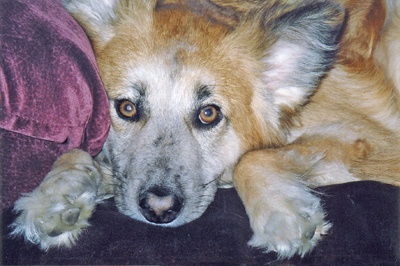